New Work: Hiking in the Dolomites of Italy 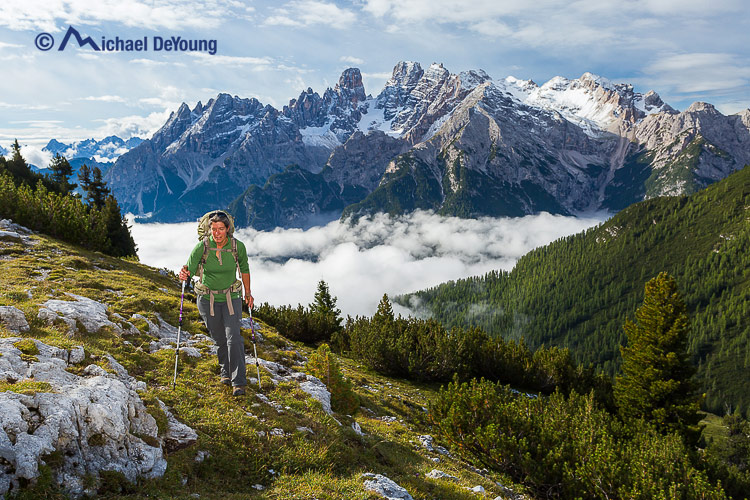 Hiker along the Alta Via 1, Dolomites, Italy

This is brand new personal work from our 11-day hike in the Dolomites of Italy. This trip was the closest I’ve ever come to having a real vacation since becoming a full time pro in 1992. Taking a break from the weight and effort of backpacking, we hiked from inn to inn or hut to hut with meals, beer and wine, warm bed and usually a hot shower. That is what made it more of a holiday than a “shoot.” 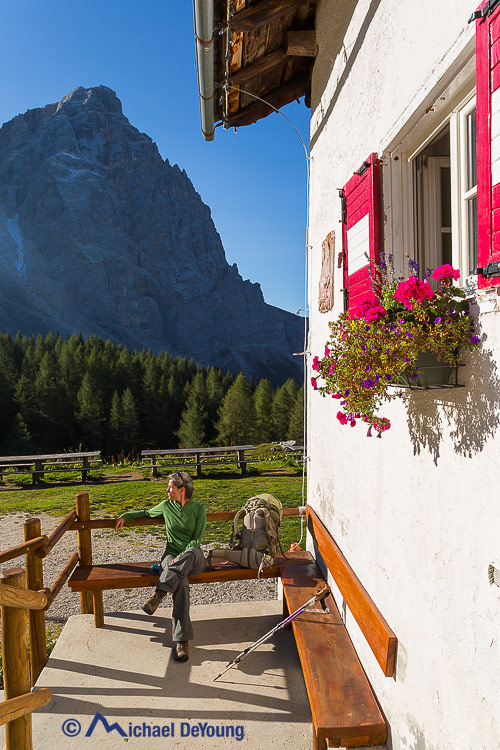 Lauri relaxing in the morning sun at Rifugio Cita di Fiume, along the Alta Via 1, Dolomites, Italy 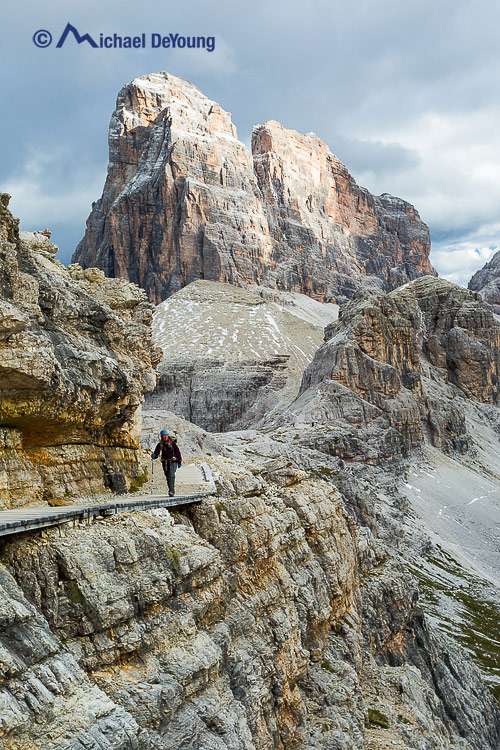 For a photographer to truly be on holiday would mean no camera, right? Going to the Dolomites without a camera? Yeah right. I admit it, I’m as bad as the person who has to bring their work laptop with them on “vacation.” I’m cursed as a photographer and perfectionist. It’s unthinkable to go to a place like the Dolomites, holiday or not, without a tripod and a 70-200 lens  (my workhorse mountain landscape lens). The rest of the gear included a 5D-3, 17-40 lens, 600RT and a few accessories. All of this I carried in my pack every inch of the trail. 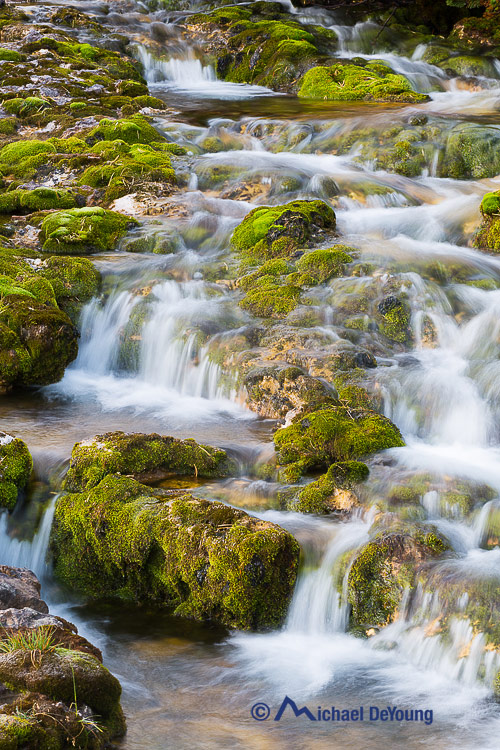 My pack weighed in at 30lbs in which half this weight was photo gear. This was lighter than my standard week-long wilderness backpack but much heavier than most of the packs of other trekkers. I forgot that without the time needed to set up and break down camp and cooking meant longer hiking days when doing inn to inn style trekking. I (and Lauri too) felt the burden of our packs on some of the longer hikes with long and steep climbs. 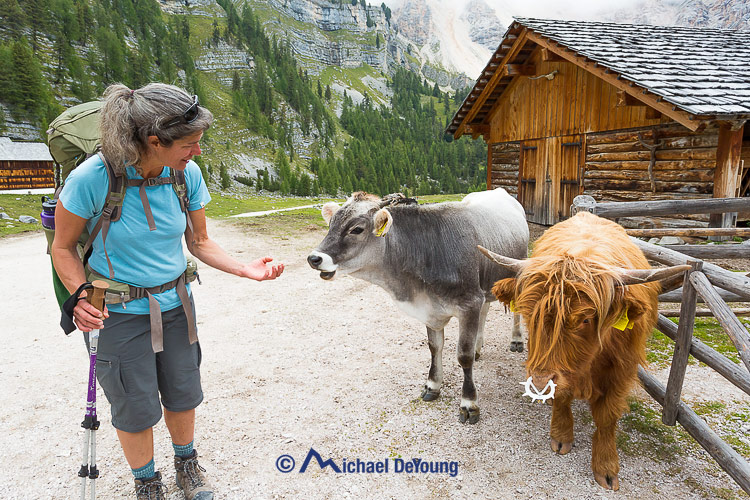 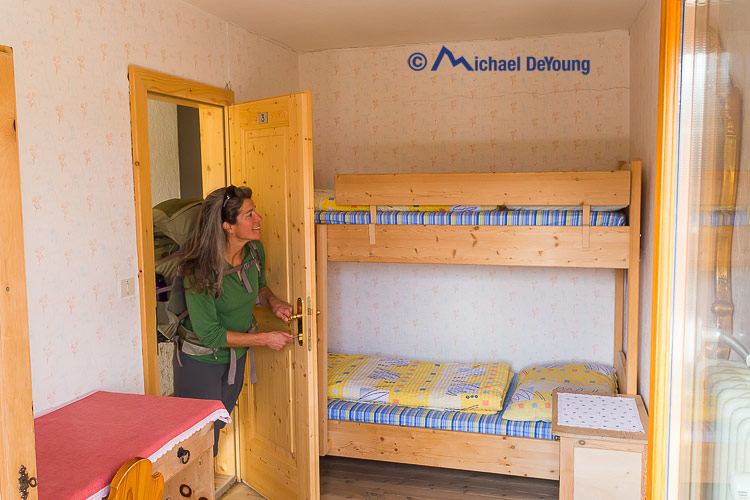 Checking in to the Senes Hut, Alta Via 1, NaturPark Fanes-Senes, Dolomites, Italy. This is a private hut instead of an Italian Alpine Club hut. We had a private room here but with typical communal bathrooms or “water closets” All of our rooms were small but cozy and warm with a nice down comforter. Pretty posh after pounding the trail all day. 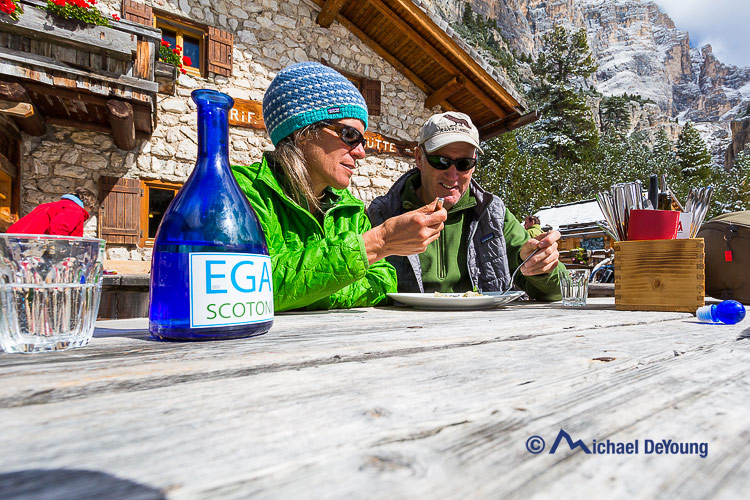 Stopping for lunch of fresh hand made spinach ravioli and local bottled water at Rifugio Scotoni along the Alta Via 1, Dolomites, Italy

We basically did the Alta Via 1 to Passo Duran and the Tre Cime-Lavaredo circuit. I won’t go into day to day detail of our route since this information is widely available on the web. The Tre Cime is the iconic image of the Dolomites, and every photographer and their brother shoots there. It is similar in popularity to North American photo icons like Delicate Arch, the Tetons from Oxbow Bend, and the Maroon Bells. 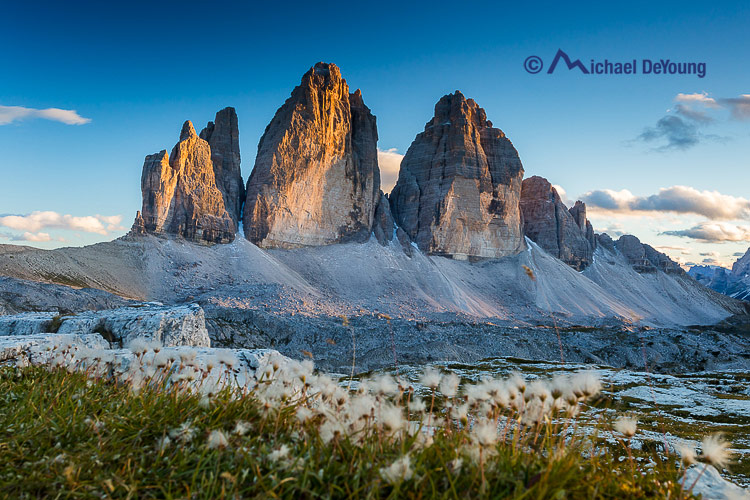 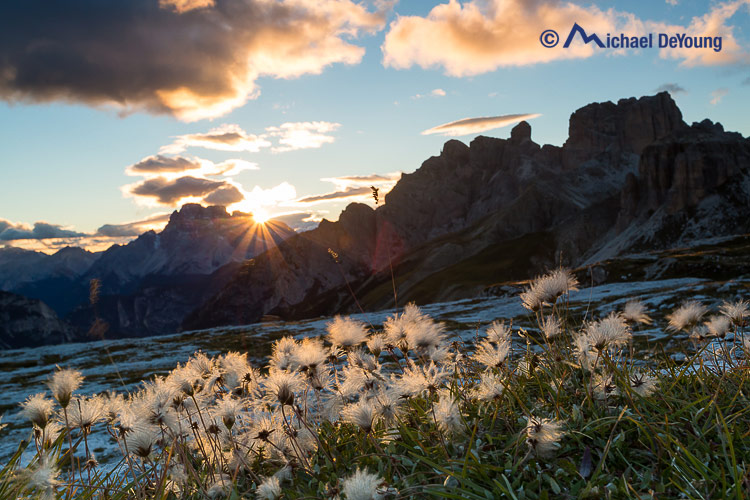 The photo potential in the Tre Cime di Lavaredo is simply stunning but it was far more crowded than I expected. Next time I’ll skip the Locatelli Hut as that was the most run down, most crowded and noisiest hut we had on our trip.  I’ll hike the extra hour to the smaller and quainter Cengia Hut.  I thought the other peaks around the area were more visually interesting than the Tre Cime. We planned two days to capture some of the landscapes but unfortunately it was windy and very unseasonably cold while there.

We woke up to 4 inches of new snow the morning we hiked out of Fanes hut to Lagazoui. We were prepared for it and had no problem keeping comfy in the winter like weather that dominated our trip. It started out windy, overcast and cold but luckily the wind calmed down and the sun came mid morning where we stopped for an hour and did some nice winterish hiking and landscape photography. This was the second day we hiked nearly all day with snow on the ground. 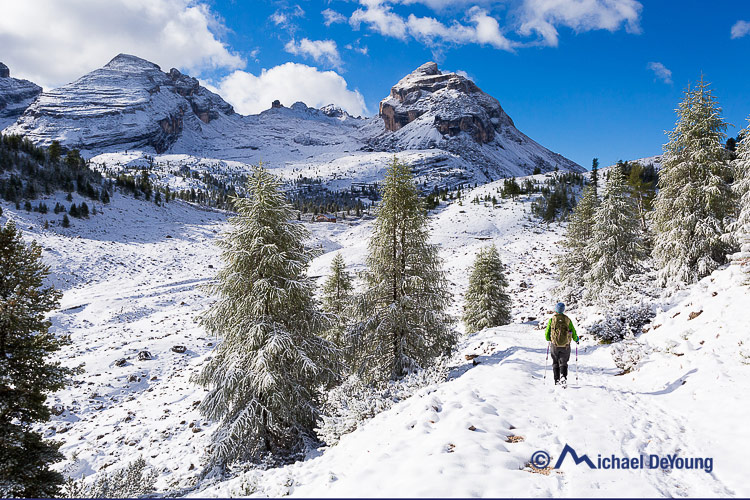 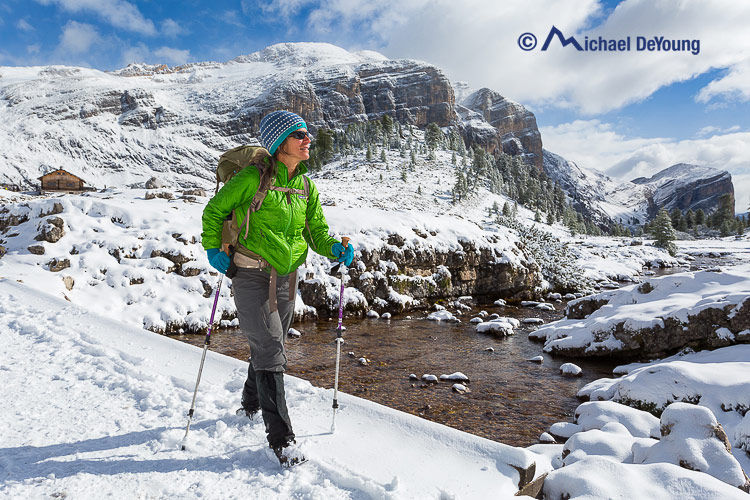 Along the Alta Via 1 my favorite section and day hike was from Passo Giau to the Cita di Fiume Hut. This section was dominated by verdant green rolling alpine meadows surrounded by classic Dolomite big limestone cliffs and peaks. This was the day the snow melted and it finally started to warm up to very pleasant mid September conditions. 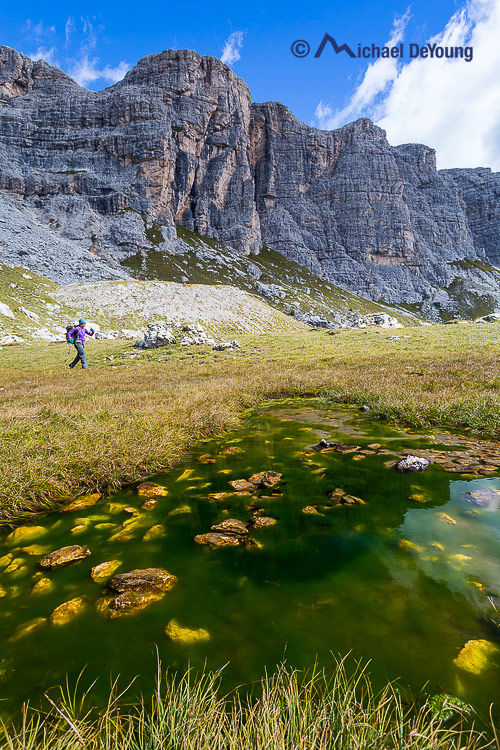 Hiker along Alta Via 1, Dolomites, Italy

The final descent to the Cita di Fiume hut with a commanding view of the Pelmo in evening light was almost storybook like. 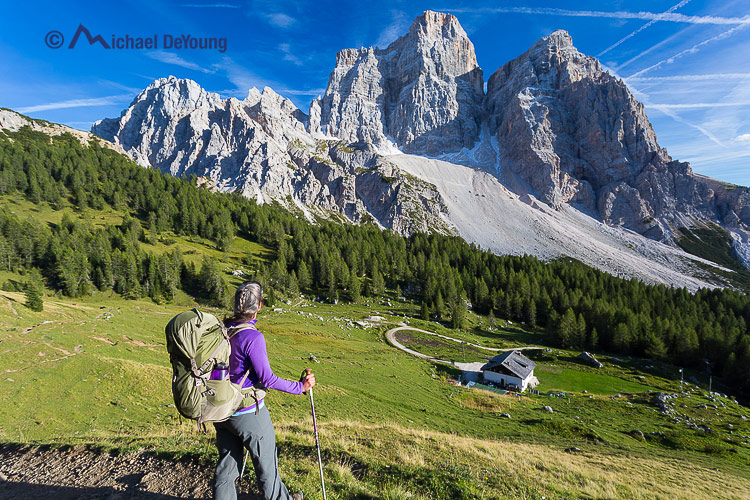 Lauri on final descent Rifugio Cita di Fiume, below the Pelmo along the Alta Via 1, Dolomites, Italy

Our one and only decent mountain sunrise with glowing orange Dolomite peaks was here at Cita di Fiume. Like every other morning, I was up at 6AM to get ready for possible morning light. Doesn’t everyone on holiday do that? 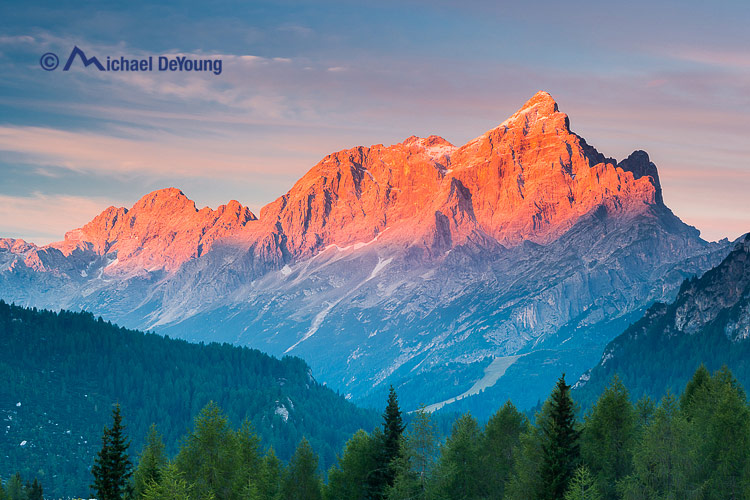 Sunrise on Monte Civetta from Rifugio Cita di Fiume, along the Alta Via 1, Dolomites, Italy 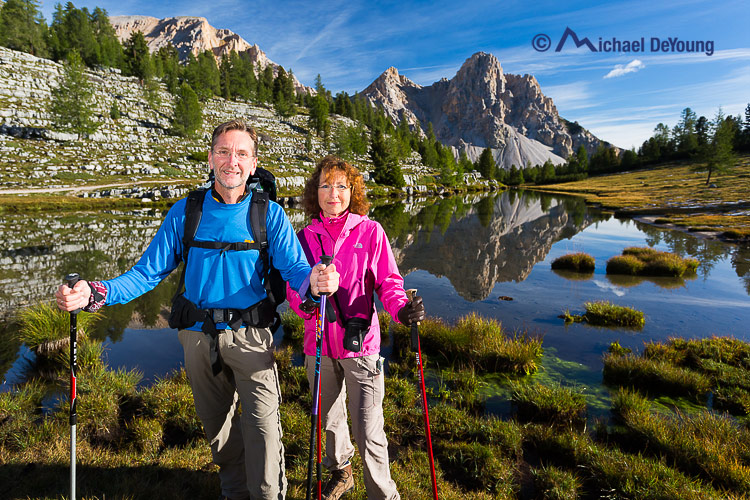 Dutch hikers Dolf and Dianne, just 2 of the many nice and interesting European hikers we met along the way. Alta Via 1, NaturPark Fanes-Senes, Dolomites, Italy 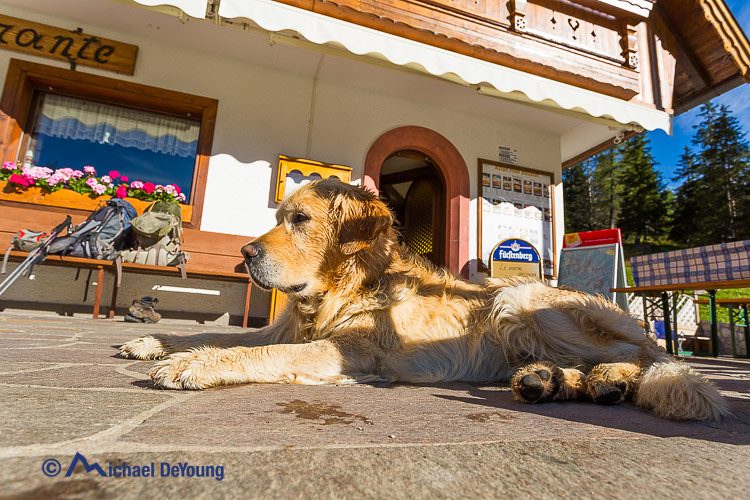 Sioux, the golden retriever at Rifugio Staulanza, Dolomites, along Alta Via 1 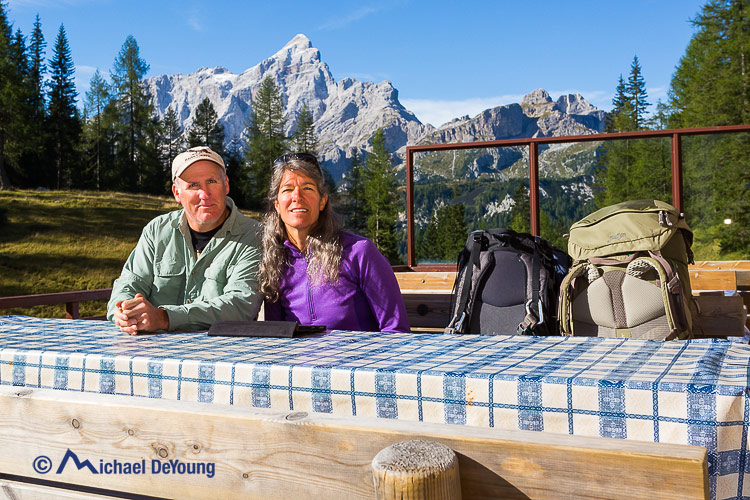 Self Portrait of Lauri and I at Rifugio Staulanza, our last night in the Dolomites 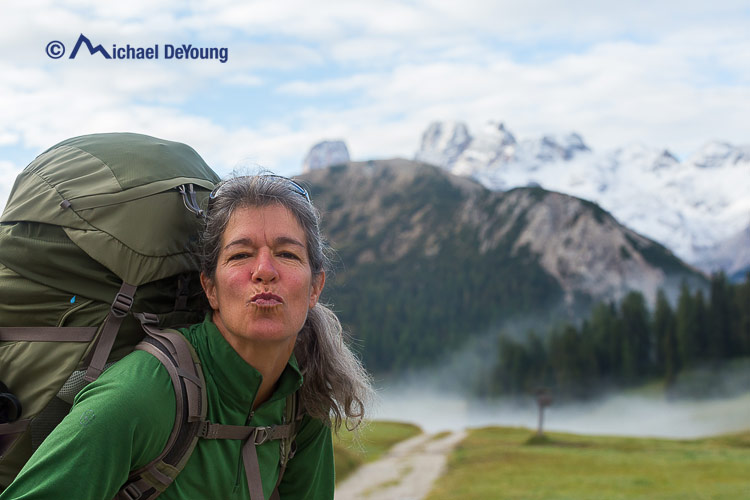 Lauri along the Alta Via 1, Dolomites, Italy