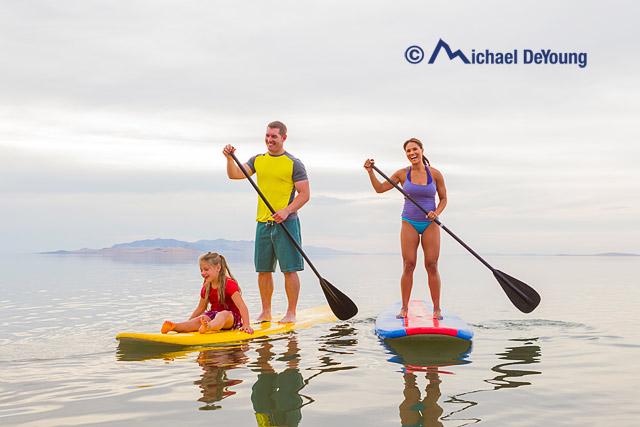 Family stand up paddling on the Great Salt Lake near Ogden, Utah.

My first stand up paddling shoot last summer seemed like it was circling the drain before it even started. I arrived at the Great Salt Lake about an hour before the talent (a family of 3) did. Forest fire smoke and thick high clouds delivered flat lifeless light and the mountain vistas that I was envisioning as a backdrop just were not going to happen. On top of that is was miserably hot like 100 degrees even with overcast skies! Understandably, my talent seemed sluggish at first to take to the boards. I began to question my judgment of doing a shoot with people who’ve never been on stand up paddle boards. The heat was getting to me. They were amazing athletes and after a half hour or so they began to take to the boards.

I still was not convinced at the time that I’d produced anything worthwhile and creative – mainly due to the normal stress that comes with every production on top of the heat stress. From past experience I new better than to edit in the field. Something inside my head that could not be articulated at that moment told me to just keep on shooting. And that’s what I did.

For about half an hour the air became very still and surreal and the reflections were amazing. The near sunset sky became slightly warmed and very pastel like. The talent was relaxed and had a rhythm going. All I had to do now was apply some skillful off-camera speed light and I had a fighting chance of getting something decent.

Another shot from this series is a finalist in a national contest, the Great Outdoors Photo Contest. I won’t know where I placed until the August issue of PDN comes out.

Even after 20 plus years of shooting I rarely know how successful a shoot will be until I look at the results on the computer. Sometimes it goes the other way. On another recent stand up paddle shoot I had great talent, great light at a location I was familiar with and I had half a dozen pre-visualized shots in my memory bank. I was just not on top of my game that morning. Shit happens. To all of us, pro and hobbyist alike.

Let the outcome be what it will be. Just remember – DON’T edit in the field and DON’T give up until the light is gone.