Now that the first day of winter is close (though winter began months ago in some places), there is no reason to put your photography in hibernation! In fact, my favorite light of the year is winter. This is mainly because the sun doesn’t get as high in the sky and thus, yielding more hours with great light. 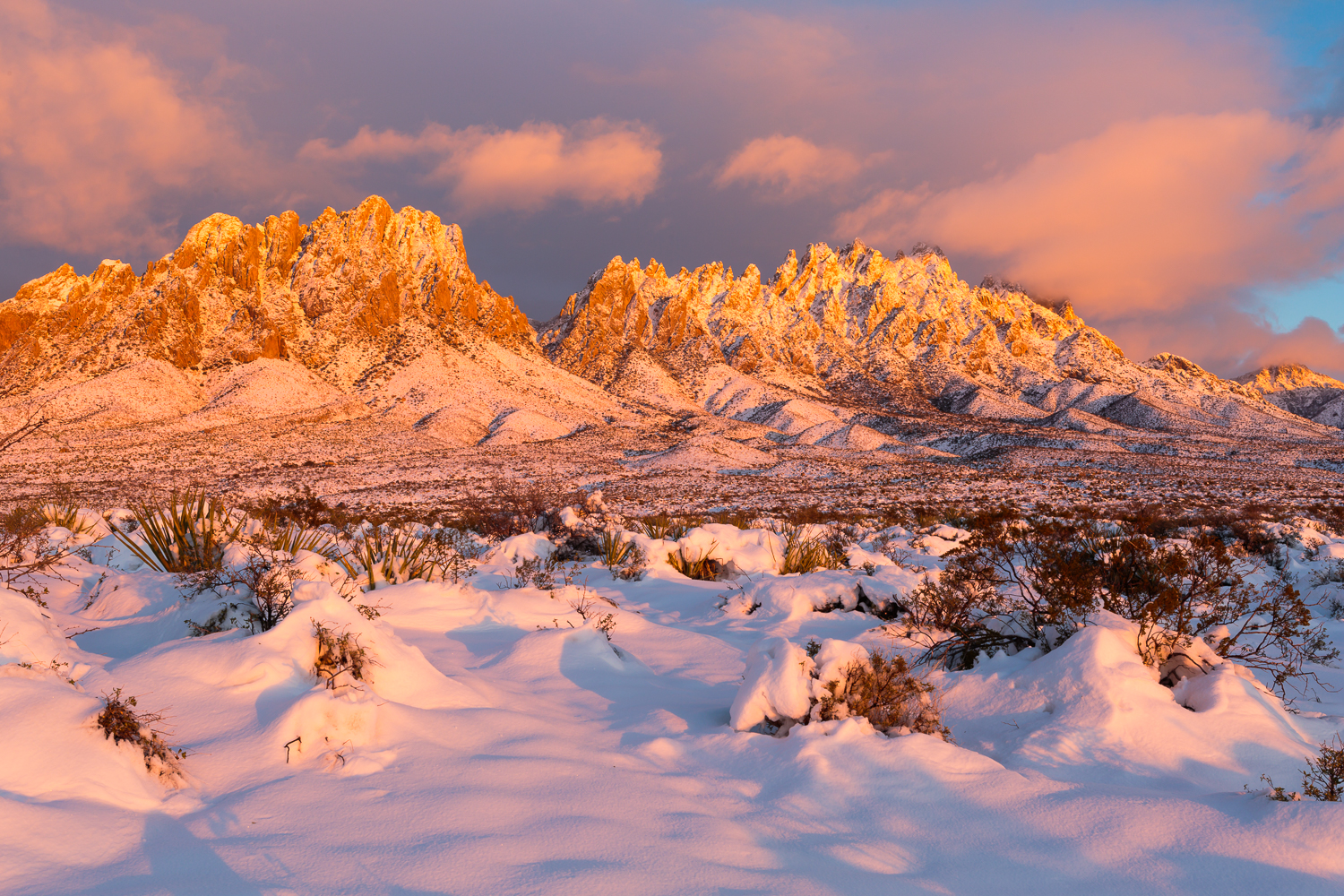 I spent much of the afternoon a few days after Christmas last year searching for the location I wanted to shoot sunset from. The night before it had snowed heavily and the forecast was for clearing skies later in the day. This was a predictable “great light” scenario over the Organ Mountains in southern New Mexico after nearly a foot of fresh snow. This was a very cold airmass for southern New Mexico and as usual, cold air yields warm winter light.

Generally speaking, if you live in a location that has real winter, defined by frequent temperatures below freezing and snowfall, the colder the air the better the light. Cold air produces warm light and winter landscapes in warm light make fantastic images. It may be uncomfortable on my fingers, operating the camera in well below freezing air, but very cold air, especially shortly after a frontal passage, often contains ice crystals suspended in a cloudless atmosphere. These ice crystals create backscattering and reflection of the longer (warmer) wavelengths of the visible light spectrum back toward the light source often creating a pink alpenglow opposite of the sunrise or set. High humidity in the lowest levels of the atmosphere in sub-freezing air can also produce a beautiful warm color wash shooting into the sun. 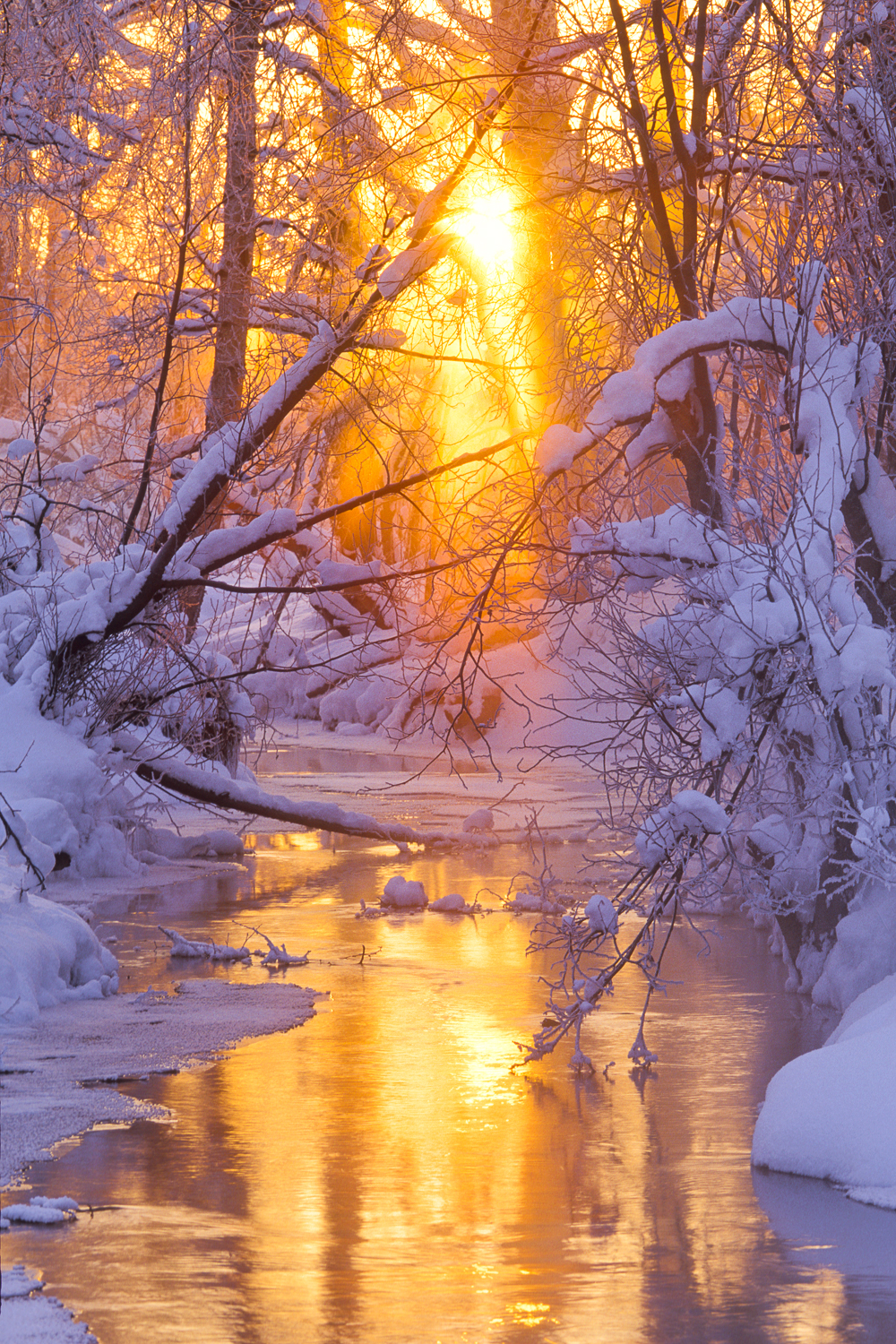 This was one of my best selling winter images ever. In a very cold (highs remaining below zero) airmass, I found a small body of water near Anchorage that didn’t freeze. Water vapor rising into the very cold air scatters the light creating a warm glow shooting the setting sun. This image follows the cold air-warm light formula.

WHEN TO SHOOT: I study forecast transitions in weather patterns. Pay attention to the forecast changes from clear to stormy weather and visa-versa which usually produces the most dramatic light. Approaching storms in the mid-lattitudes often produce dramatic and colorful clouds at sunrise and storms that clear in the afternoon often produce rich vibrant colors at sunset, especially if associated with a fresh snowfall. I also look for fog, especially if you live in hilly or mountainous regions where you have a chance to get above the fog. If you wake up and you can’t see across the street, rejoice! Grab your camera and try to get to the edge or top of the fog layer. That is where the photo magic is happening. 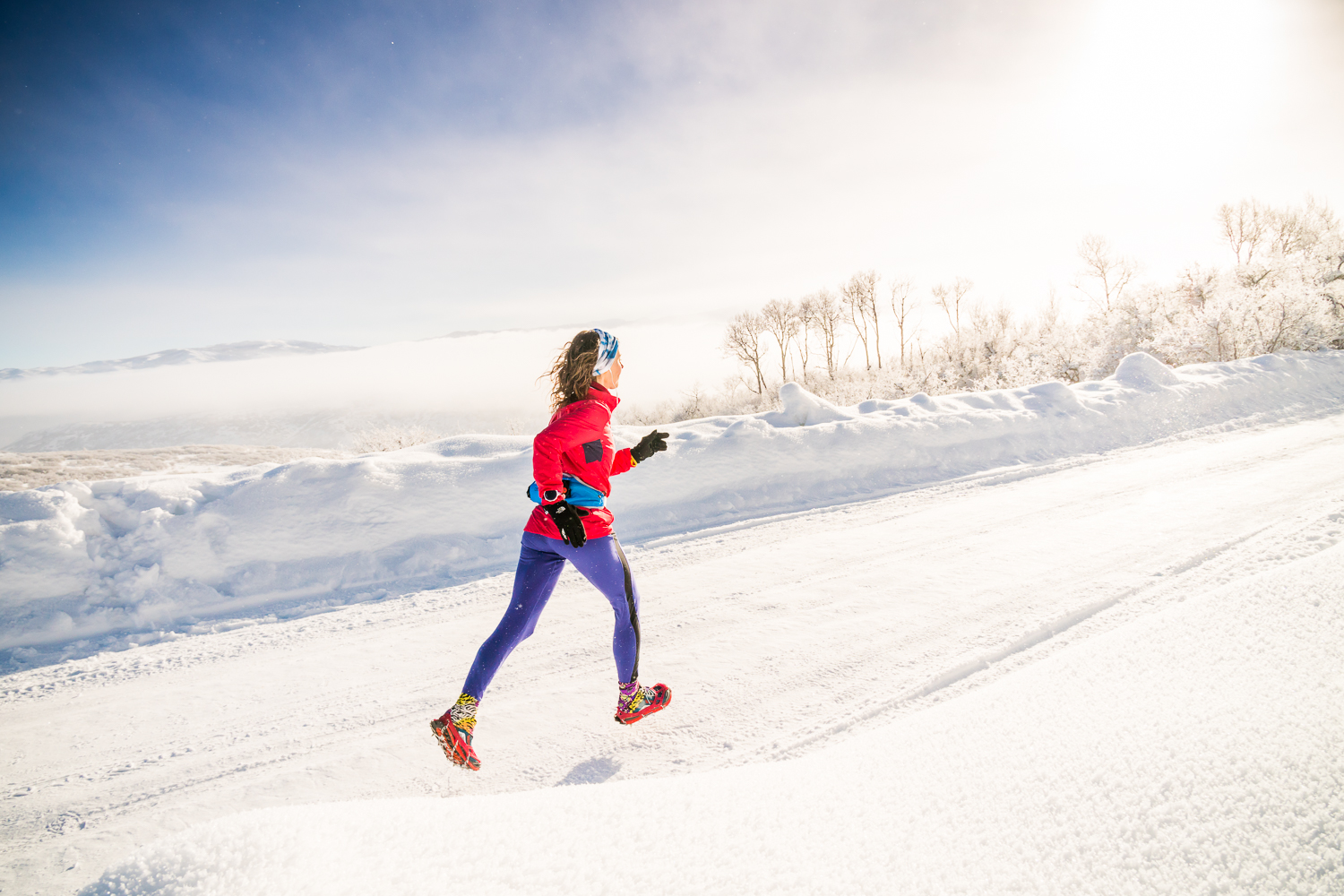 This shot of a runner is from Park City, Utah a valley that gets frequent winter fog. In the valley, it was grey and dismal (and colder) Driving to the top of the fog yields this crisp backlight with a high-key soft box feel. The freezing fog was at this height earlier and deposited “dew” on the snow, known as surface hoar giving the snow a bright crystal look.

TECHNIQUE: Snow is the easiest thing to shoot and expose for. It is nature’s best fill card, bouncing light everywhere and allowing for images not possible without it. You can shoot snow-covered spruce trees into the sun with amazing detail on the shadowed side. Over expose from what your meter is saying to bring your snow to a crisp bright white, otherwise, your images will be underexposed and muddy. Don’t forget to shoot images while snow is falling, especially if the flakes are big. When this happens you can get the most dramatic results if you place your subject, a person or animal (wild or domestic), against a dark background such as evergreen trees. Shoot with a telephoto lens to make dramatic images of falling snow around your subject. Pay careful attention to your focus. Snow falling in front of your subject can make your AF search needlessly and focus on something other than your subject. More often than not, I manual focus when I’m shooting in falling snow. I love portraits in falling snow which beautifully enhances bokeh. 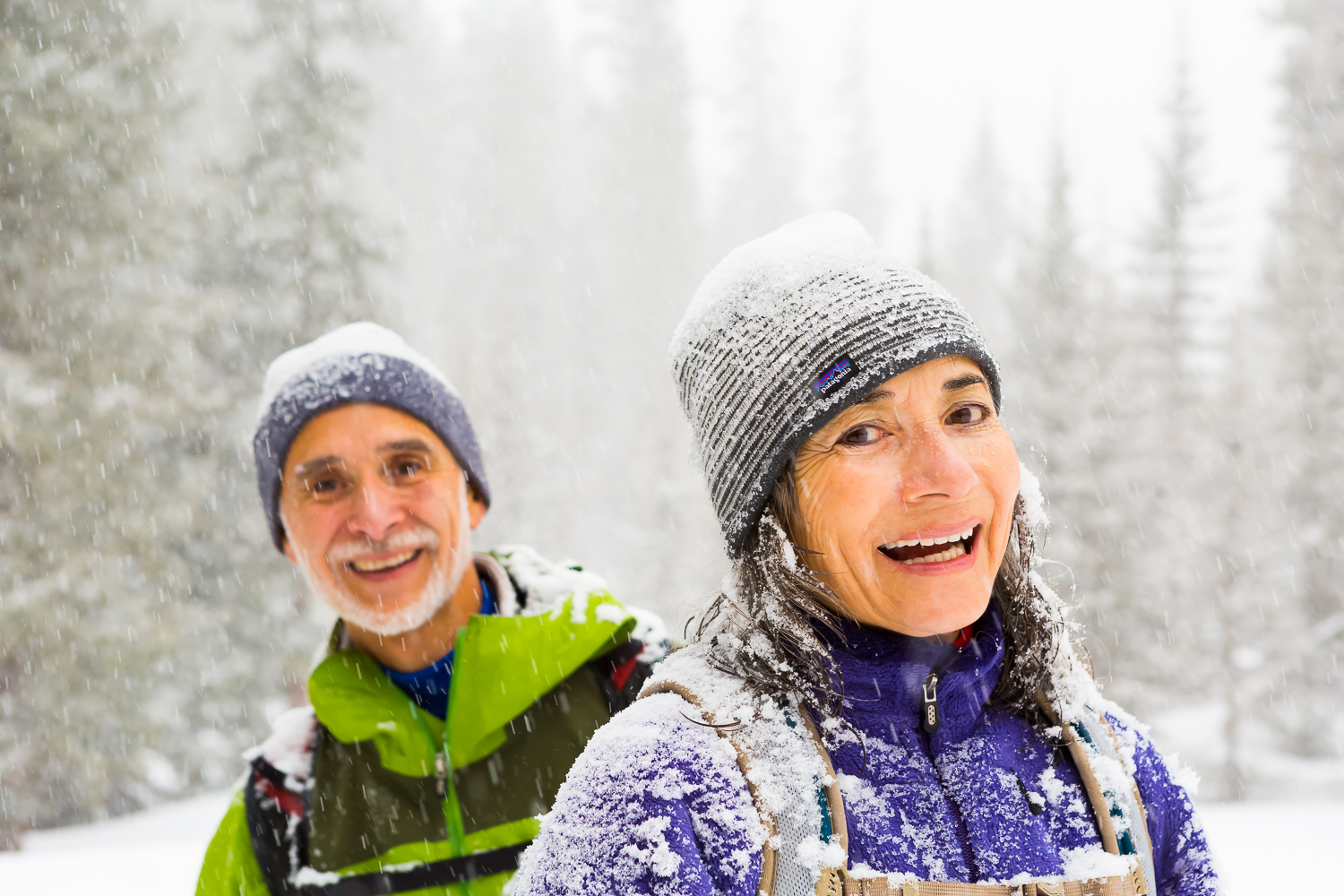 I love shooting shooting during falling snow. The soft bright light is great for skin tones and portraits. Images in falling snow can yield great results. Using dark colors on your subjects and dark backgrounds enhance the feel of the falling snow. The falling snow feel is even further enhanced by the using telephoto compression. This shot of a happy couple in Taos Ski Valley, New Mexico was shot at with the exposure compensation at +2/3 or .7 of a stop above what the camera meter read to brighten the subjects’ faces.

The most appealing and best selling winter images (tracking sales reports) are of two things: really warm light and alpenglow, fresh snow with a winter wonderland looking landscape, and portraits in falling snow. In general, the coldest air, especially after a fresh snow, produces the warmest light with pink and orange sky and clouds. 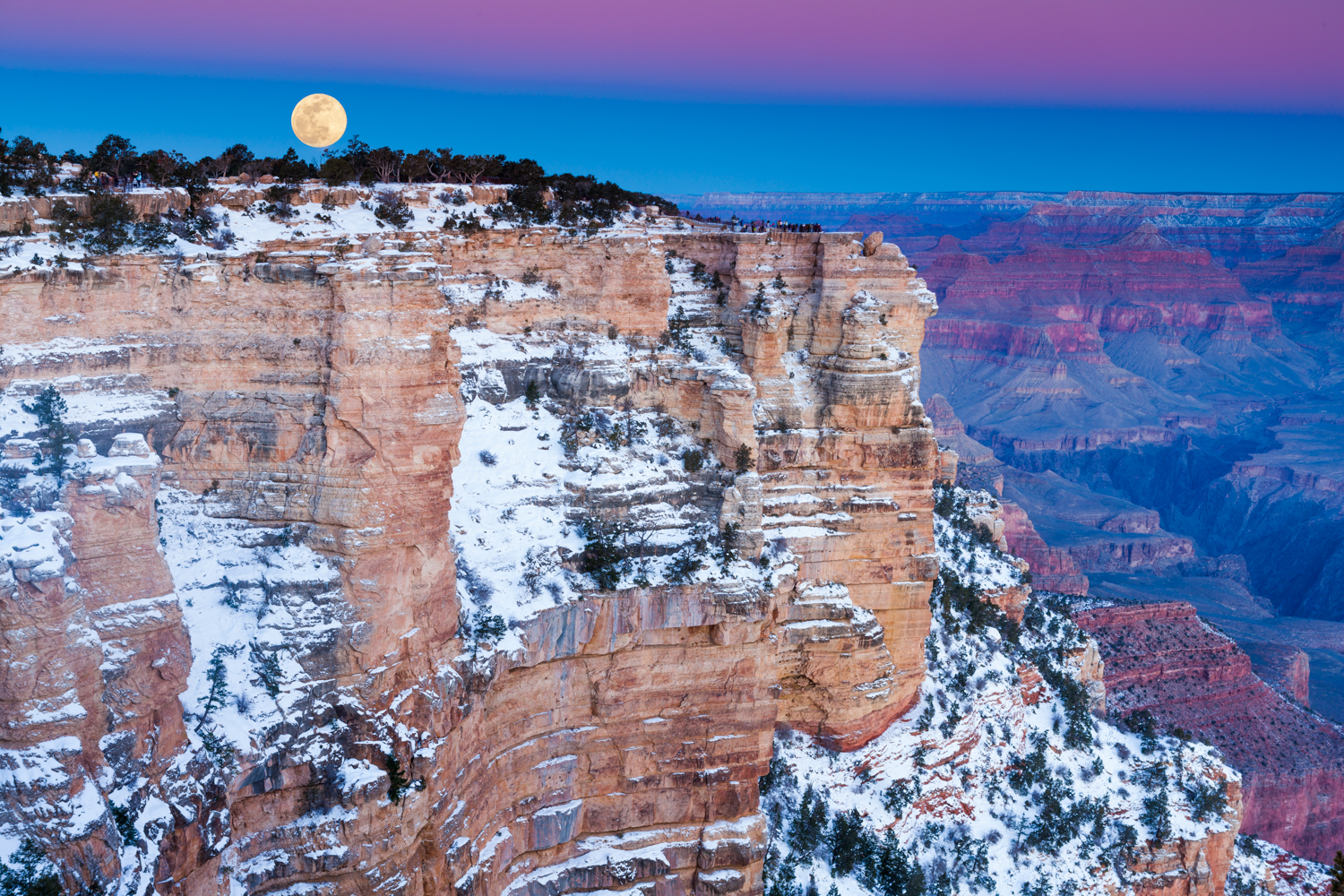 This was a dawn alpenglow shot of the setting moon on the South Rim of the Grand Canyon in late December. This was 2 days after a snowfall and the morning temperature was around zero Fahrenheit. 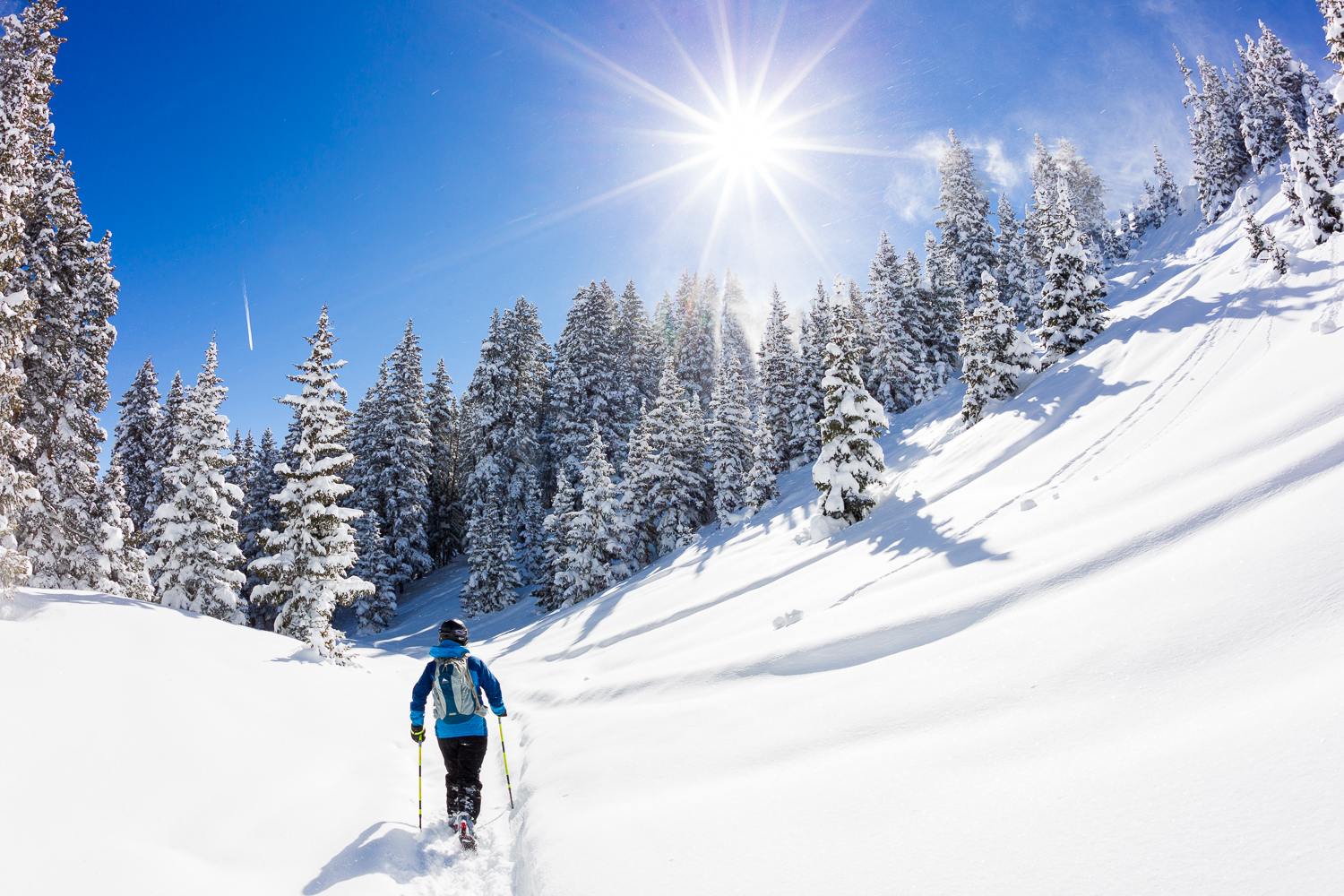 My favorite light is backlight and shooting into the sun is my favorite tactic to render a scene. Had this been a hiker in a snow-free setting with the dark spruce trees, this shot would not have worked. The fresh snow and “winter wonderland” look reflecting light everywhere is what makes all the detail on the shadowed side of the trees and skier possible.