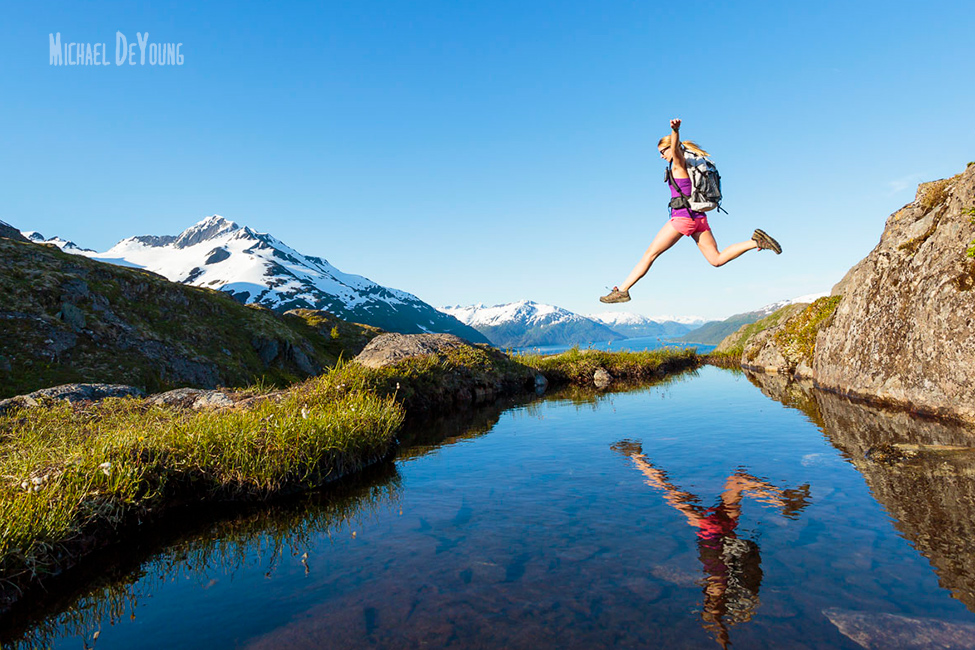 To balance out images that show contemplation and meditation (a person just sitting and watching a sunset) I try to shoot active hiking images as much.

1. Have your camera ready to shoot. Carry it on your chest, shoulder strap or hip belt. This is easy with a smartphone but a bit more challenging with a DSLR. Use a chest harness or shoulder/hip belt. Don’t rely on taking off your pack every time you want to take some photos. Simply using a neck strap and having your camera bouncing off your abdomen as you hike down the trail is awkward, uncomfortable and increases risk of damage to the camera. 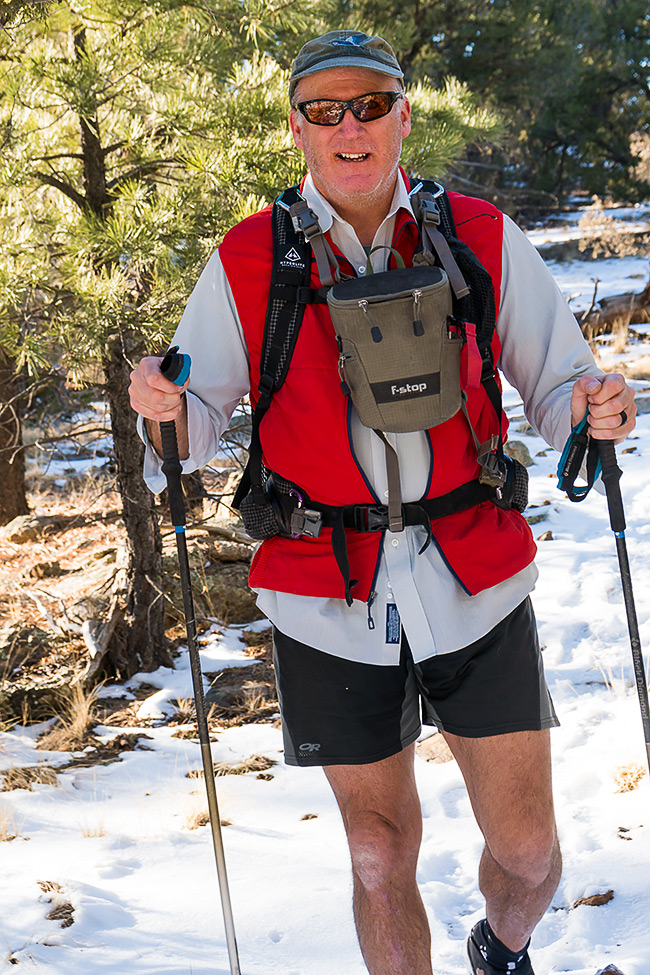 Michael on a day hike on the Continental Divide Trail in New Mexico. We were scouting while on an assignment for Backpacker Magazine for a Gear Guide shoot. Michael uses an F-Stop Navin case with 4 attachment points to his day/overnight pack (a Hyperlite Mountain Gear 2400 Southwest). Inside is his APS-C sized mirrorless camera – a Sony A6300 with Sony-Zeiss 16-70F/4. Other chest holder pouches that can be configured to carry a lightweight system are made by Osprey Packs and Mindshift Gear.

2. Camp High. Most campers/backpackers like to nestle in shelter in lower lying areas, close to water. When camped in a valley, the sun goes behind terrain or stays behind terrain in the morning, long before or after the colors and light are at their best. Yes, being up high means risking exposure to weather. You need a bombproof tent and the knowledge to pitch it correctly but up high is where the best light and views are! It doesn’t always mean camping on ridge tops, but ideally, high enough to catch twilight and the very first and last rays of light hitting interesting terrain in both foreground and background. Even in desert locations like the Grand Canyon, we prefer to carry water a little ways to a high dry camp with better views and light. 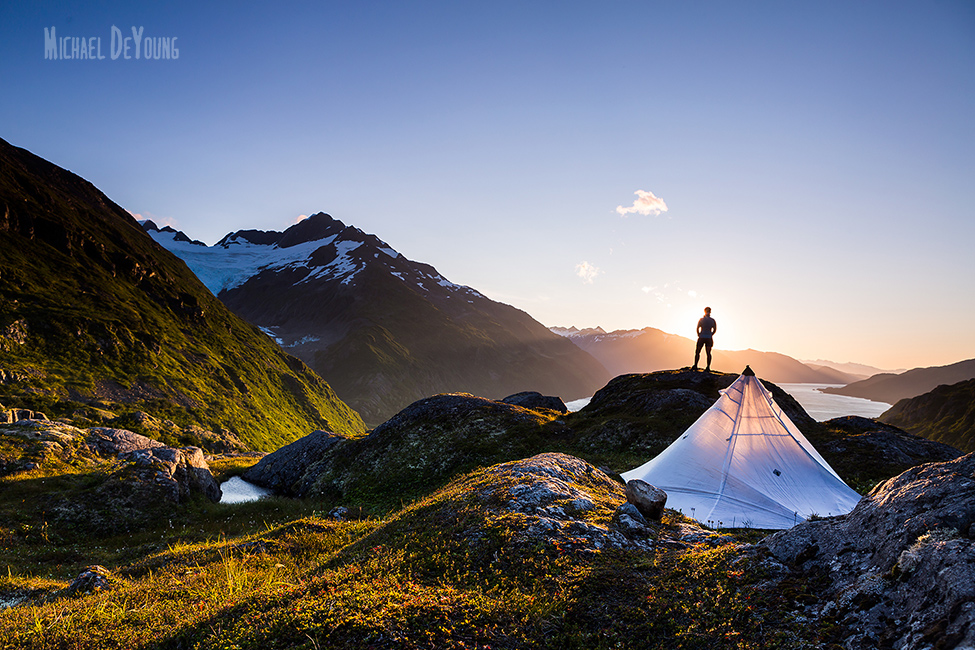 Camped at Portage Pass, with open sweeping views, Lauri waits for sunrise over Passage Canal and Prince William Sound. We were pounded all night by strong winds off of Portage Glacier, but we use a bombproof pyramid tent from Hyperlite Mountain Gear. 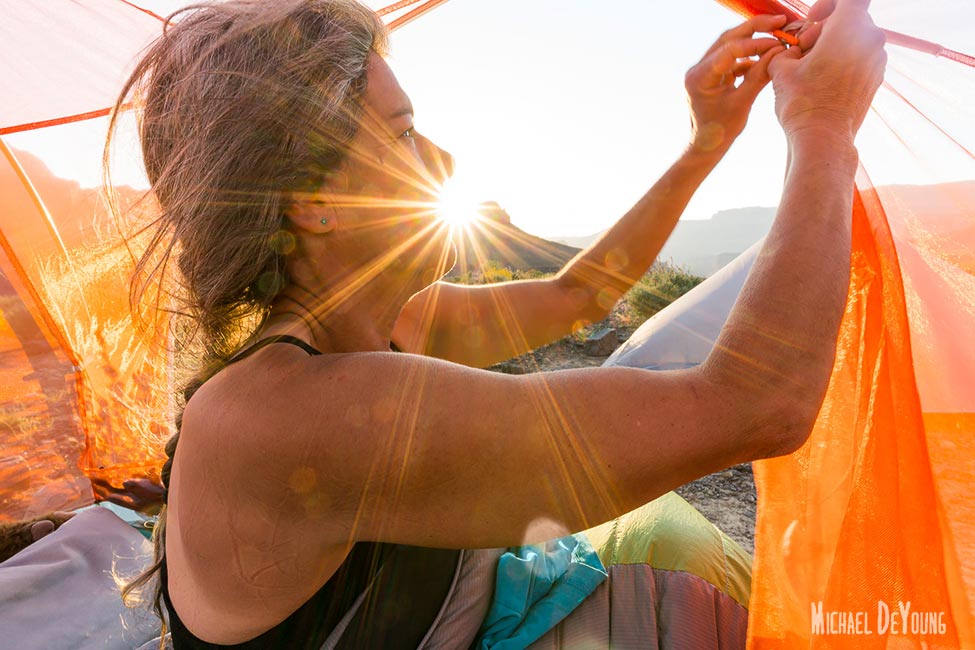 We always strive to camp in open country as in this campsite on the Tonto Trail in the Grand Canyon National Park. This is Lauri at first light, getting up to start our day. Whenever possible, Michael tries to facilitate images that depict what happens before, in-between, and after the act of hiking/backpacking, such as this camp scene. Yes, he sleeps with his camera in the tent, or within arm’s reach in the vestibule and leaves it set up for shots like this.

3. Start early, end late. Duh! Sometimes you have to state the obvious but the best light is at the ends of the day! And if you are up high, you stand a better chance of capturing magical light than if you are in trees or canyons. We like hiking late or pre-sunrise to get the best hiking in the landscape imagery. Twilight, alpenglow and night images also work better in open terrain. If you have a sturdy but light tripod or you are in open country with rocks, you can stabilize your camera and take long exposures, say in the 1/4 second to 20 second range and capture the soft colors of twilight balancing with the light of a headlamp or tent light. It is not uncommon for us to hike to a pass or ridge for a sunset and return to camp or trailhead under headlamp. 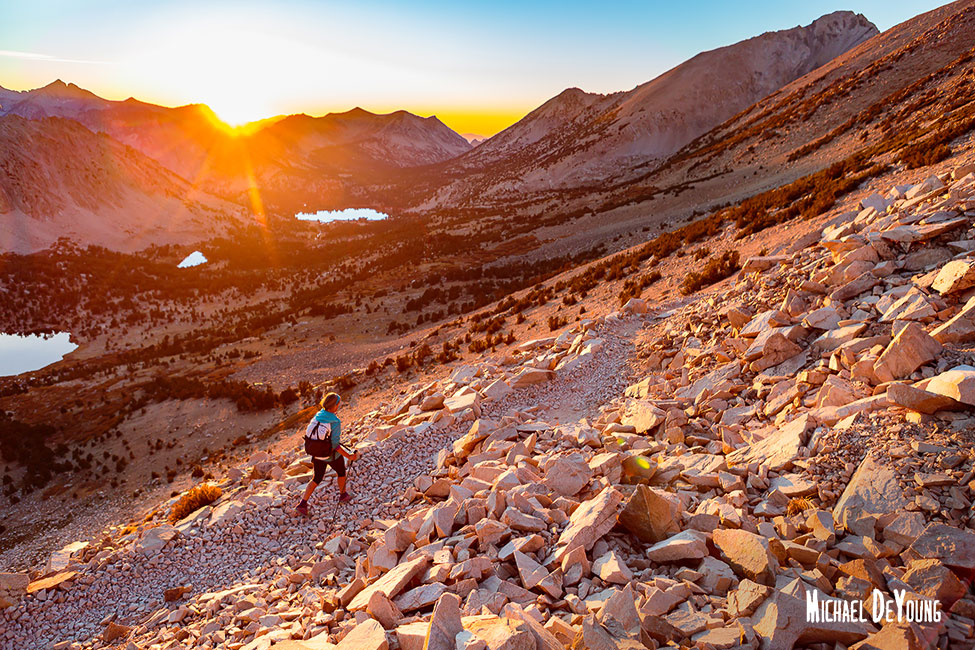 We hiked 7 miles to Kearsarge Pass on the border of Kings Canyon National Park in the Eastern Sierra to capture the best light at sunset! With a well defined trail, it wasn’t difficult to do our return hike at night.

4. Photograph people more and avoid direct sunlight on faces.Don’t just focus on the act of hiking within a beautiful setting. Focus on what happens before, in between, and after the action.

As far as lighting people goes, direct sun on faces is harsh and unflattering. Shadows under hat brims, eyes, under the nose and chin will appear darker and harsher in a photo than they do to the naked eye. The only exception to lighting a face with direct sun and getting flattering results would be when the sun is literally sitting on the horizon going through maximum atmospheric to soften the harsh sun. 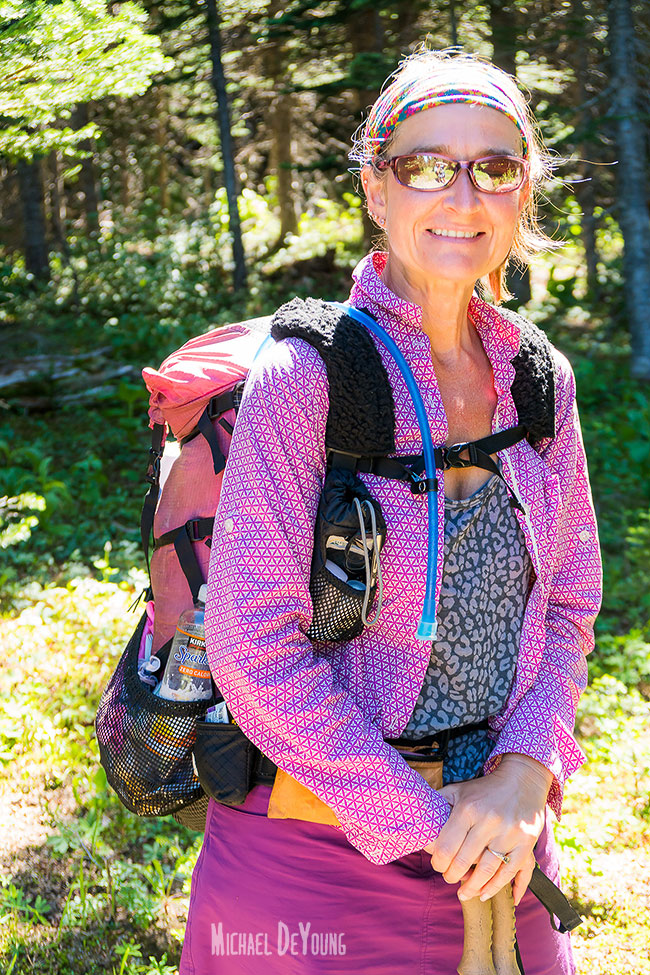 On this hiker portrait of CC (Color Coordinated) on the PCT in Washington, it was harsh mid-day light and Michael had no lighting equipment. The only way to get a decent portrait was to turn her away from the sun, overexpose the image to make her skin tones bright, and use the little pop-up flash.

The best natural light for peoples faces is on bright cloudy days. On sunny days, turn your subject away from the light (backlight) and place them against a dark background such as shadowed rock cliffs or dark forest. The goal is to keep the light even and soft on your subjects’ faces. (To avoid faces appearing muddy and dark, see tip 5 below.) Most backpackers do not carry a flash (strobe, speed light) with them on the trail. But, many point and shoot cameras and lightweight mirrorless cameras come with a little pop-up flash. If you have one, use it! They are great tools for filling in harsh facial shadows in hard sunlight. The trick is to stay close. When using a small flash the effective range is almost always closer than 8 feet.

Bright overcast is the best light for flattering faces and portraits. When we have these conditions, Michael throttles back on small hikers in a big landscape and focus on candid moments such as this. 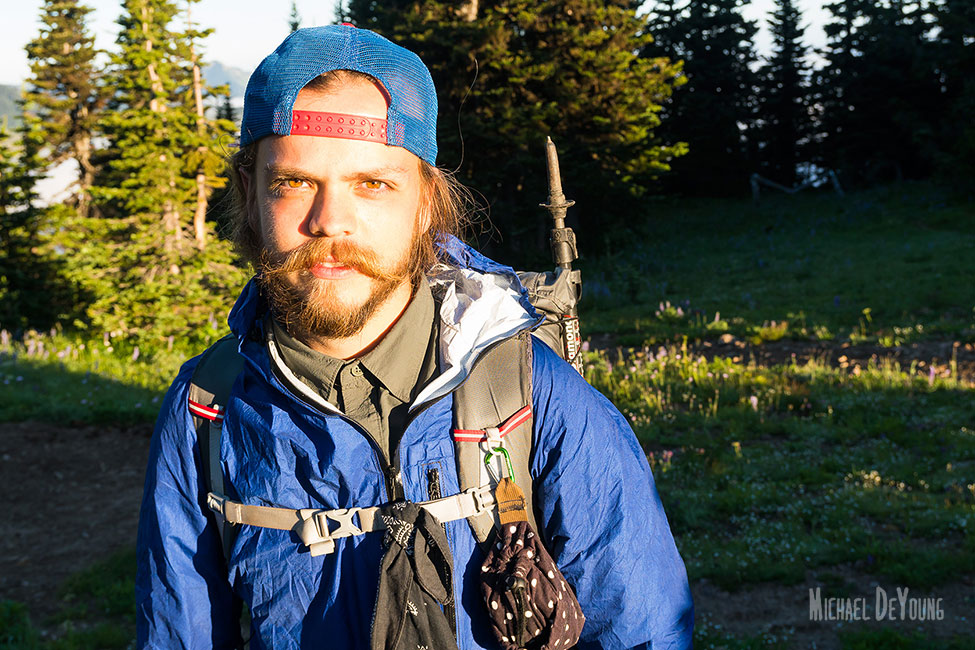 On this hiker portrait of NeeMor on Scout Pass on the Pacific Crest Trail in Washington, the sun had been up less than a minute. This is the only time we would use direct sunlight on a portrait.

5. Add light to bright scenes.Yes, you heard that right. Most landscapes involve lots of sky, water (we all love shooting alpine lakes) and/or snowy landscapes. All these surfaces are brighter than middle tone and can fool light meters even in pro level cameras. Even though high-end cameras divide the image area into multiple zones (referred to as “evaluative” or “matrix” metering) and average them, if most of the zones are bright, then your meter reading will be faulty. This is because your meter renders whatever it is averaging to be middle tone. Sky, even with dark clouds, reflective water, light colored rock and snow are all brighter than middle tone! So add exposure to your camera’s reading to bring the tones described above back to where they need to be.

When photographing faces as described in tip 4, where you turn your subject away from the sun, their faces will appear dark and muddy, unless you add light to your camera’s suggested exposure. Many cameras today, including DSLR’s and mirrorless, will allow you to dial in exposure compensation (adding light) when you are using a program mode such as full automatic, aperture, or shutter priority modes. 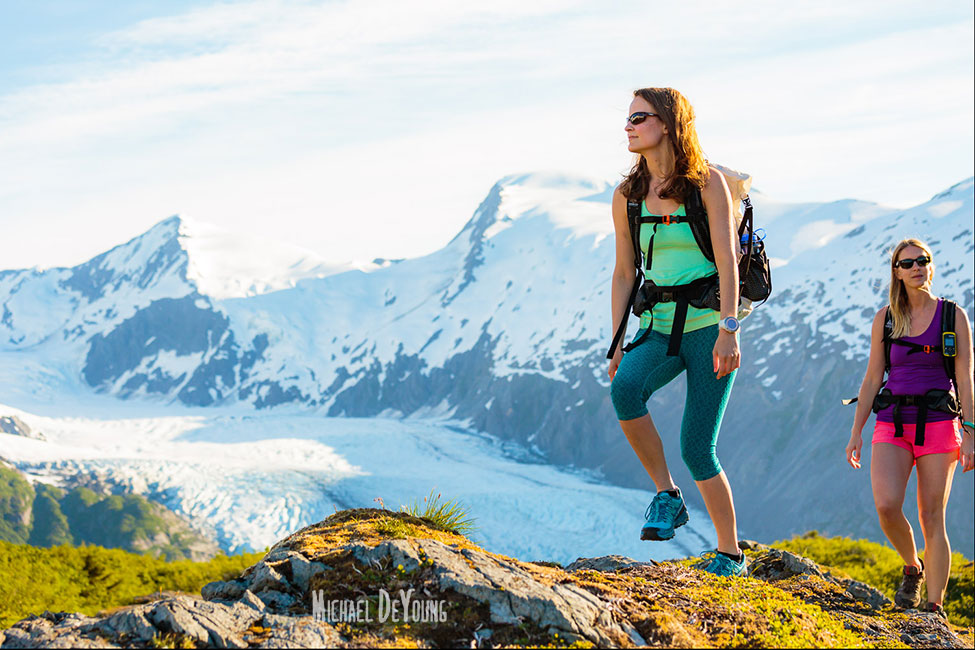 A short but steep trail brings you to stunning sweeping views of Portage Glacier. This location is only a 40-minute, (900 foot gain), hike from the trailhead. When shooting in backlight and showing facial features Michael almost always overexpose from what the camera meter reads for more pleasing and brighter skin tones. Exposure was 1/250th of a second at F/5.6 and was 2/3 stop brighter than what the camera suggested. Camera: Canon 5DMarkIII, Canon 70-200F/4 L IS lens, hand held.