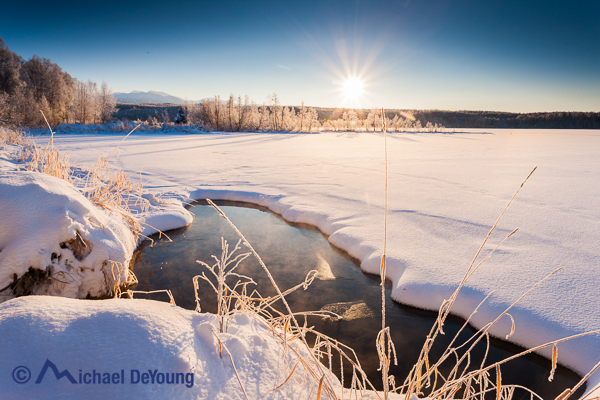 Only 3 days from the winter solstice I was on assignment shooting environmental portraits of 2012 Iditarod Champion Dallas Seavey near his kennels near Willow. With the sun reaching only 5 degrees above the horizon at mid-day I was lucky to be nearby a lake where the trees were far enough away to give us some beautiful open sunlight. This time of year that meant about 3 hours of unobstructed sun. This far north, clear skies in the dead of winter mean only one thing: cold. This was a short trip (only 4 full days) and luckily the weather held for another day giving me a chance to spend an afternoon shooting winter landscapes around Anchorage. It was good to get re-acquainted with the Alaska winter landscape. 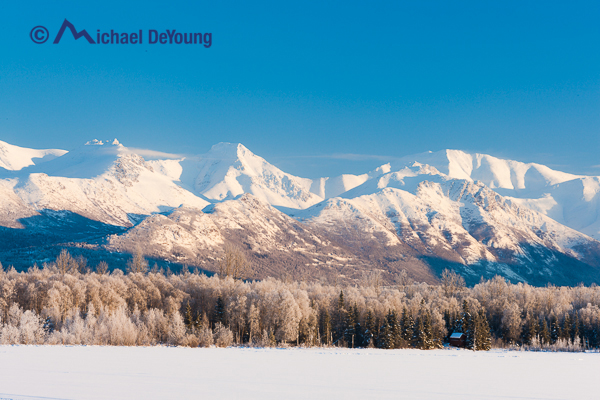 My main concern was the cold. It was -22F (-30C) in Willow that morning and this time of year the daily temperature range is usually 10 degrees or less.  We started shooting about 12:30 and it had warmed very little.  Being on a lake, a low spot where cold air pools, it was -15F (-25C) max.

Canon Wireless Speedlights: This shoot was the first time I would use the Canon 600EX-RT speedlights fired wirelessly with the new ST-E3 transmitter in extreme temperatures. Knowing that alkaline and my rechargeable nickel metal hydride batteries would die quickly in this cold, the speedlights, the external power packs, and the transmitter were all outfitted with lithium AA batteries which have the best cold weather performance. 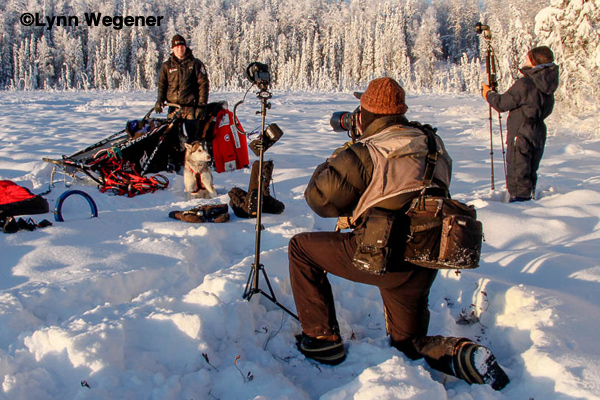 The lighting plan was simple. Use the beautiful sub-arctic sun as sidelight and backlight, and fill the shadows with the speedlights. The RT wireless system worked flawlessly in the bright light and cold for about two hours when the recycle time started getting over 20 seconds. I love being able to control the ratio and mode (Manual or ETTL) from the transmitter though I still had to take my hands out of my gloves to make the changes. In these temperatures, I got about 150 shots before the recycle time became intolerable. Luckily the shoot was winding down.

SpinLight360: This was also the first shoot that I’ve used the new SpinLight 360 Extreme light mod system in these temperatures. I was concerned with the plastic becoming brittle and breaking during my typical hard use of my strobes. This system is mainly targeted for wedding and event shooters but I have really taken a liking to this system. Once the base unit spin ring was attached to the flash with Velcro ,which is very secure, the modifiers (dome, snoot, grid, bounce cards) were easy to attach in the cold with gloves on; a big plus in extreme conditions. I used a the diffuser dome, the grid and snoot and I am really impressed with the quality of light from these mods as well as their light weight and ease in attaching and removing various mods. 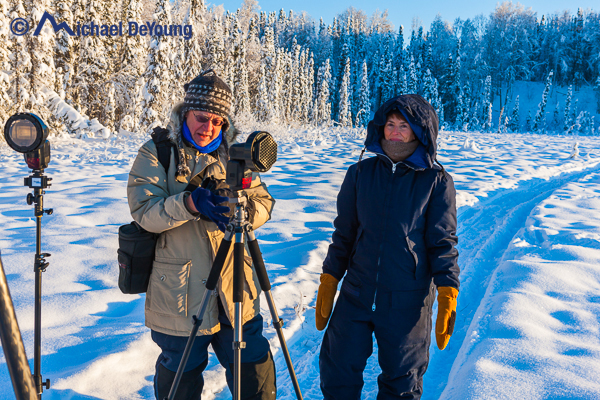 Near sunset, with the temp dropping I wanted to get a shot with Dallas and two of his dogs hooked up in front of his sled. I set up my 2 speedlights with snoots with the group B:A ratio of about 3:1. Group B, operated by my assistant Lynn, lit Dallas’s face. Since this was a wide angle shot Lynn had to maintain a fair distance and thus the snoot worked better than a grid by not reducing the light output as much. I aimed group A on a separate stand at Hero and Porter, also champion athletes in the foreground. The snoots did a very good job at focusing the light on the dogs and keeping unwanted light off the snow. 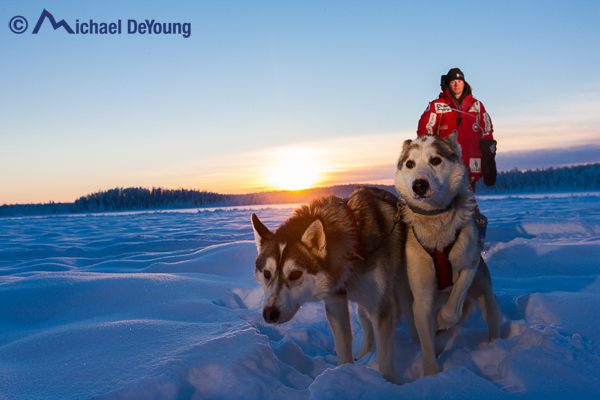 I also got to spend an afternoon shooting landscapes around Anchorage where I had a mix of sun and fog. The image of Otter Lake shows the mid day sun at how low it stays in the sky. From the same vantage point is a side-lit shot of the Chugach. An hour later near sunset I found this scene –  the frozen birch forest and peaks behind Ship Creek and Arctic Valley – diffused by the lingering freezing fog and stratus. 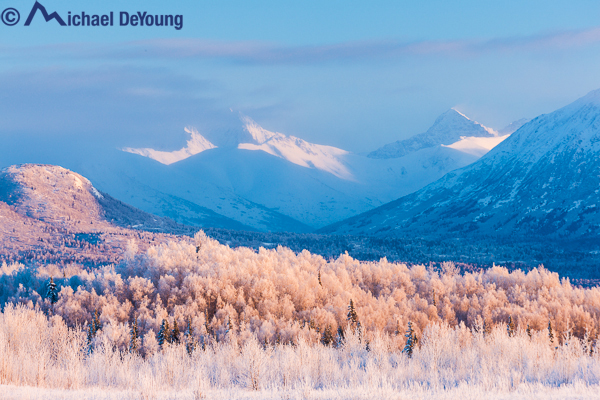 This short trip reminded me of just how nice winter landscape photography can be in mainland Alaska. Here is the shot I missed: Mt. McKinley, Hunter and Foraker glowing in warm light with beautifully lit snow-covered forest near Willow in the Susitna Valley. I didn’t stop because we were running a little late for our shoot and the client was more important than a landscape. But it was probably near the best I’ve seen of a winter view of the south side of McKinley and the Alaska Range.