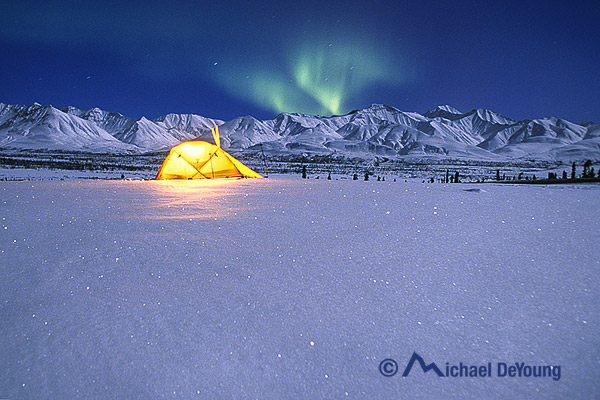 Photographing on and in Snow.  Snow and ice environments have obvious challenges like staying warm, keeping gear dry and out of the snow and getting firm footing under your tripod in deep snow.  However, in terms of quality and quantity of light nothing is better to me than a fresh snowy environment.  Snow is nature’s best reflector and the easiest environment to work with natural light in.  Even on flat terrain the snow becomes a light source beneath your subject and provides some fill regardless of whether your subject is a skier or moose.  Forest photography, especially in dark spruce or pines is virtually impossible on clear snowless days.  Cover the ground and better yet the trees with fresh white and magic happens. 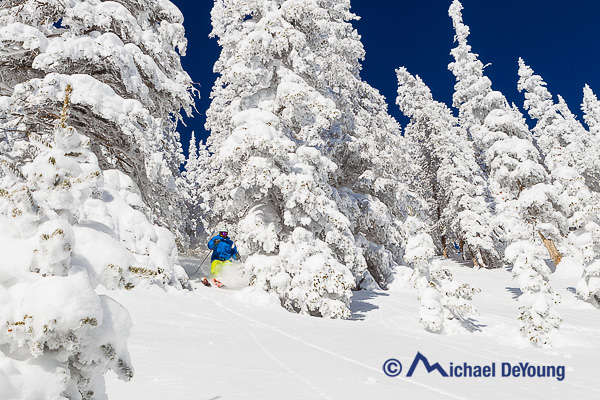 Matt sking through Twin Trees at Taos Ski Valley, New Mexico. A similar scenario without snow cover would not have been within dynamic range to make a good image. 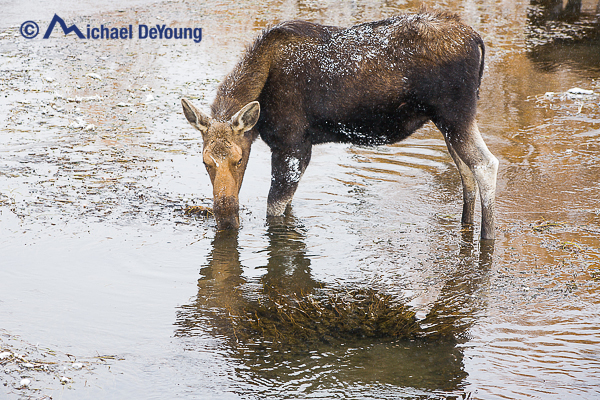 Cow moose feeding in the Teton River near Jackson, Wyoming. Light snowfall added some nice contrast to the dark fur of the moose

Even on cloudy days in a snow covered mountain environment I can shoot action at decent shutter speeds and aperture.  This shot of a skier jumping in overcast skies was shot at 1000 at f8 at ISO 200.  The same cloud cover at this same location on a snowless green/brown landscape might yield only a third of the exposure I got here. 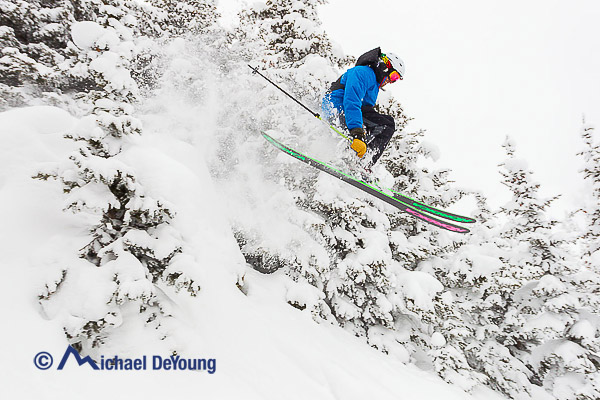 Jimmy jumping off of Two-Bucks, Taos Ski Valley. It was an overcast day but because of the fresh snow enough light gathered to give a 1/1000 shutter at F8

Not much geek speak on the atmospheric dynamics of snow this blog.  It would create a far too complex and long blog.  Forecast models are better today than when I was actively forecasting at predicting snowfall amounts but there is still a fair degree of uncertainty particularly in the moisture starved west with highly variable elevations.  The ratio between snowfall and its liquid water equivalent is highly variable.  A quarter inch of water may only produce 2.5 inches (10:1 ratio) of wet snow at a location that is only marginally cold enough to support accumulating snow.  That same location after being sub-freezing for a long time and under different upper air dynamics can get 5 inches (20:1) of dry snow from the same quarter inch of precipitable water. 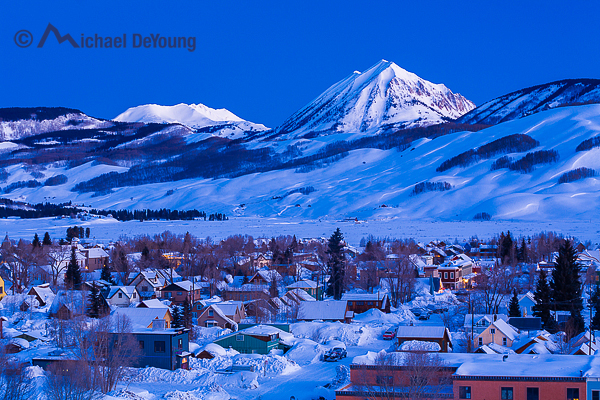 View of Crested Butte and Gothic Mountain at dusk on a heavy snow winter. Cold interior and high elevation locations are known for dry powder snow. They often get 20:1 or higher snow to water equivalent ratios.

Snowfall is determined by available moisture, cold air and lift.  The mechanical lifting of air caused by fronts and upper level lows and short waves can be enhanced by orographic lift which is air forced to rise by terrain.  Many winter systems will bring in ocean moisture and transport it (advection) over inland regions where mountain ranges wring most of it out.  Some systems develop inland (like Alberta clippers) and don’t transport ocean moisture.  They work with moisture that is already in place over the region it is moving over which can be limited.   Interior moisture sources like the Great Lakes can produce local enhanced bands of “lake effect” snow. 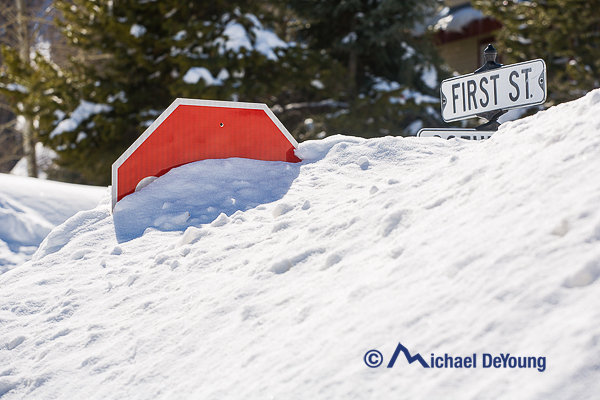 The Great Lakes is not the only place where lake effect takes place.  The western slopes of the Wasatch Mountains east of Salt Lake City regularly get enhanced snowfalls from North Pacific fronts because of lake effect off the Great Salt Lake AND orographic lift from winds with a westerly component flowing off the lake and forced up by the terrain.  There is a reason why some of the best skiing is located here.

“Lake effect” is not limited to lakes.  The coastal mountains of Alaska receive copious amounts of ocean moisture enhanced by strong orographic lift that overruns the high elevation and high latitude cold air that clings to these mountains.  This is why the coastal mountains from Prince William Sound to Glacier Bay in the panhandle became most glaciated mountains on earth in modern geological time. 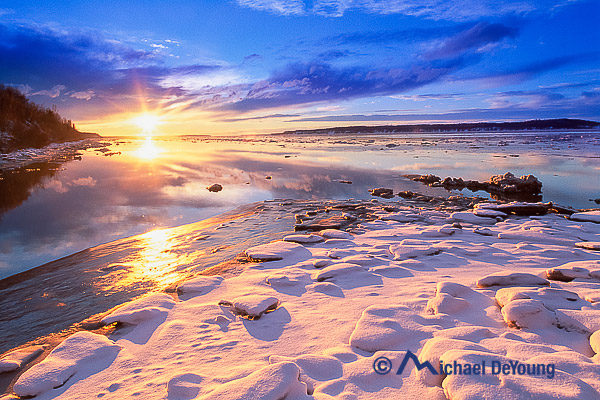 Exposure:   Snow, especially fresh snow, is the easiest background to expose for.  I was always perplexed in the film days over how many photographers struggled with exposures in snow and consistently came out with dark snow images.  My exposure for snow is simple:  I usually meter the brightest snow and open up 1 and 2/3 stops.  If you are shooting RAW you can tweak your exposures during processing and adjust how much you open up based on your taste and camera’s bias.  Digital cameras today are better at matrix metering but they can still underexpose snow scenes.  In aperture priority mode, I usually set my exposure compensation to +2/3 to +1 stop.  Done.  Shoot. 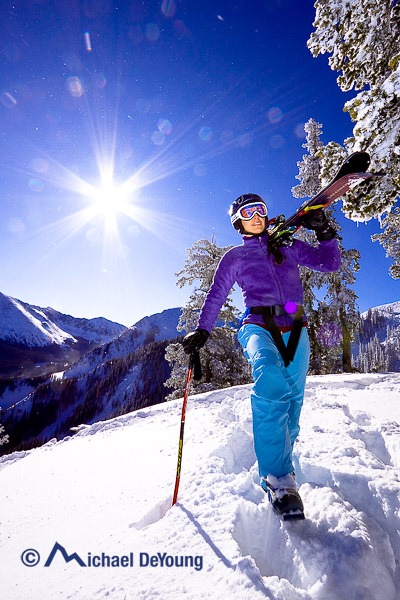 Backlight:   Snowy landscapes make it fun and possible to shoot into the light even making the sun part of your composition.  I always look for a sloped hill or mountainside opposite of the sun.  Then I can shoot into the light and have decent fill without resorting to strobes.  On this action ski shot at Taos I didn’t have a nearby hill for decent fill and the sunlight was basically parallel to the slope of the Mainstreet off of Kachina Peak.  So there was another reason, other than it looking cool for having my skier kick up some snow when she got close to me.  I knew it would create a reflector bringing additional fill light to hit her face.  (This technique also works with paddlers in foaming whitewater.) 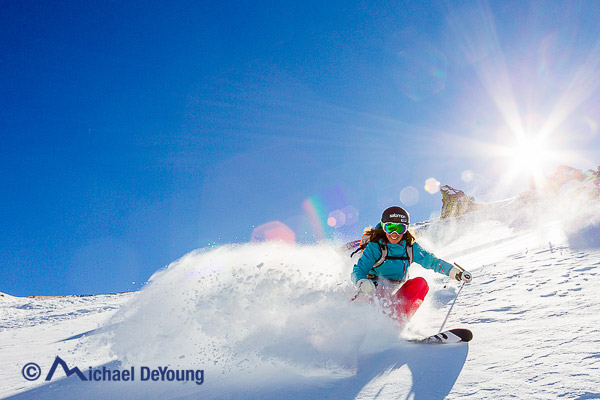 Andrea skiing off of Kachina Peak, Taos Ski Valley, New Mexico. Having her kick up snow created fill light to add detail to her face. 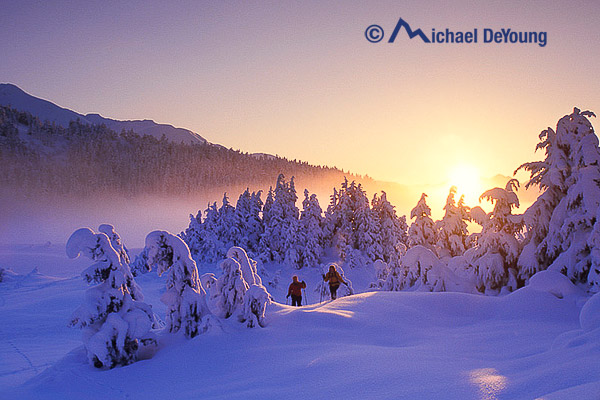 Snowshoers at sunset, Turnagain Pass, Alaska. Snow takes on the color of what is above it. Purple/pink alpenglow of the sky reflects in the shadowed snow and contrasts the warmly lit snow of the setting sun

While it is Snowing:  Billions of snowflakes in the air below cloud cover means maximum scattering and diffusion of light.  While this is not good for panoramic landscapes, this softbox effect, similar to fog, is great for portraits. 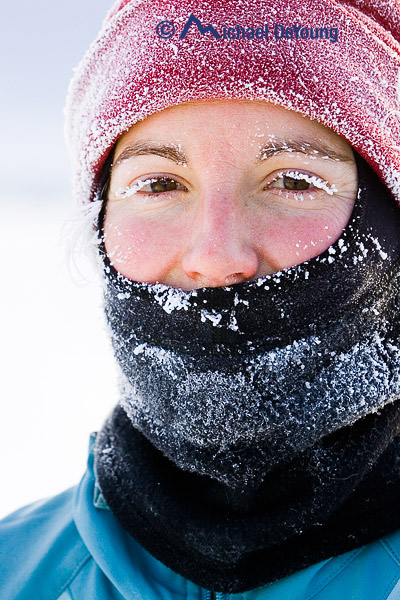 Portrait of runner with frosted face on a snowy morning in Idaho.

When the snow is flying, break out the telephoto.  Long focal length compression really enhances falling snow visually.  Better yet, look for a dark background like dark trees or even water.  I almost NEVER use flash when snow is falling because you risk having blown out snowflakes in front of your subject. 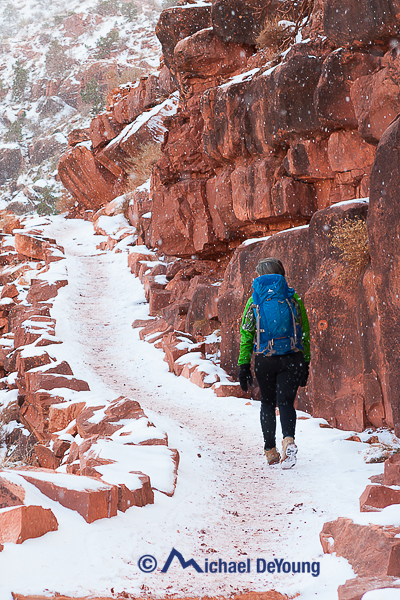 Using Speedlights on Snow.    Sometimes, action and portraits on the snow will benefit from the use of a speedlight.   The light could be flat, the sun below the horizon or your setting lacks a big bank of snow opposite of the natural light source to use as fill.  The key to using strobes in the snow is to absolutely keep stray light off the snow and focused on your subject.  Blown out foreground snow is very distracting, amateurish and usually indicates direct on camera flash use – a big no-no for snow.  I use grids and snoots (my favorite is the Spinlight 360 system) to control and focus the light on my subject and keep it off the snow.  In most instances, it takes a little trial and error and tweaking to get your light right when dealing with snow especially when using more than one off camera strobe. 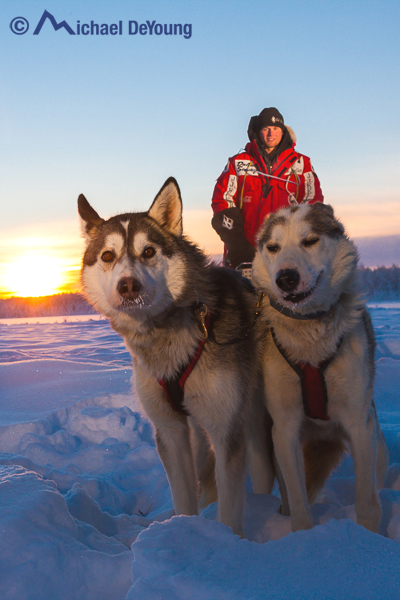 Dog musher and sled dogs at sunset. 2 speedlights with warming gels and shoots were used to separate the dogs and musher from the shadowed snow, near Willow Alaska 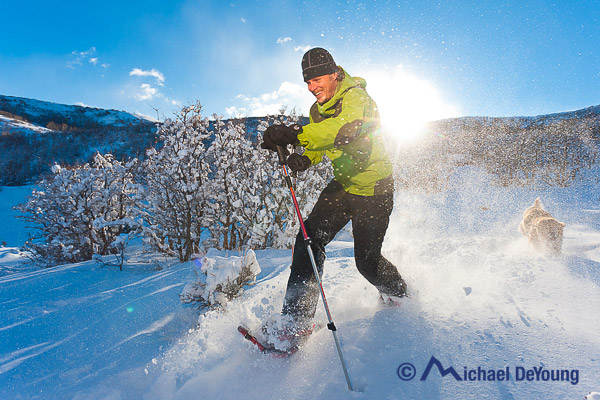 Brandon out for a snowshoe/jog near Park City, Utah. Strobe was used to add detail to the subject 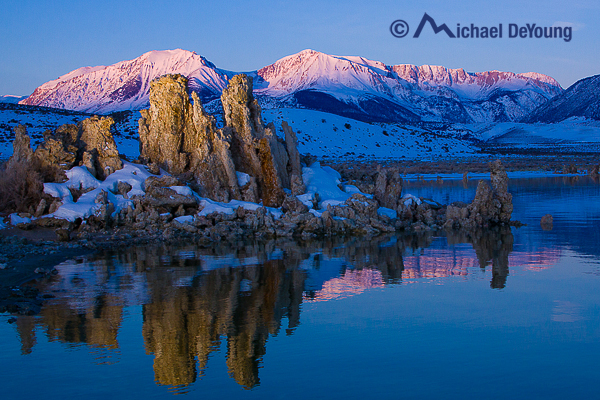 Mono Lake and the Eastern Sierra on a winter dawn. A strobe with a warm gel was used to light the foreground rock and aimed to match the direction of the first light hitting the peaks

Snow, Color and Depth.  Snow, like liquid water, can take on the color cast of what is above it.  Use this to your advantage.   Colorful skies at sunrise and sunsets can create beautiful reflective pastel colors on the snow.   The warm colors of this Utah sunset reflected both in the snowy slope and in the backlit flying snow behind the snowshoer. 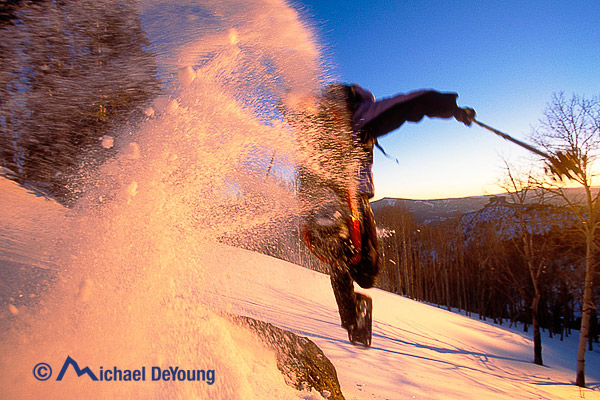 A snowshoer jumps at sunset up on Cedar Mountain, southern Utah

Shadowed snow tends to go really blue and you can use this to your advantage by using a warmed strobe or a warmed reflector to make your subject really pop from the background as seen in this wolf portrait and of the musher image in the speed light section. 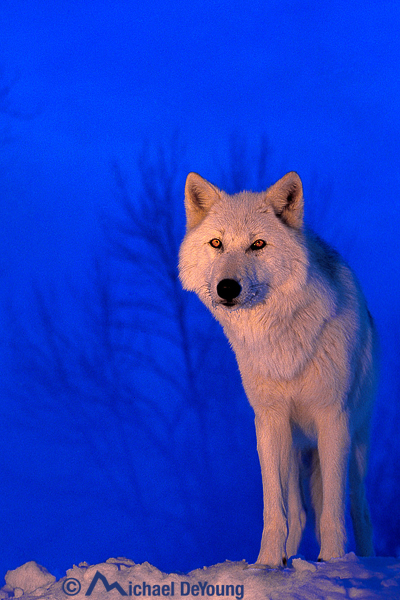 Portrait of a wolf in winter – Montana.

Environments with partial snow cover can also enhance a sense of depth and distance. 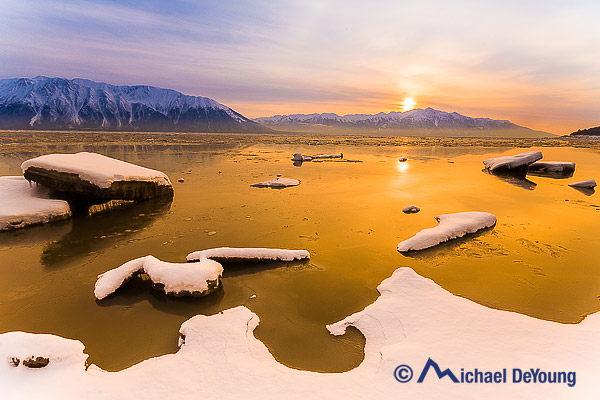