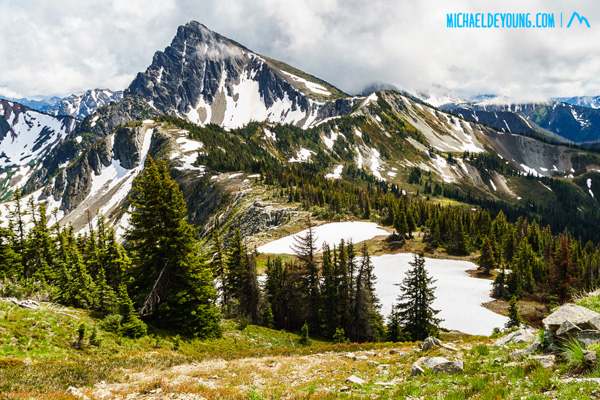 Three Fools Peak – You can see the trail cutting across the slope in the distance. Taken with Sony a6300 and Zeiss 16-70mm f4

I finally got started on July 7 at about 2pm. I made it to Manning Park, BC around noon on Saturday, July 9. I did 9 miles the first day, 20 on Friday and 8 on Saturday. What surprised me most about my start was operating in a constant hypothermic environment. It might have finally hit 50F in Manning yesterday when the sun came out. My feet got wet within 2 hours of starting and remained wet the rest of the time. I pushed hard on Friday, mainly to stay warm as it rained hard. I got about two 15 minute breaks Friday afternoon in the weather to make some images and set up camp just inside B.C. before it poured all night.

The plan was to return to Harts Pass yesterday and resume southbound but the rain caused a mudslide and closed the road to Harts Pass. No official word as of this writing if it is passable. It looks like more wet and cold through Tuesday. Summer will come eventually.

This is my second trip to the North Cascades. They are just stunning along the PCT. These mountains are big and steep and verdant green. It was a bit frustrating to pass by fields of wildflowers in the alpine in rain and fog. I had to camp in the trees both nights because of weather conditions and the mosquitoes are almost as bad here as I’ve seen in Denali or the Yukon tundra. 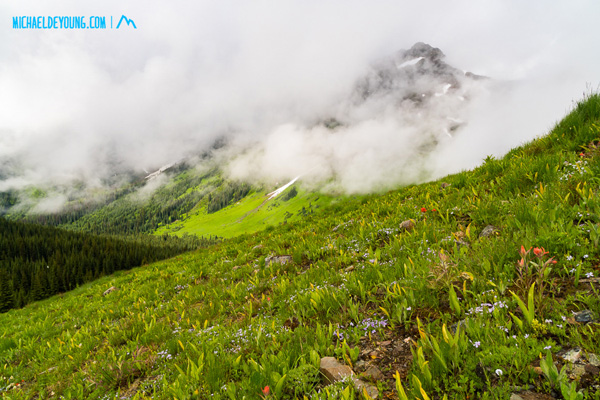 South side of Rock Pass in the fog

I camped alone and spent 99% of my time alone, seeing nobody. I chatted with most of the hikers I met who were all going south. Nobody chatted long as everyone I met understandably didn’t want to stop too long due to the cold.

I met 12 other SOBO thru hikers who all went up to tag the monument, including 5 solo young women, 2 young guys, a solo guy from Scotland, a father and son and only one couple. The last 2 guys I met at Hopkins Pass about 6 miles from the border. They said I was at the “Tail End” of a wave of SOBO’s who went up to tag the monument. Up until that time, the consensus among friends for a possible trail name was F-Stop. After all it is written right on my camera chest pack. But Tail End seems to describe my position in the SOBO pack, the old guy with the big pack in the rear. Another SOBO might see me if they take three consecutive zeros otherwise, NOBOs might be the only other PCT thru hikers I see.

I love sharing info with other hikers, but I have to take advice with a grain of salt. One guy said he had trouble finding the trail in places because of cross trails. I never pulled out my map. The trail was no problem to find. Others talked about the treacherous snow crossings and one person had to self arrest. The snow crossings, especially the north side of Rock Pass, looked more intimidating than they were. I used my axe for a margin of security there, but the actual crossing of the snow fields was pretty easy. I used the axe to glissade more than as an anchor. The Kahtoola micro-spikes were all but worthless in the wet snow and I will leave those behind.- 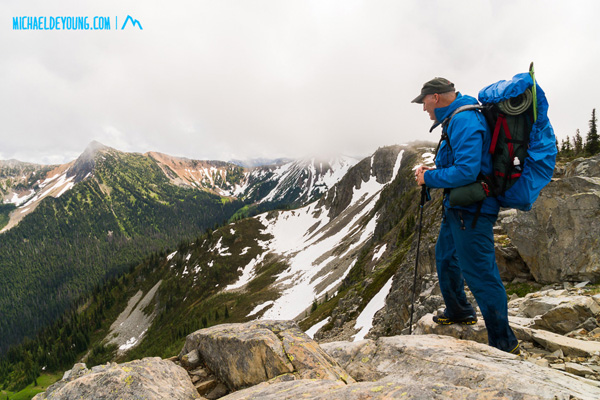 My legs and lungs are strong. But I am not ready for a 20 mile/day everyday pace. My feet are hurting. No blisters. I rarely get those. But my plantar flared up again even though I’ve been doing some of the exercises prescribed by my PT. It has been pretty good up until yesterday where I may have overdone it on that 20 mile haul which included hiking over, under, and around large fallen trees. 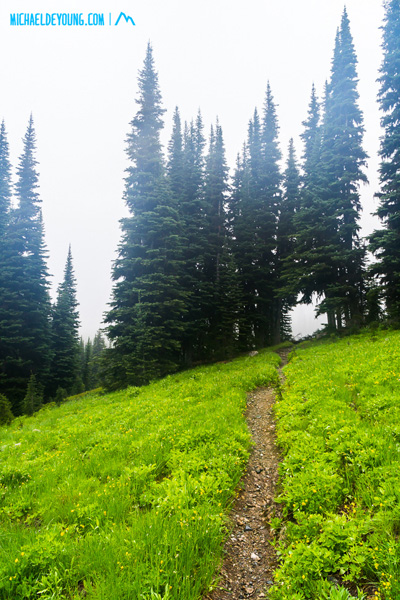 On the first benign snow patch I busted a carbon fiber Black Diamond Z-pole. No more $160 a pair poles. They are light but no stronger than aluminum. They also serve as my tent pole so breaking them both could make it challenging.

Hopefully I can get back on the trail at Harts Pass today weather and road permitting. Some may think I’m a wuss for taking a zero because of more rain. But remember, photography is equally important to me and passing through this stunning alpine trail shroud in yuck is frustrating. I want to get some decent landscape images! 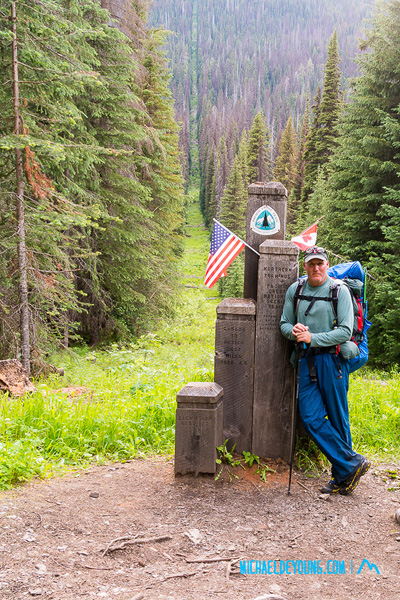 Self portrait at the Monument