Until recently, I’ve never been a big fan of fisheye lenses.  They look cool for an occasional shot where the distortion really adds to the visual interest of the image.  My first test with Sigma’s 15mm f2.8 fisheye for Canon was on a ski shoot at Taos Ski Valley close to home in northern New Mexico. The lens is solidly made and has a nice feel to it.  It is easy to focus and has a decent hyperfocal scale on the focus ring.  I’m not too concerned about its focus speed  because with a super wide lens I use hyperfocal manual focus anyway.  I used this lens on my Canon 1D, Mark IV.  With a 1.3x  sensor the 15mm fisheye became just short of a 20mm on this camera and it didn’t produce the full fisheye distortion.

For ski action work at close range to my subject, I set the focus to a little beyond 4 feet and everything from about 3 feet to infinity is in focus at f8.   This lens produces a beautiful diffraction star when shooting into the sun.  In fact it is better than my Canon EF 20/f2.8.  Shooting at 1/1000 second at f8 produced very sharp and contrasty images.  There is noticeable chromatic aberration but it was easy to correct with a simple checkbox in Lightroom 4.  In most instances, I actually preferred the distortion.  This lens has a profile built in to Lightroom 4 and correcting for distortion is as easy as checking a box.  The 2 images below show the uncorrected image on top and the same image corrected for distortion beneath it. The corrected one chops too much off the corners but it makes the skier look taller and Lauri likes that! 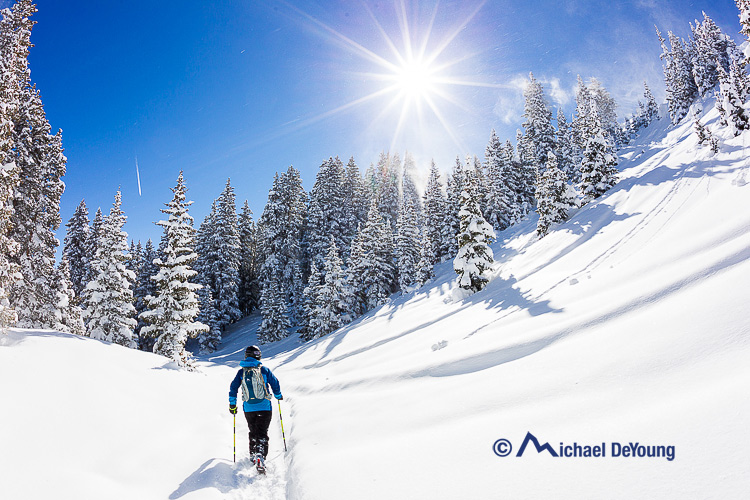 Lauri skiing across a rare flat section at Taos Ski Valley off of Highline Ridge. Shot with a Sigma 15mm/f2.8 fisheye. This shot shows some fisheye distortion. The shot below was corrected for lens distortion in the built in profiles in Lightroom 4.

Lauri skiing across a rare flat section at Taos Ski Valley off of Highline Ridge. Shot with a Sigma 15mm/f2.8 fisheye. Distortion correction was applied in RAW processing in Lightroom 4.

All in all this is a great lens especially for shooting into the sun with lots of depth of field, contrast and sharpness.  I know fisheyes are popular for landscape photography but I can see using this lens just as much for unique sports action shooting too.  Definitely a worthwhile pro lens. 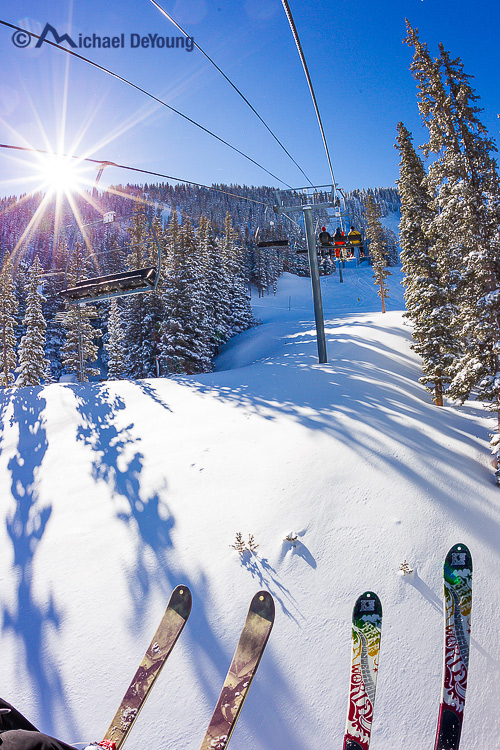 Lauri and I riding up chair 2 at Taos Ski Valley with the morning sun cresting the ridge. Shot with Canon 1D Mark IV with Sigma 15mm/f2.8 fisheye.