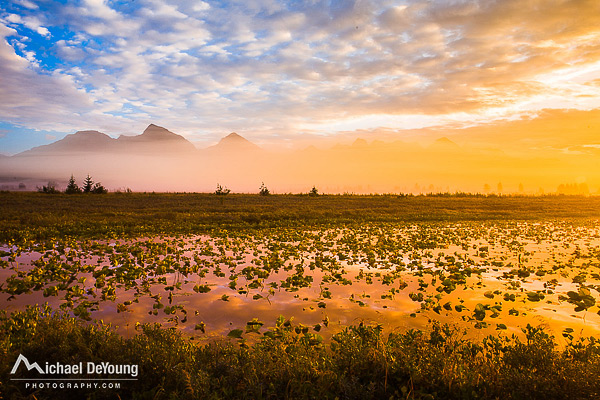 Photographing Fog.  Don’t get bummed out if you wake up to dense fog with cold flat light.  If no precipitation is falling chances are that magic light and golden photo ops are close by.  The keywords with fog are:  live on the edge and get high.  (Hopefully, this last phrase will make sense after reading this blog.)  There are two parts to this blog.  The first is the long-winded Geek Speak on fog.  The second part is tips and advice for photographing fog. 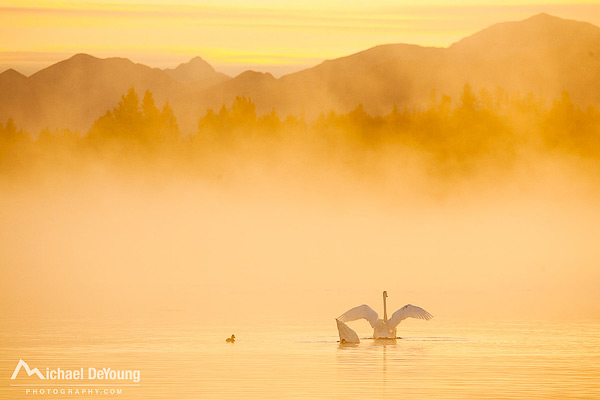 Meteorological Geek Speak on Fog.   Fog is a ground based cloud and along with its sister cloud, stratus, which is off the ground but very low, is ALWAYS trapped below a temperature inversion.   Fog can and does form during and after widespread precipitation events with precipitation falling from thicker clouds above such as nimbostratus.  But many times fog forms as a very shallow layer under clear skies.  It is under these conditions that fog can create great light and photo ops.  Fog and stratus not associated with precipitation are stable atmosphere clouds that form under high pressure.  Pacific high pressure during winter is the main culprit for fog in western North America.  Sometimes fog can be really thick vertically especially when there is an “upslope” wind flow into a mountain range.  In fact when fog/stratus reaches about 2000 feet in depth it produces drizzle, freezing drizzle or snow grains. 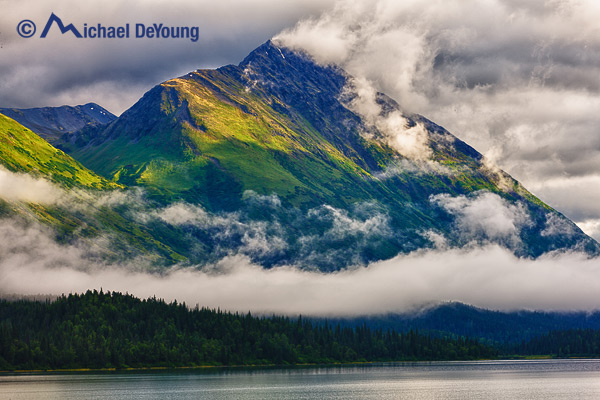 Stratus clouds cling to the shores of Upper Trail Lakes on the Kenai Peninsula. These clouds were the result of widespread and prolonged rain. Image made in a clearing storm scenario.

There are 3 types of fog: radiation, advection and ice fog.  Radiation fog is the most common type and occurs everywhere even in deserts.   Radiation fog forms when the sky is mostly clear but a shallow layer of air at the surface is very moist.  Cooling at night brings the air to close to saturation (close to the dewpoint temperature) and traps the shallow moisture under a temperature inversion.  A very light wind  (2-5mph) at or just above the surface mixes it up and presto, fog forms.  Let’s say it rained all day, the ground is soaked, and skies clear toward sunset with very light winds.  This is a good prescription for morning radiation fog.  In winter, radiation fog gets trapped in many western valleys for weeks. 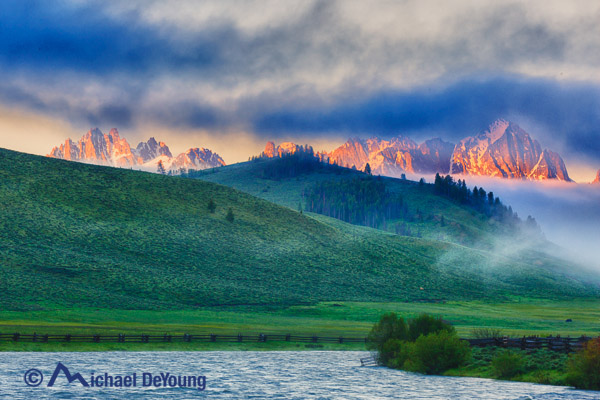 Our coastal friends often get advection fog.  This is when fog over the water is drawn inland.  When you breathe on a cold window and it “fogs” up you are essentially creating advection fog.  This same mechanism happens on a large scale, when moist, relatively warm ocean air moves over a colder landmass. In the Cook Inlet region of Alaska, low tides exposes massive amounts of super cooled moisture in mudflats which is the principle cause of winter fog in Anchorage.  On the North Slope, open leads of ocean water called polynyas are the source of dense fog and even precipitation.

During summer air simply flowing from warmer water to colder waters can cause advection fog and this is a common occurrence off the west and northern coasts.   Mountainous coastal areas are subject to a double whammy of advection and radiation fogs that are often enhanced by orographic lift, where low level winds flow into higher terrain where air is forced to rise and condense.

When fog forms in winter at well below freezing temperatures it is referred to as freezing fog.  This is a natural phenomenon and is often mistaken for ice fog.  Water droplets can be “super-cooled” meaning they are liquid but below 32 degrees.  When moisture in the fog/stratus contacts very cold surfaces (roads, trees, anything) it will cause icing.  This causes the beautiful white cloaked forests after a fog event. 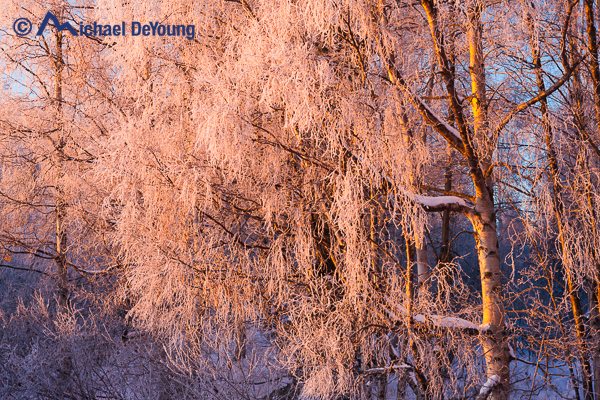 True ice fog is a purely man made phenomena.  It forms in arctic air at -22F or colder.  Air at those temperatures can hold almost no moisture, so very little can saturate an airmass.  In winter in interior valleys of mainland Alaska and northern Canada, under extreme inversions, ice fog forms in villages and settlements.  The minute amount of moisture that comes from exhaust from internal combustion engines and building furnaces is enough to create fog at extreme temperatures, say like -40 and colder.  Ice fog is often less than 100 vertically where you can see stars above but can restrict horizontal visibility to almost zero!

Tips and Advice for Photographing Fog.   No need to get bummed out if you wake up to a thick fog and cold flat light.  You now know that chances are you can get high or to the edge where the light can be magical.  Or it can change right were you are.  Fog usually dissipates from the edges inward so start your photos near the edge if possible.  Fog often lifts into stratus and the tops can become a ragged edge.   The edges of the sun or moon are sharp and clearly discernible when seen through fog/stratus.   If the sun/moon edges are diffused or hidden, then that indicates there are higher clouds above the fog/stratus layer.  Any yes, there are times when none of this works and the whole day is shroud in thick cold fog.  Being on the edge or top of fog with the sun above means the brightest fog possible and this is where the light is absolutely lovely.  Like snow, fog is bright, relative to terrestrial subjects even if it looks grey to the eye.  This means it can fool meters into rendering underexposure.  I mainly meter manually but if you prefer aperture priority go with about +2/3 exposure comp.  Fog both diffuses and scatters light making a beautiful wrapping soft light on close-up subjects.  I rarely use a filter or strobe in the fog.  The exception would be if I’m above it and shooting backlit, I might use a grad ND (neutral density). 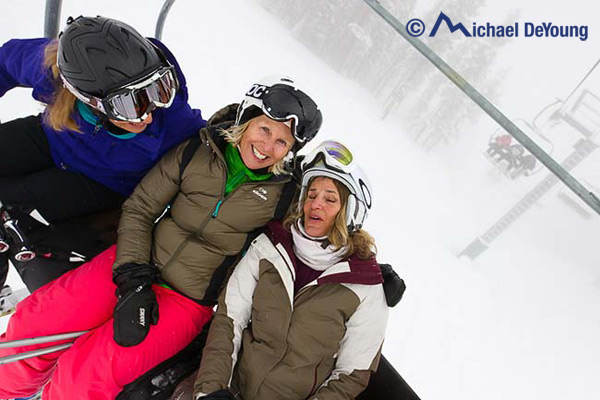 Portrait of skiers on Taos Ski Valley chairlift. Image made near the top of a fog bank. 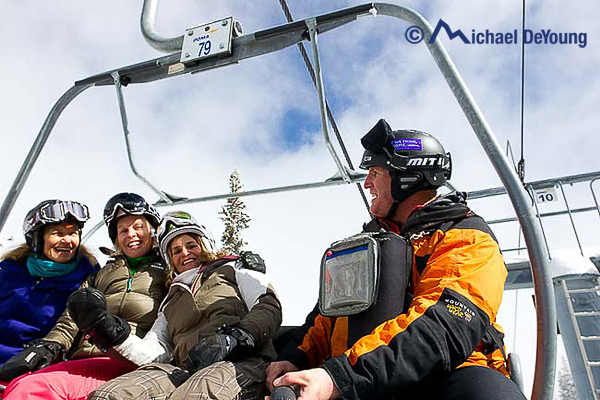 Michael DeYoung photographing skiers on Chair 4 at Taos Ski Valley. As we ascended above the fog into the sun, lighting became much harsher and unflattering than the shot in the fog below.

Here’s what I like to go after in fog.

Forest:  No better time for inside the forest photography than during a fog.  It helps exaggerate distances between near and far with close up subjects sharp and distant subjects fading into the mist.  The best scenario is when the sun shines through trees with lingering fog creating magical shafts of light in an alluvial fan pattern-pure magic.  Anyone who has been to the coastal redwood forests, or seen images from there, can attest to this. 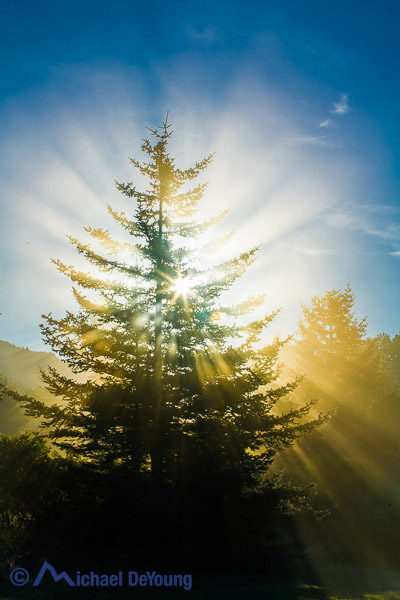 The last of marine fog scatters the morning sun through a Sitka spruce tree on Kodiak Island, Alaska 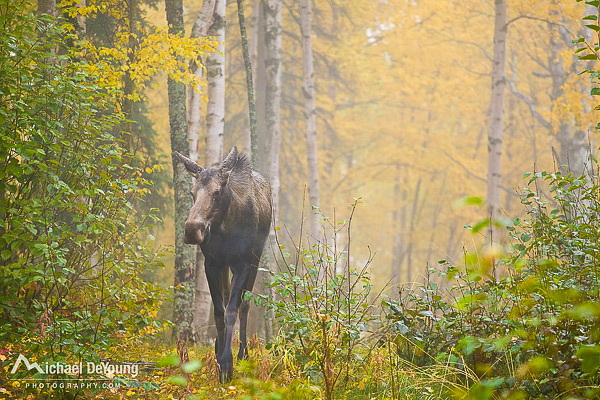 Anything macro:  great saturated colors and even tones and contrast.

Portraits:  No better natural beauty light than a bright fog and it can produce a better bokeh effect than any lens. 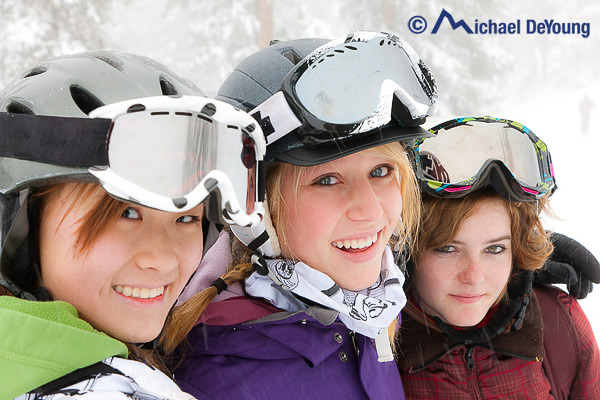 Landscapes with fog in the foreground:  This is when you are in the clear with a fog bank or stratus clouds all around you in the distance:  I love fog banks where mountain tops or tree tops rise above.  I think this effect makes mountains look taller.  Better yet if you can shoot it in backlight.  There have been several times when a fog bank has hidden buildings and power lines creating unique opportunities.   Fog also can create a horizonless landscape which is pretty ethereal. 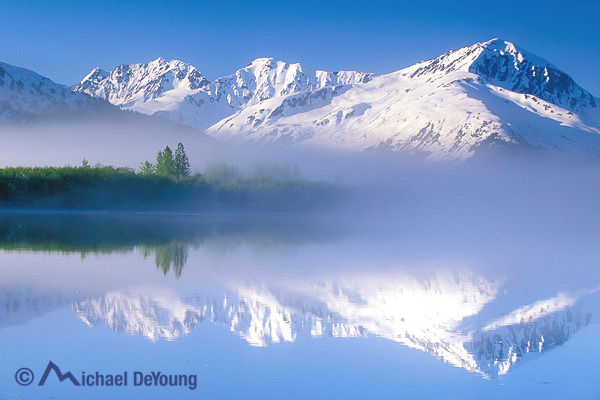 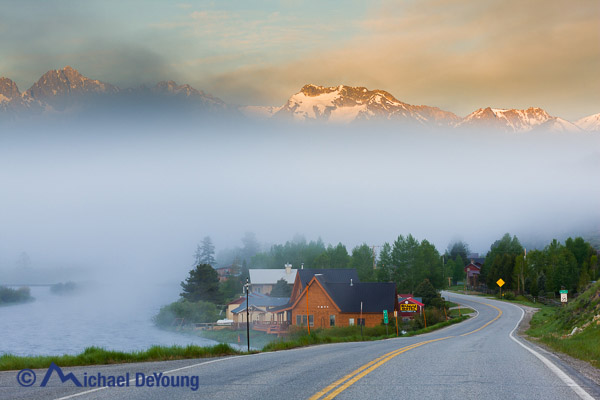 Radiational fog obscures the Salmon River and the town of Stanley below sunlit peaks of the Sawtooth Mountains, Idaho

Being above it all:  My very favorite place to be is at the edge of the fog assuming it is sunny above.  Obviously you have to live in an area that has some vertical relief if you want to get above it. One of my favorite images took place while hiking above the fog.  Near the end of an 8-day Kongakut River trip in Alaska’s Arctic National Wildlife Refuge, Lauri and I hiked above fog advancing south off the Arctic Coastal Plain.  We spent midnight at the edge of the foothills of the North Slope of the Brooks Range watching fog dance in and out of ridges and valleys as the warm midnight sun never set. 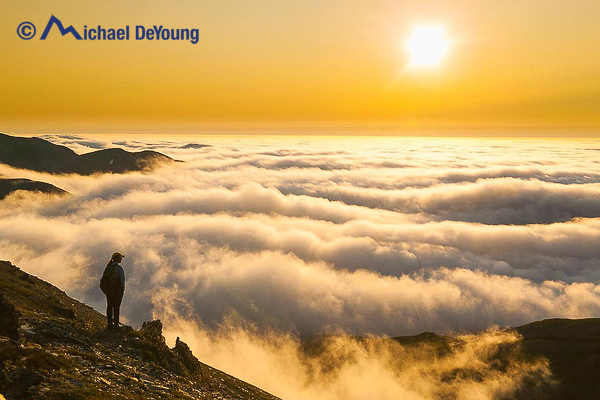 Most often for efficiency, I drive above it. On occasion, a ski resort chair lift has carried me above the fog.  I really love low angle sun skimming across tops of fog.  Shooting mountains with fog in valleys below can hide otherwise distracting elements and creates a heightened sense of well, height.  Being at or above the fog’s edge at sunrise or sunset – well it doesn’t get much better. 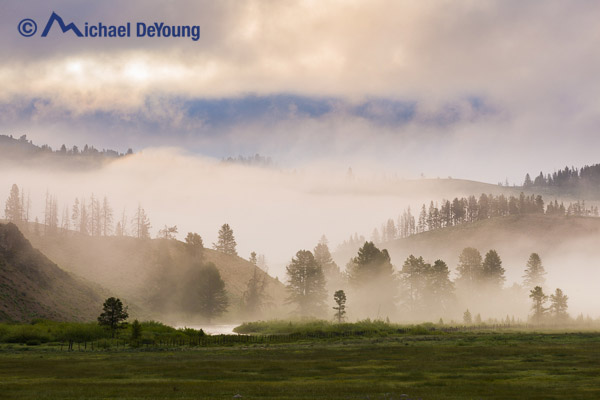 Radiational fog and stratus in early morning in the Upper Salmon River valley near Stanley, Idaho.