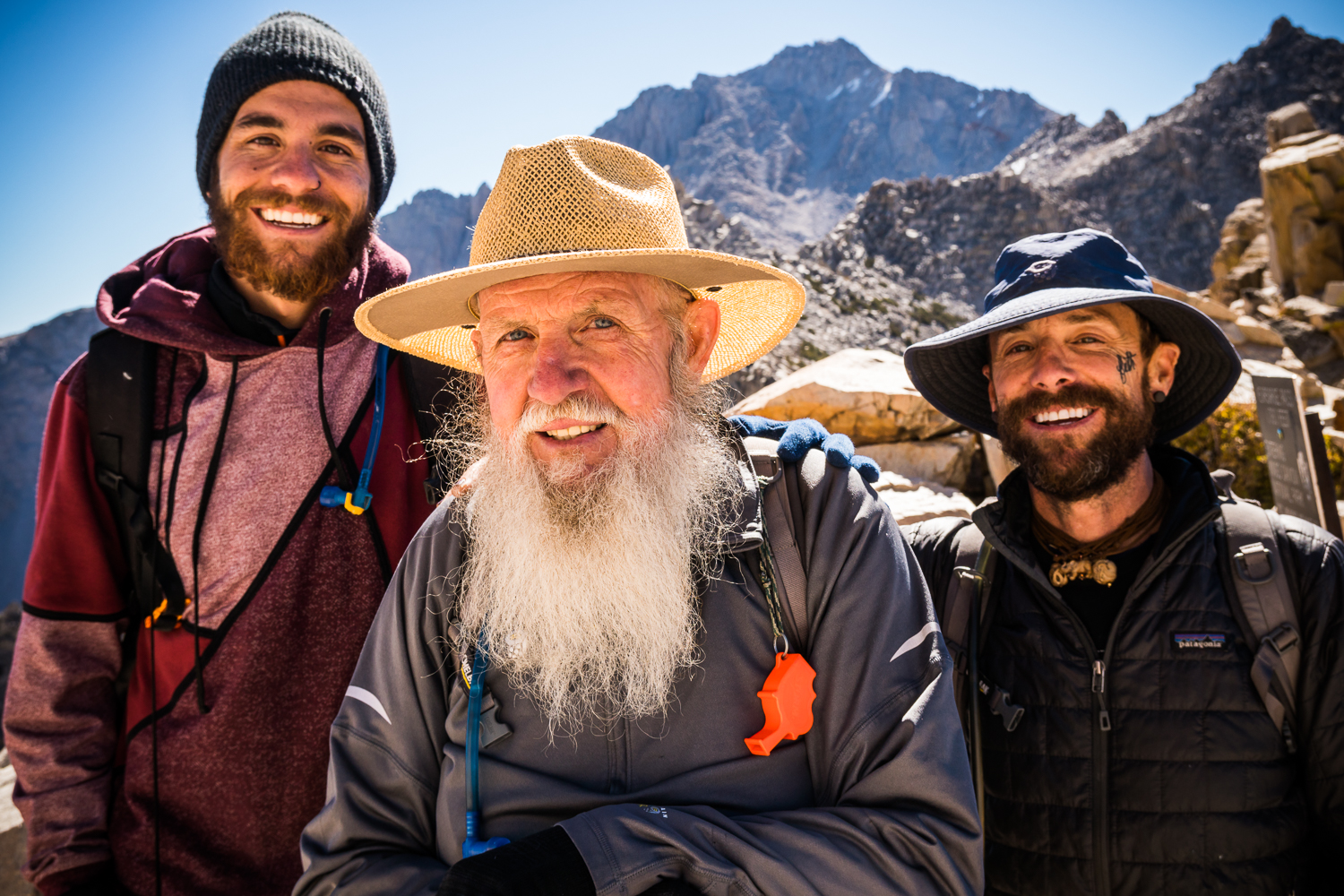 The Smith Boys, three generations of hikers from Tehachape, on Kearsarge Pass in the Sierra. We ran into them as we were returning to the PCT from our last resupply at Independence.

Here, finally, I am posting a collection of hiker portraits as personal photo project. Some of these images have already been published on previous posts from my PCT 2016 hike. I hiked the trail with a new camera, a Sony A6300 with a Zeiss 16-70F/4 lens, so I was learning the camera as I hiked and used it. As a way to learn the camera, as a chance to come out of my comfort zone as a photographer, and focus on a weakness, I set out to make portraits of select hikers I came across on the trail. 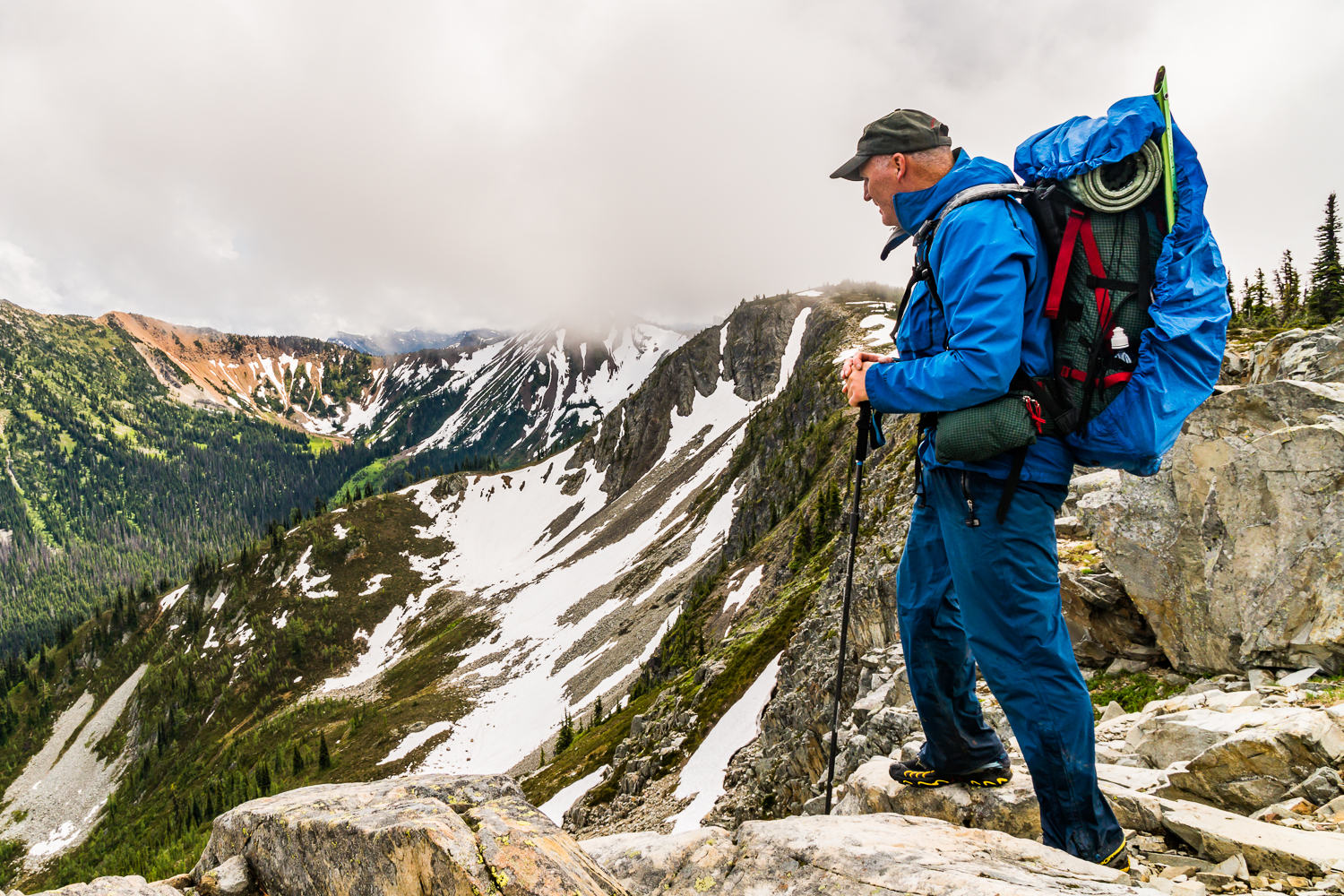 I did not take a tripod with me on my hike through Washington to save weight. I wanted to do something a little more dynamic as a self-portrait than the cliche “standing at Monument 78 at the border” shot, which I did anyway. Four miles from the border at Hopkins Pass I fiddled with the self timer mode and propped my camera on some rocks to make a few self portraits. The distant ridges in the background are Canada.

Don’t get me wrong. I also took plenty of images of other subjects within my normal area of expertise, like landscapes, hiking action and camp scenes. I did all my trail photography as a minimalist. I had no lighting. All I had was one camera and one lens. Sometimes I would run across hikers in the middle of a harsh sunny day and after a 5-minute conversation, try to make the best portrait image I could given the conditions. Other times I photographed hikers who became friends and hiking companions – most notably, the Frenchtastic Four. These were four millennials from France, all friends prior to hiking, doing this big adventure together in America. They were so awesome to hang out and hike with. 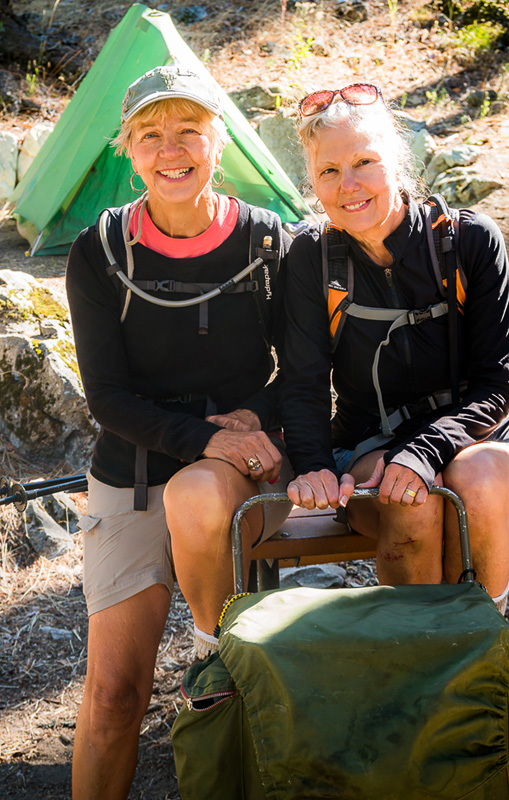 Nancy and Linda, two delightful women at the Stehekin, Washington Campground, who hiked in from Highway 20 at Rainy Pass. Linda, on the right, had a vintage rucksack – almost the exact pack I carried at Philmont Scout Ranch in 1976 except mine was burnt 70’s orange. They were camped next to me when I arrived and we talked for several hours.

My hope was that being in a wilderness environment and connecting with like-minded people would ease my apprehension of asking people to be photographed. It did help but I was surprised at how hard it was to overcome my extreme introverted persona even on the trail. I don’t feel these are earth shattering portraits by any means but I do feel like I’ve improved and that is a good feeling. Ironically, soon after we pulled off the trail, I was hired by a national client to make portraits, mostly sports portraits mixing natural with strobe lighting. Fortunately, they were pleased with the results. 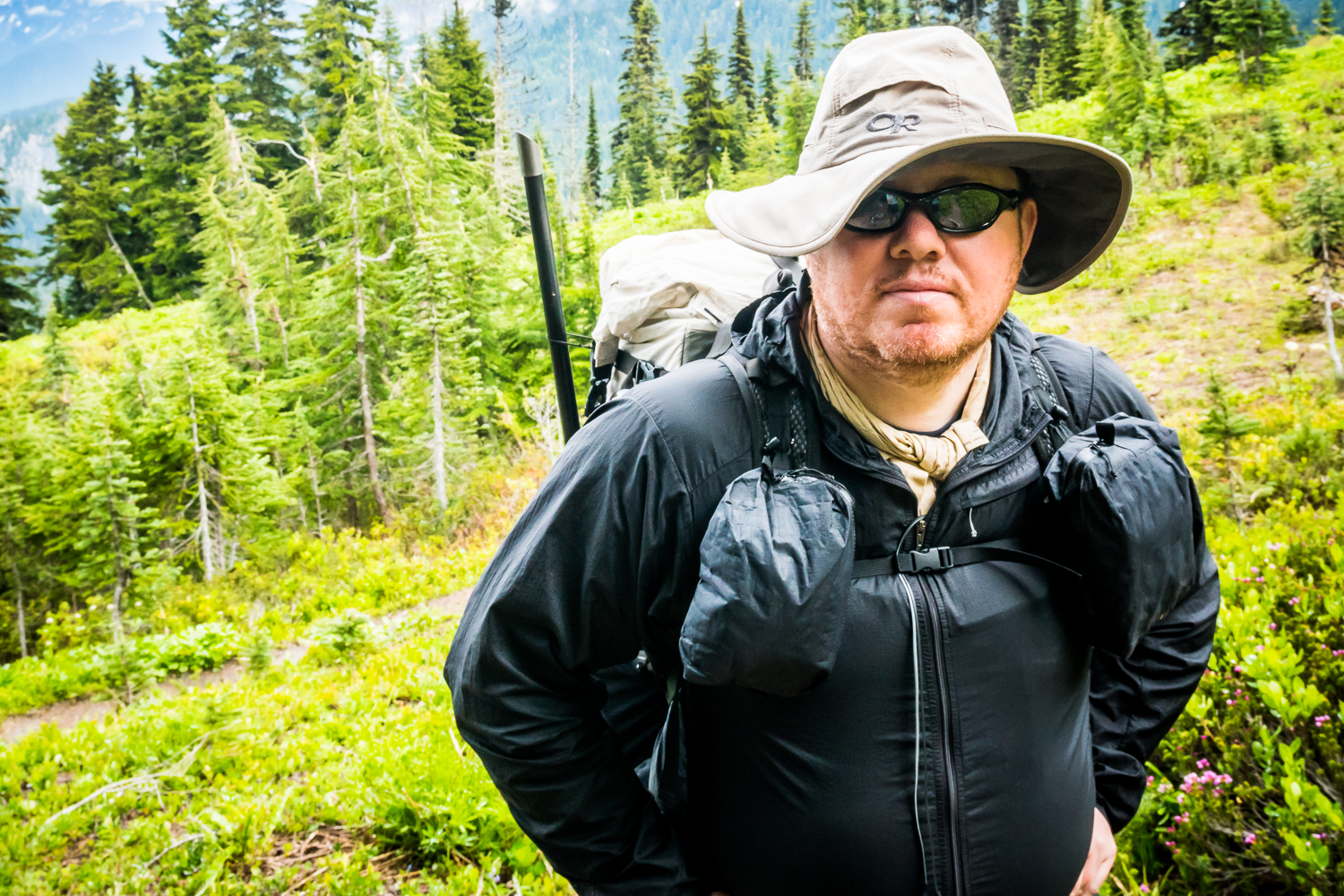 Zed (Liam) is a Scottish Southbound hiker. He is a seasoned world traveler, having worked as a nurse and hiked in Australia, Tasmania and Iraq. He was the first PCT hiker I met on the trail, on day one, 4 miles from Harts Pass. I was starting my northbound “tag the border” hike and he was returning from his border tagging and continuing south. I didn’t photograph him then as it was raining. We leapfrogged each other regularly in the northern half of Washington. I photographed him here in the Glacier Peaks Wilderness. A day or two after this meeting he dropped his very expensive carbon fiber ice axe on the trail. I picked it up and carried it for two days and got it back to him at Snoqualmie Pass. 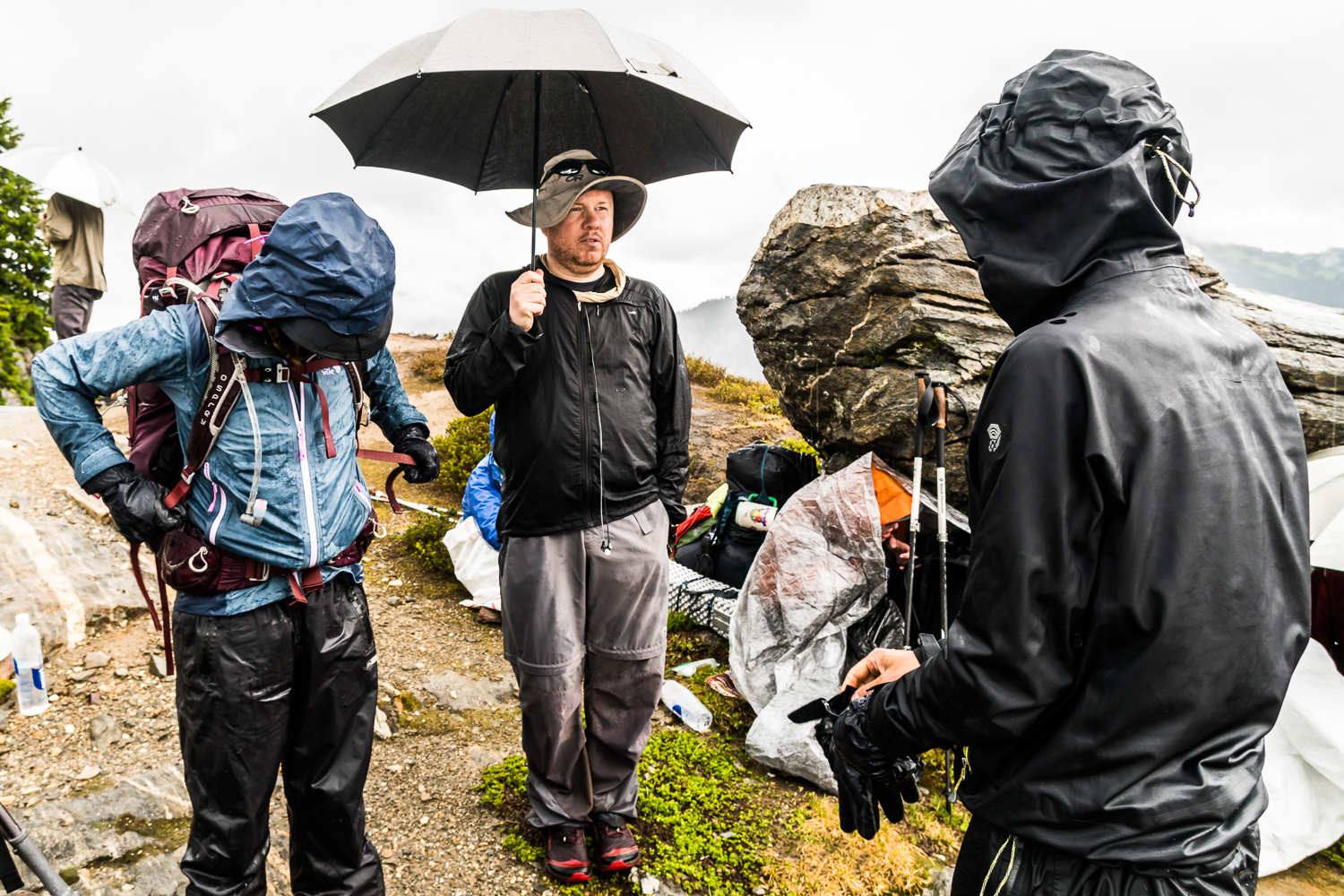 Gang of SOBOs in the rain and hail at Mica Lake, waiting for visibility to clear before heading up Fire Creek Pass. Sherry, Andrew and I went first despite the horrible weather. New hail and snow covered the trail and boot pack on the pass so we had to do a few minutes of GPS navigation to find the trail.

Lauri and I will be section hiking all of Washington this summer and I will continue with this project then. 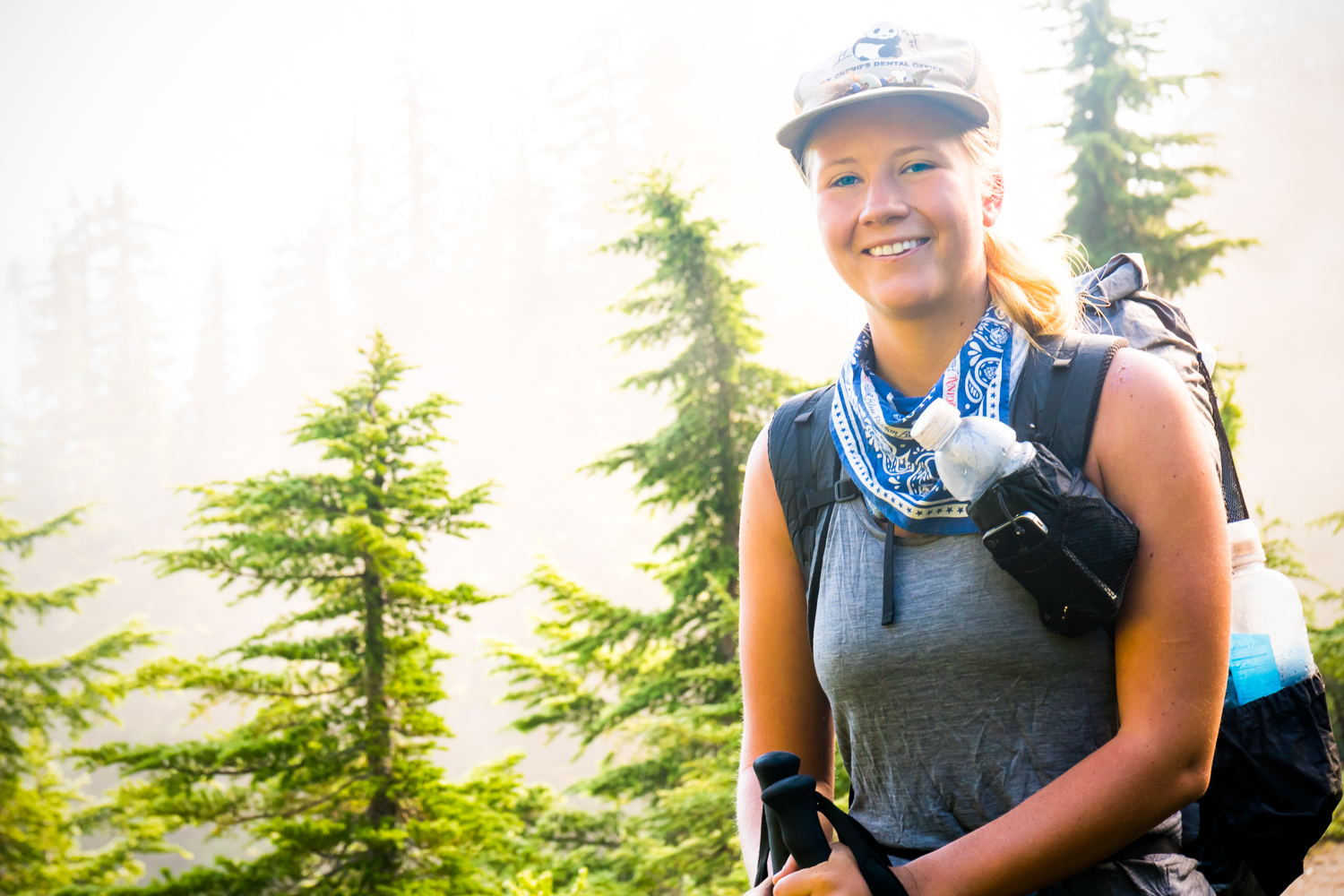 Northbound thru hiker, “Hummingbird” (Tela) in morning fog on summit of Grizzly Peak just outside the southern boundary of the Glacier Peak Wilderness. She was the first PCT thru hiker I photographed both in action and here as a portrait. She had done most of the trail northbound being stopped by fires. So she was section hiking Washington northbound. 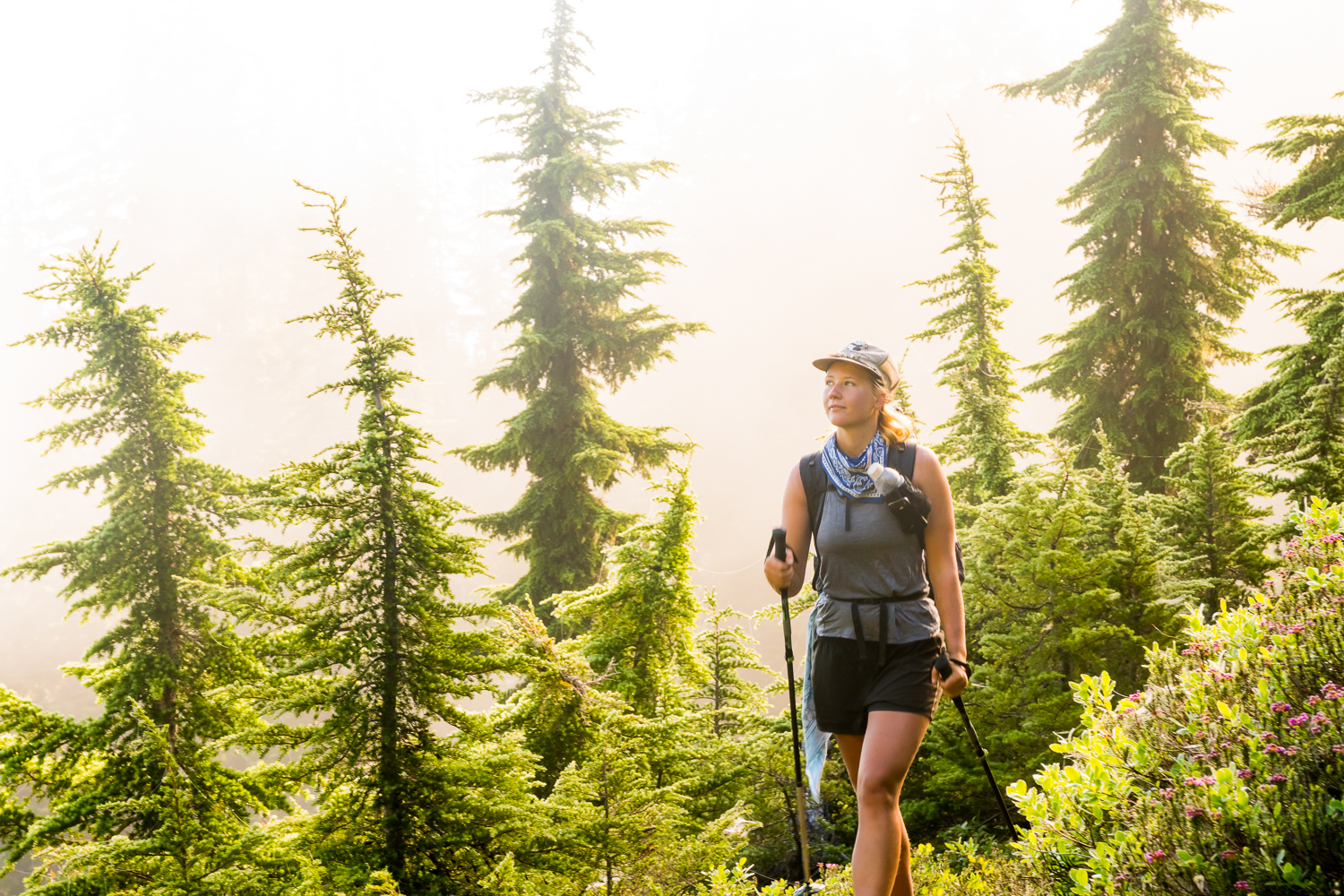 “Hummingbird” (Tela) in morning fog on summit of Grizzly Peak just outside the southern boundary of the Glacier Peak Wilderness. I wouldn’t classify this as a true portrait. It represents what I’m more comfortable with: action and environmental portraits. This was one of my most liked Instagram post from my PCT hike. 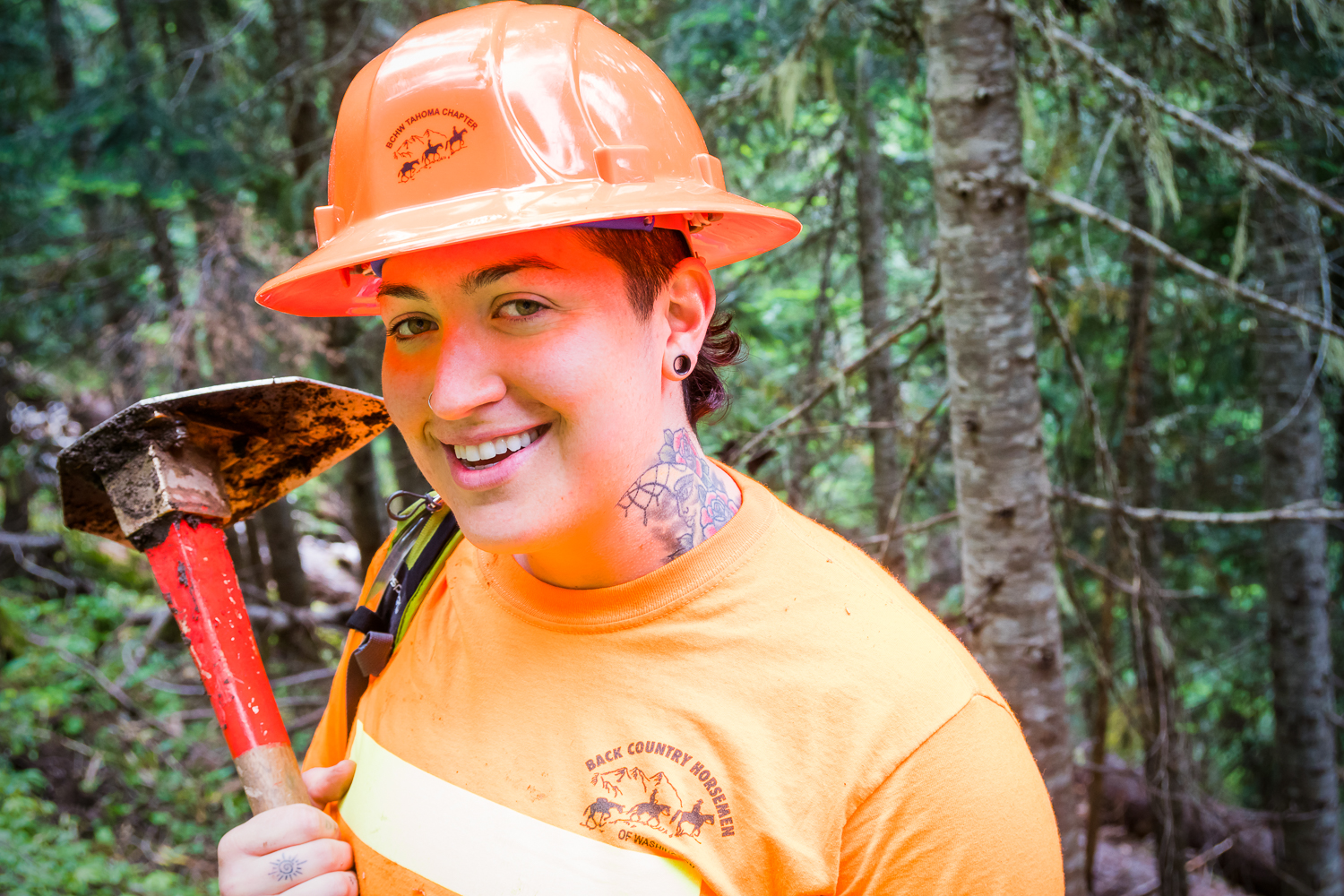 I never got her name but this is one of my favorite portraits of a hard working trail maintenance volunteer from 350 Blades, Washington Trail Assocciation and Pacific Crest Trail Assocciation working near Govermnent Meadow Camp and Mike Ulrich Cabin near northern border of Norse Peak Wilderness. I spent about 30 minutes talking to and then photographing several trail crew members. 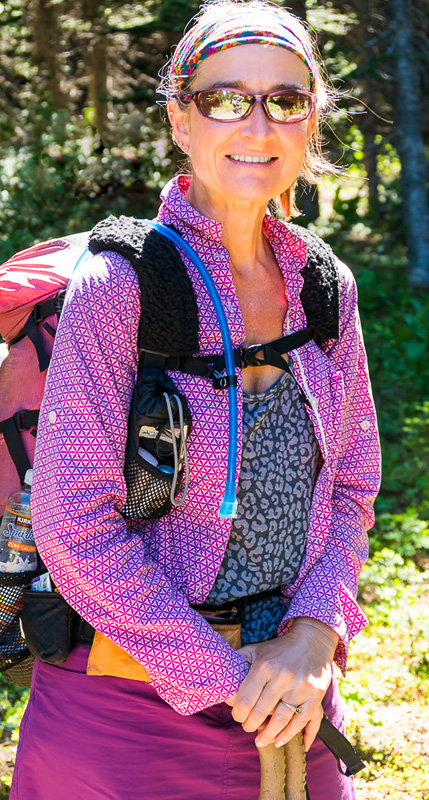 This is CC, Color Coordinated, from the Class of 2015 who successfully thru hiked in 2015 northbound. I met her in the Norse Peak Wilderness in Washington. She was section hiking Washington only, northbound, because the previous summer it rained during most of her hike. 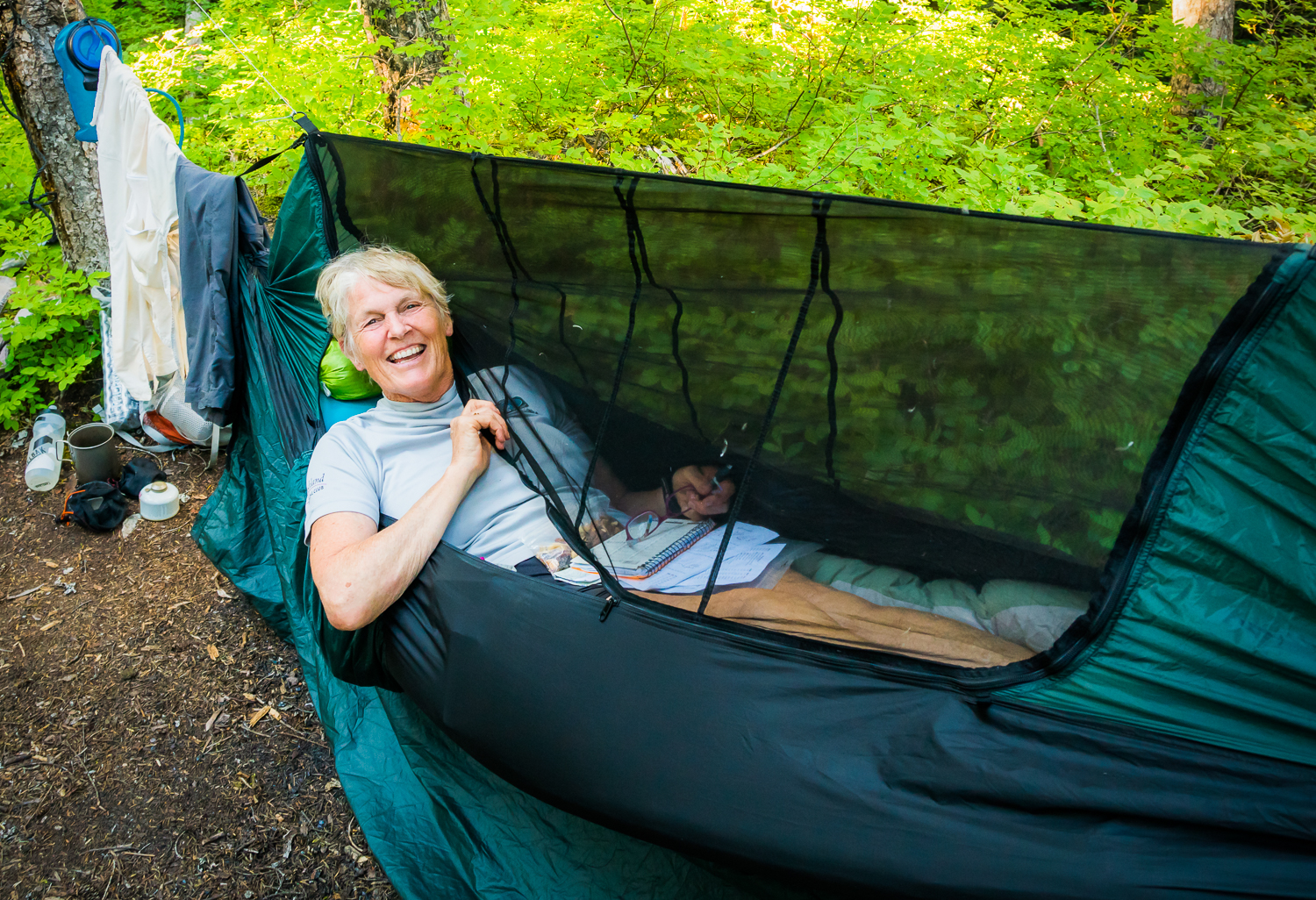 Section hiker, Dutchess, is a life coach and author. She teaches women over 50 how to backpack. Here she is in a hammock tent and camped where I stopped to have dinner nearby a stream. Her website is www.transformation-travel.com 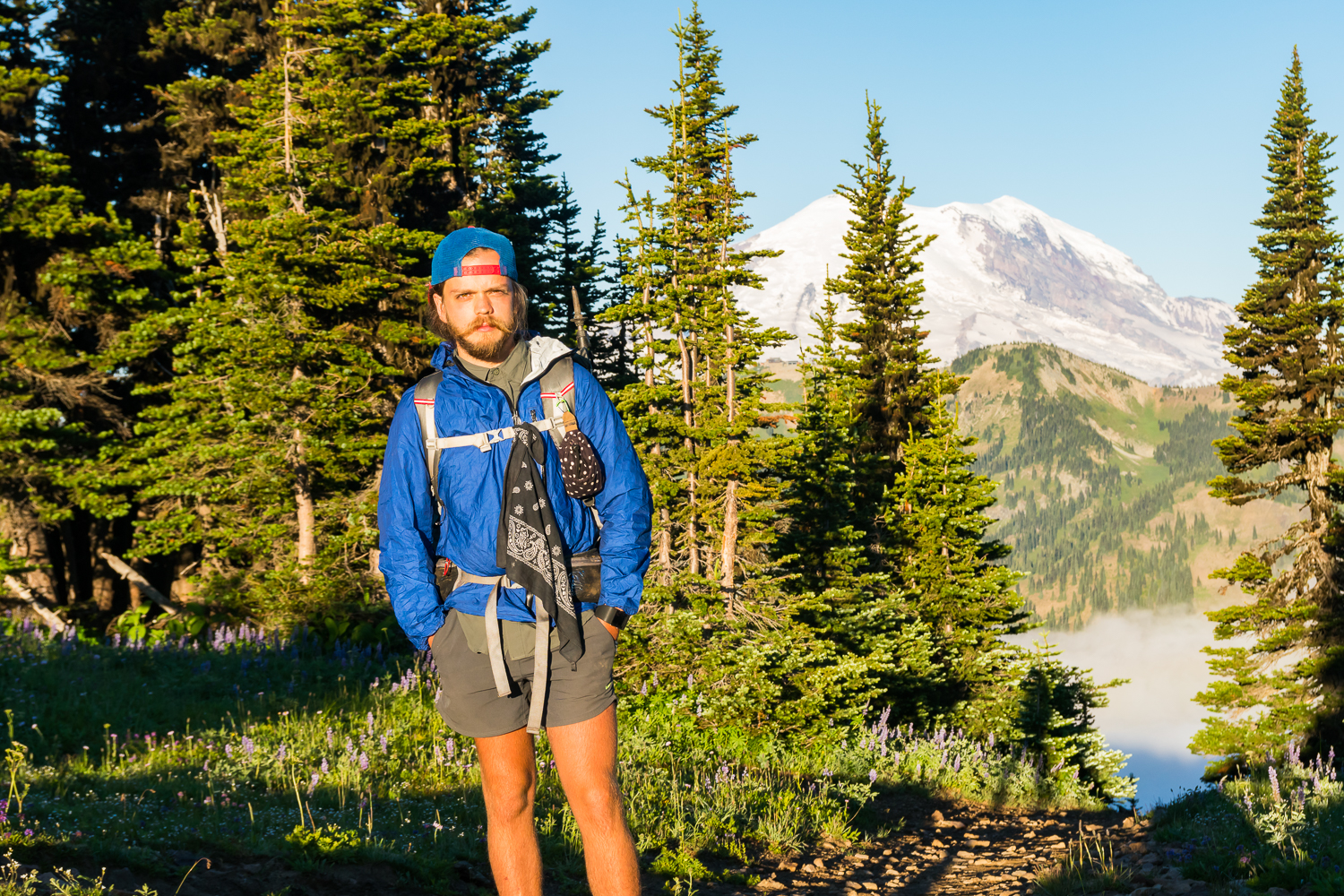 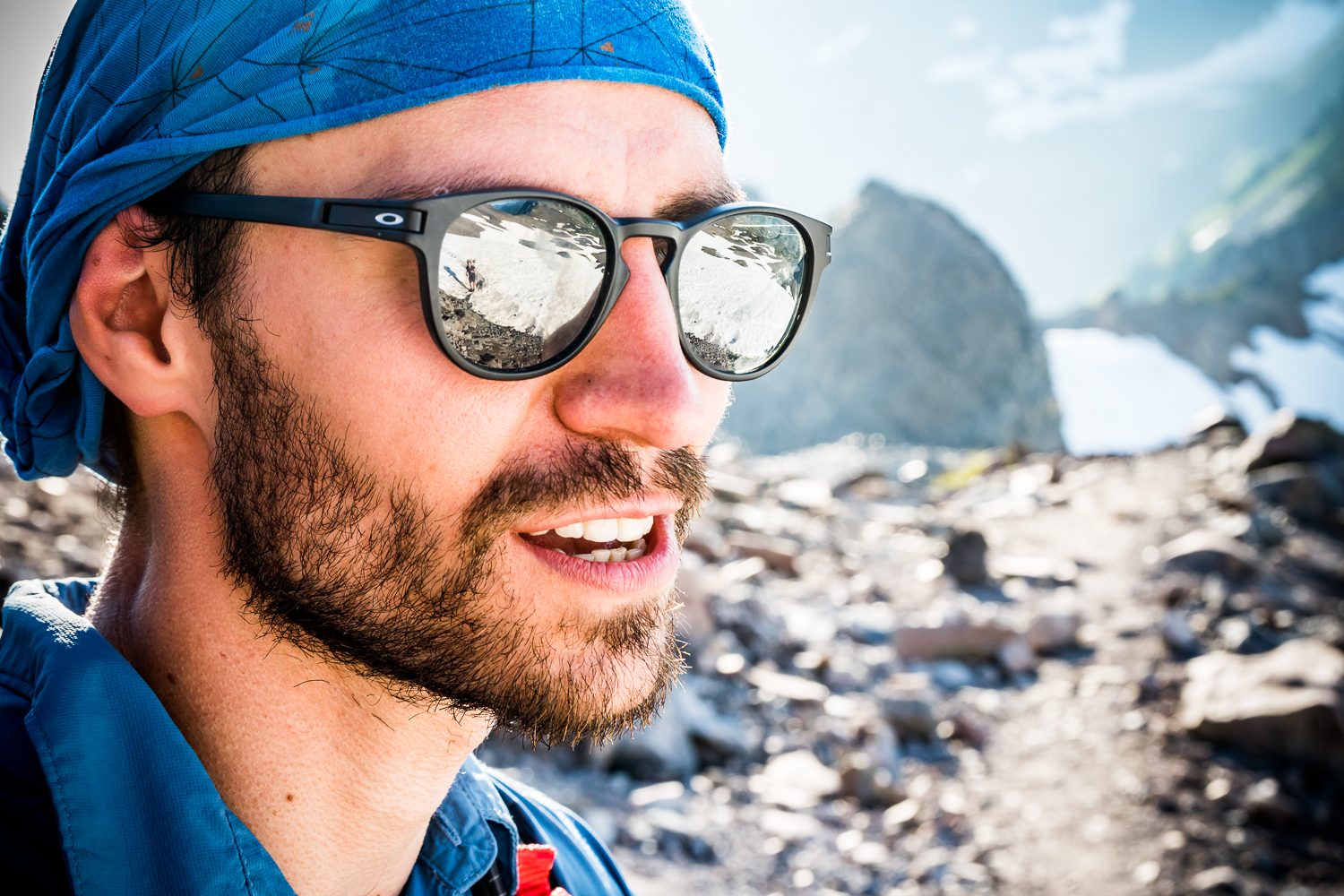 Thomas of the Frenchtastic Four, pauses along the Knife-edge in the Goat Rocks Wilderness as Juliette (seen in his right sunglasses lens) finishes crossing a snowfield. 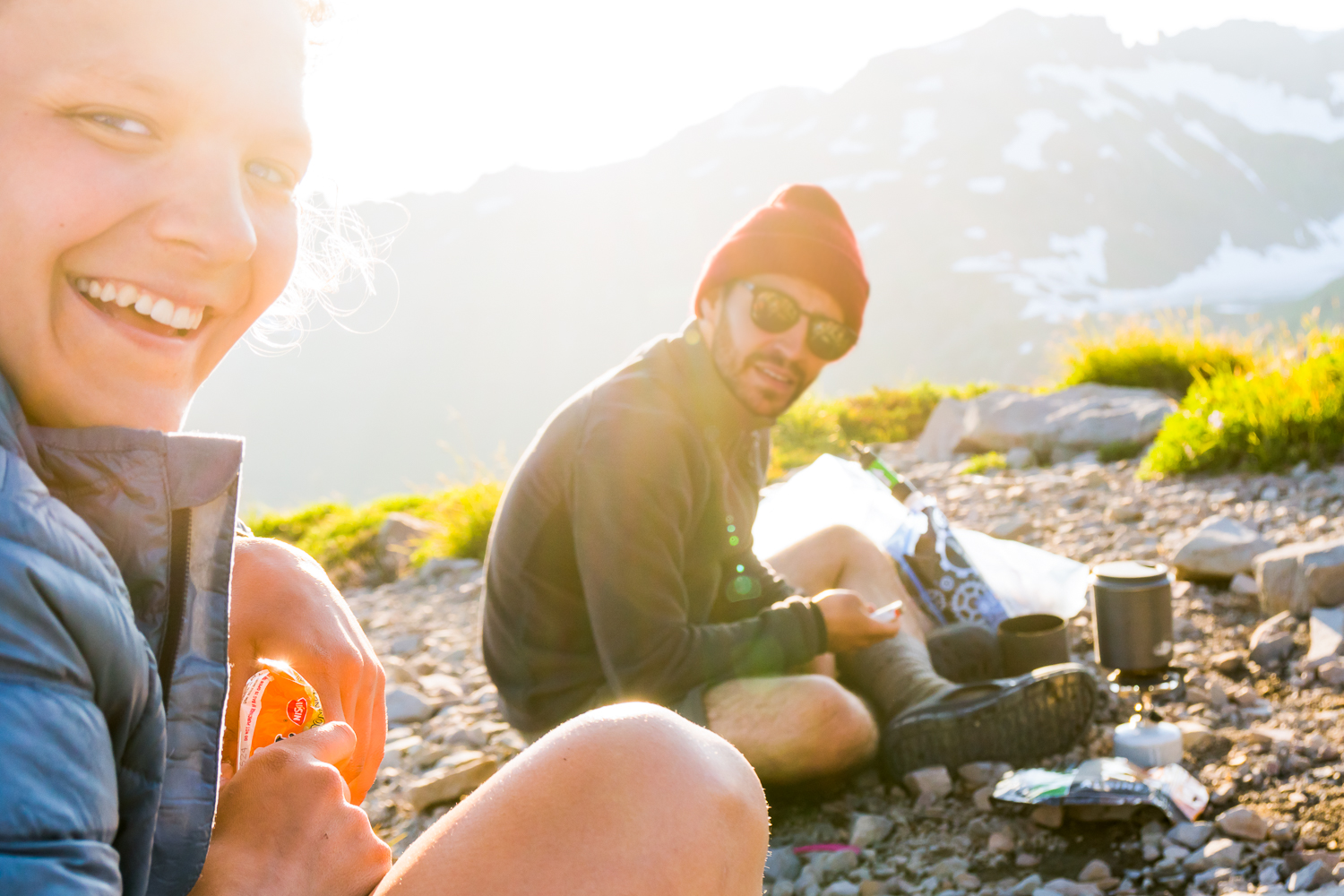 Juliette and Thomas, a couple, part of the Frenchtastic Four from Paris, eating dinner at camp at sunset high up in the Goat Rocks Wildernness. 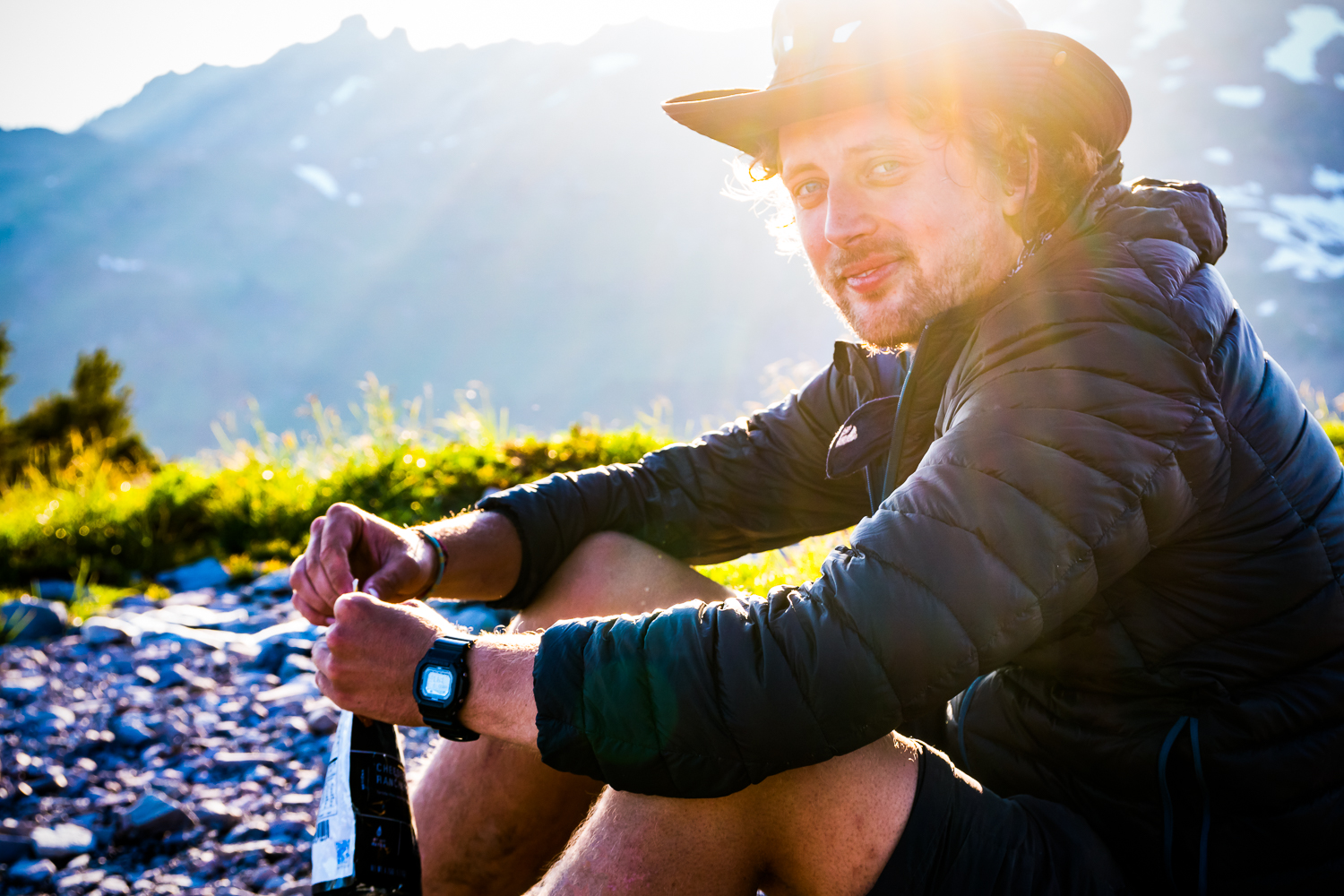 Pierre, part of the Frenchtasic Four, at camp near Old Snowy in Washington’s Goat Rocks Wilderness. We just finished a 19 mile day. I hiked with him and his 3 other Parisian friends through the Goat Rocks. These four French friends did most of the trail southbound and stayed together for most of the trip which is remarkable. 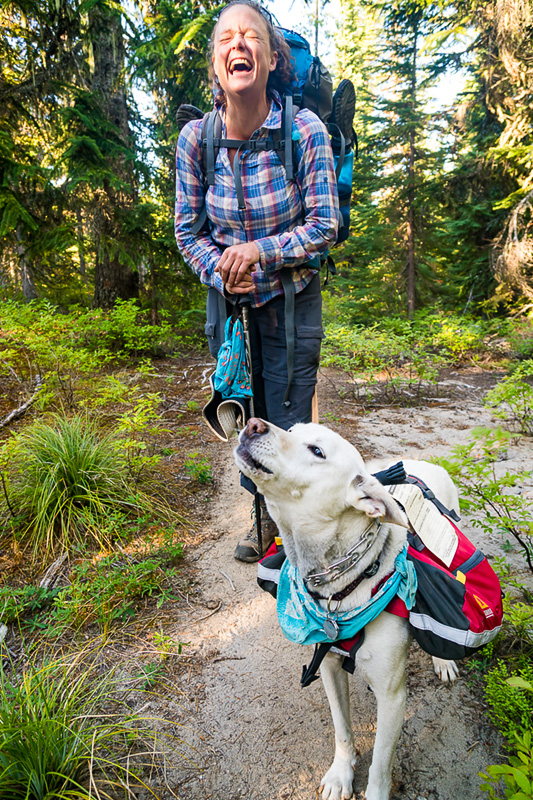 This is Custard, and his human companion, Julie, section hiking in Washington in the Mount Adams Wilderness. Custard has his own hiking permit attached to his saddle bags. And he liked to be vocal. Too good to pass up on this totally candid moment. 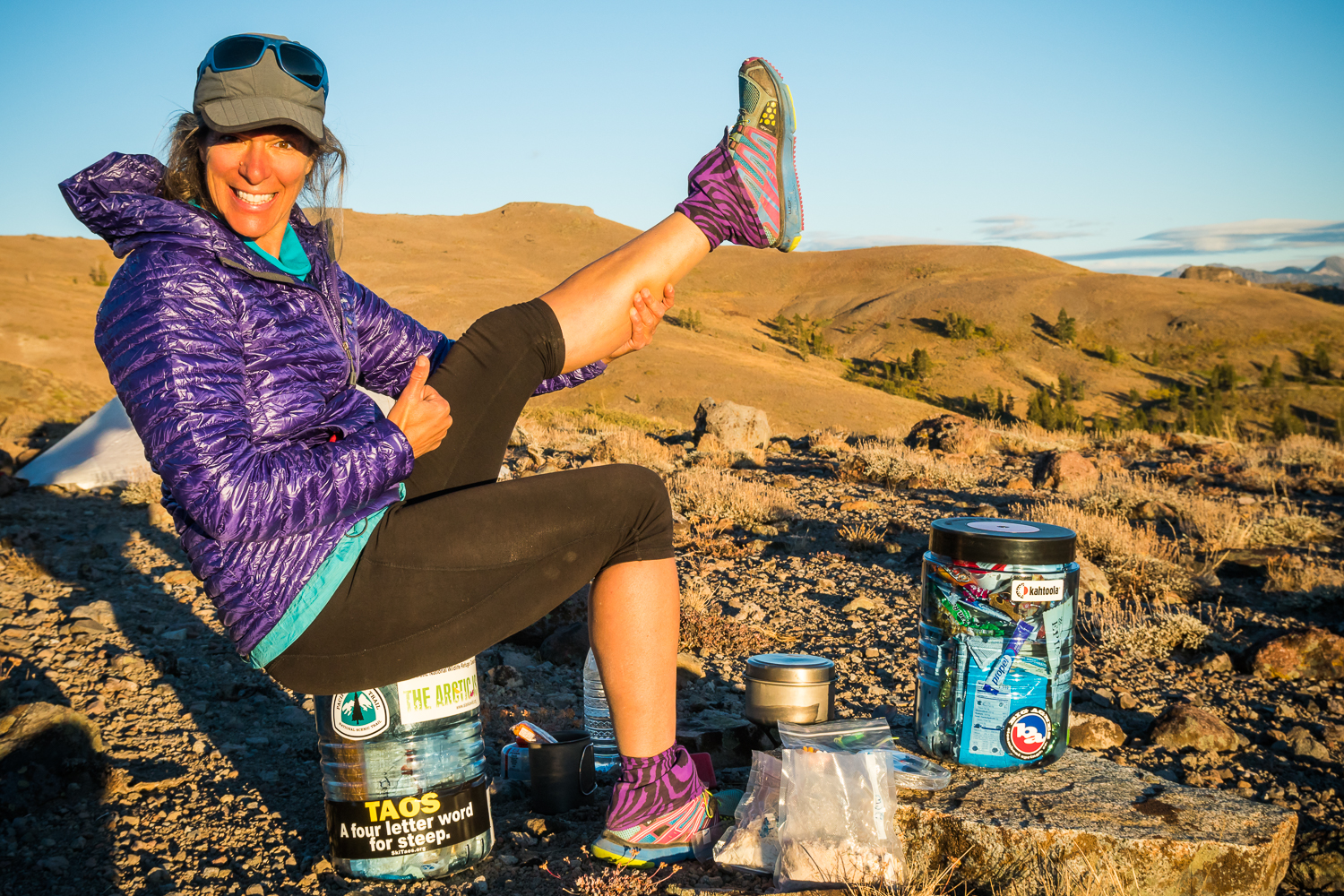 This portrait essay would be incomplete without a totally candid shot of my sweetheart, showing that her left leg is now fully intact 4.5 months after breaking her tibia plateau. Here we are at camp on her first night on the trail last fall in the Sierra. A combination of weather, business obligations and realistic limits after healing from a broken leg, we only hiked 230 miles in the Sierra, dodging a few snowstorms and storm force wind events. We will be back in late summer/fall, 2017 hiking through Washington, southbound. 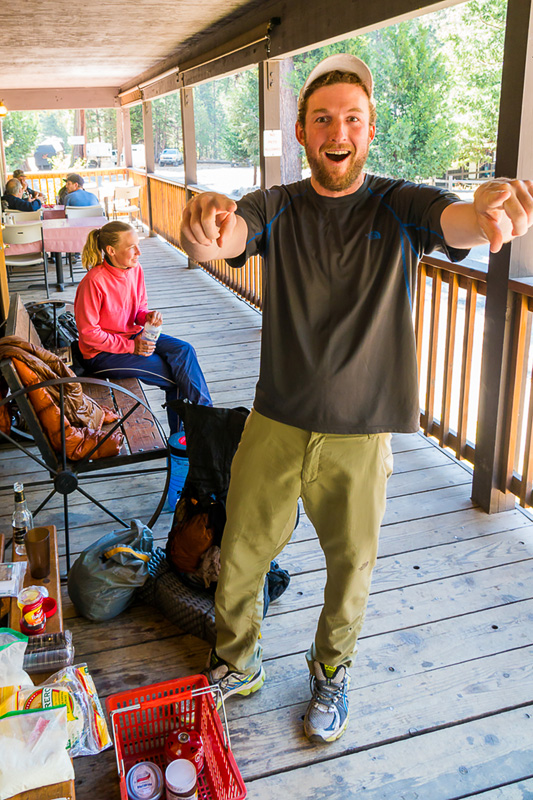 Hotwater (Brooke) is a Canadian southbounder who caught up with us as we were heading to Sonora Pass. We were both resupplying at Kennedy Meadows Resort. This is him packing up on the porch of the main lodge. Another hiker, Honey Badger, from Georgia is in the background. 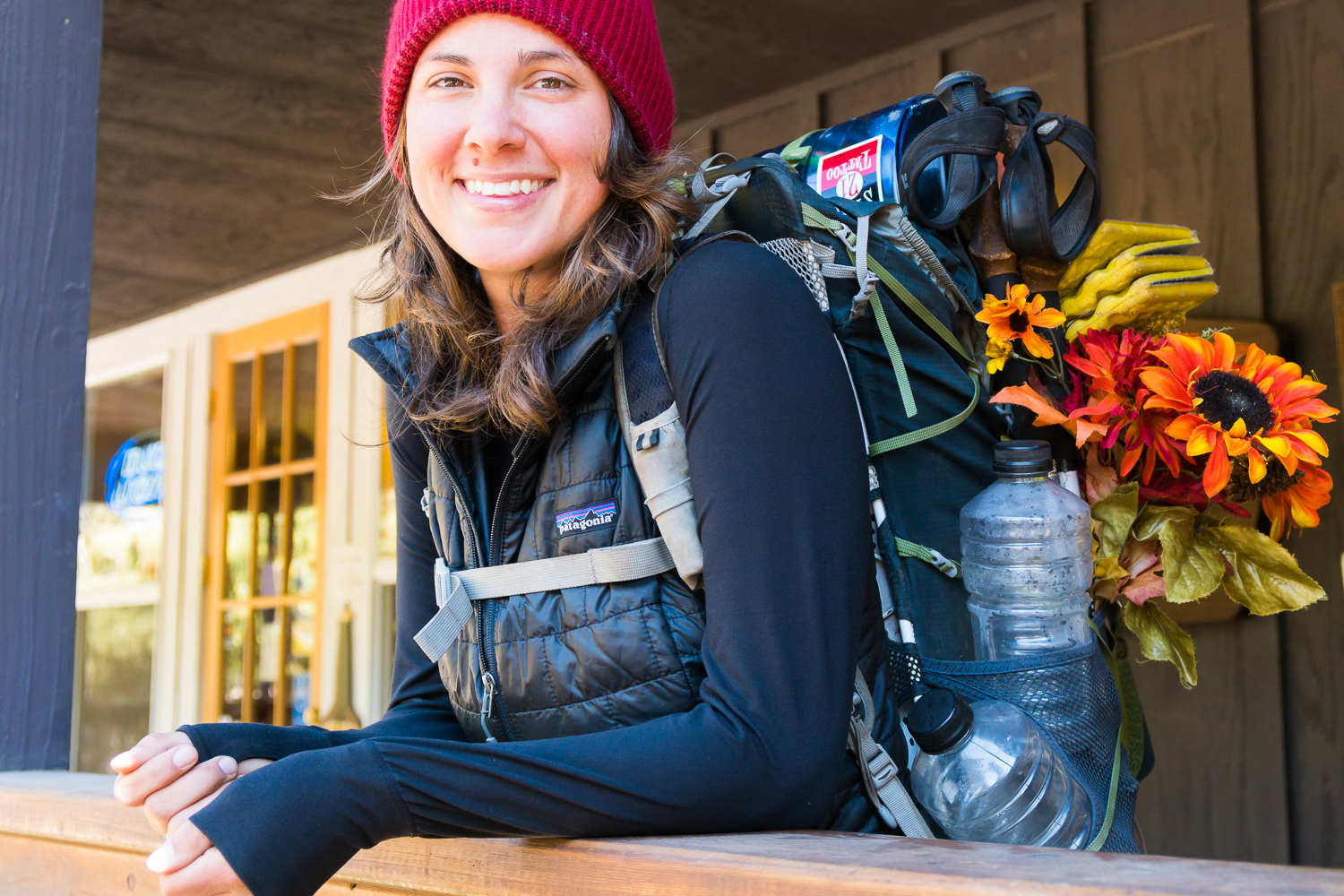 Spicerack (Aly) was a successful southbound thru hiker. I met her way up in Washington in early July as I was heading north to tag the border. She was heading south after tagging the US/Canada border. We chatted in the rain and cold but regretfully I didn’t photograph her then. I got a second chance when she arrived at Kennedy Meadows resort near Sonora Pass in October and I photographed her and her friend, Crusher, as she was heading back out to the trail. 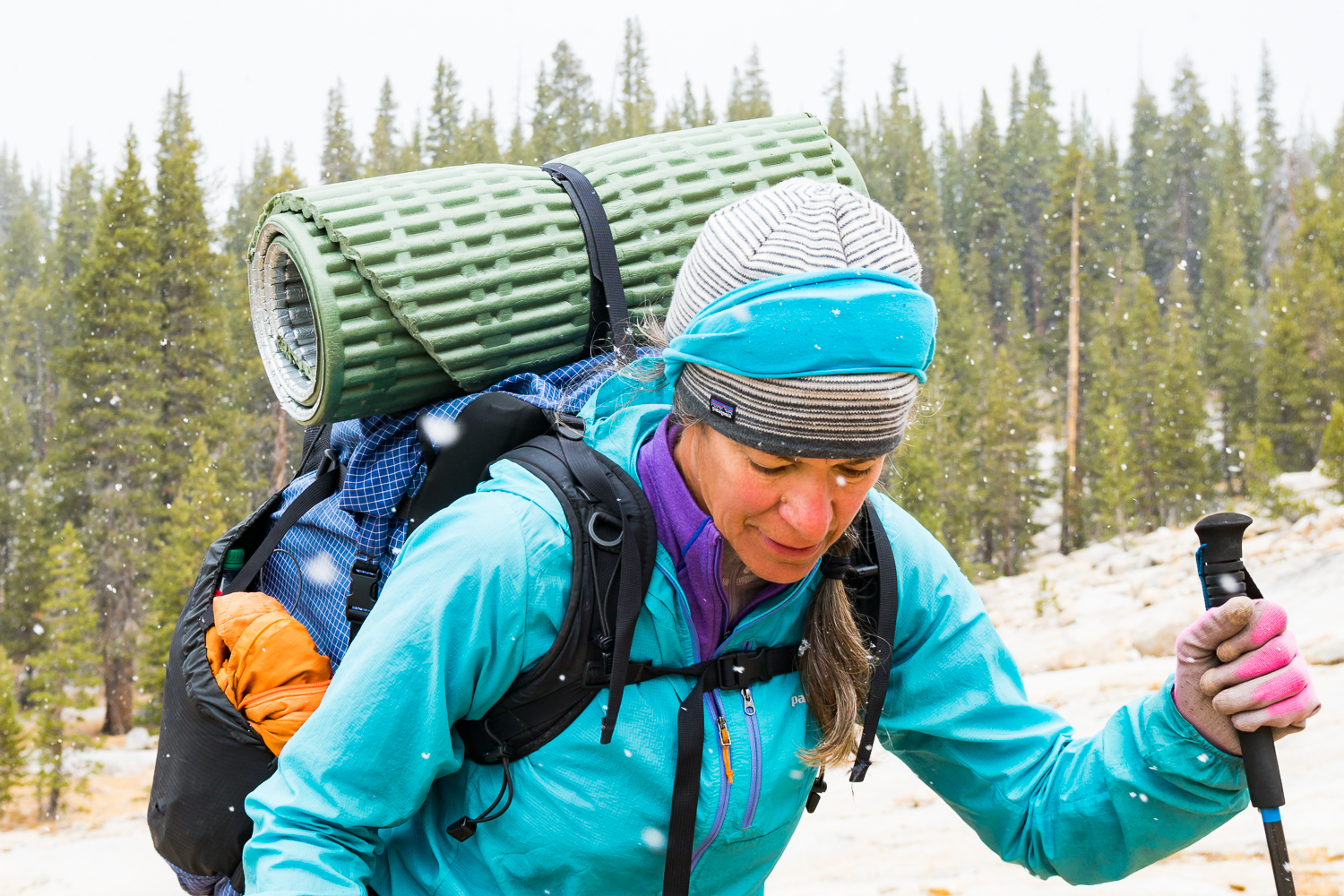 Lauri hiking into Tuolumne Meadows during the beginning of the snowfall that eventually closed the road over Tioga Pass into Yosemite a few days later. 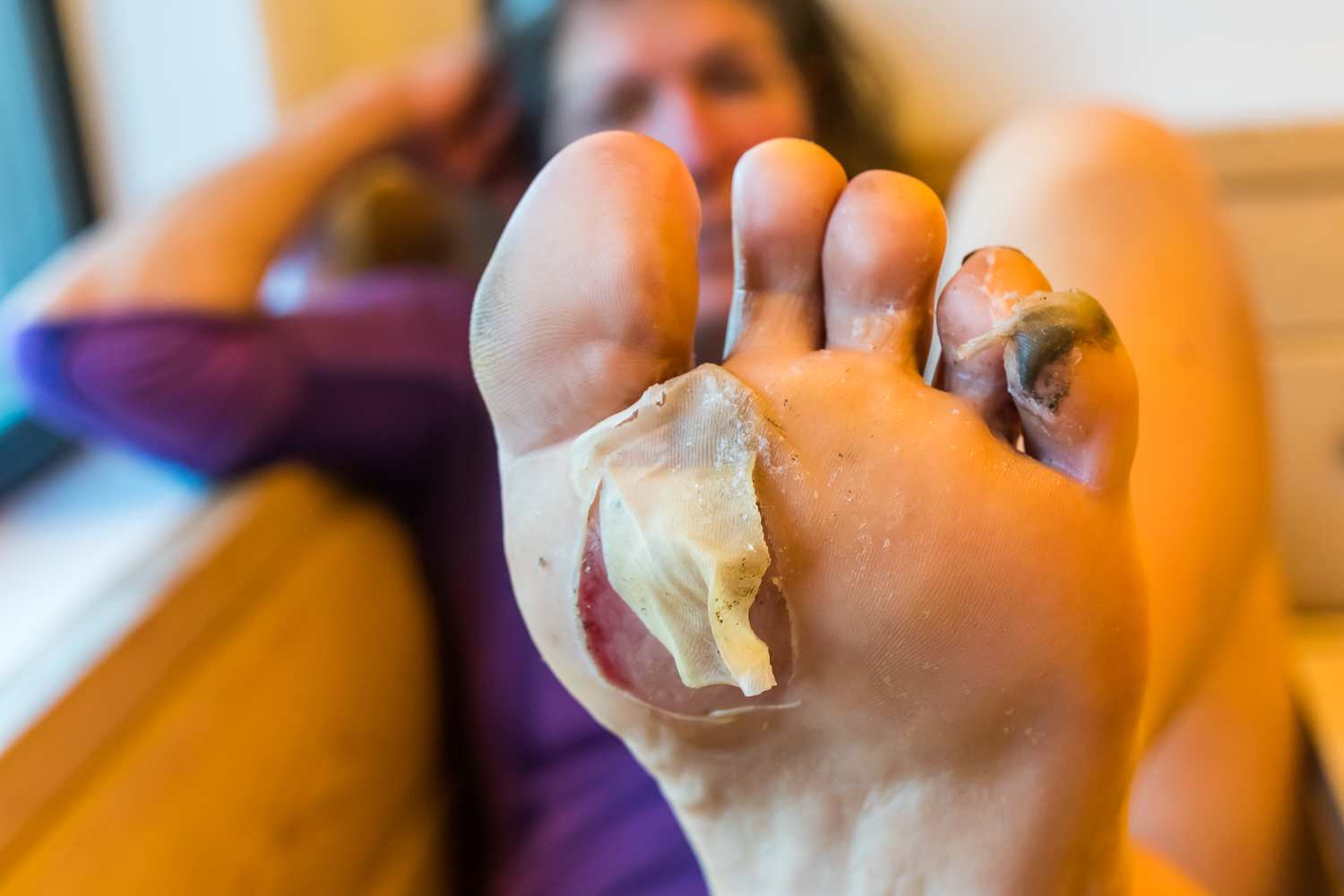 Not exactly a classic or flattering portrait but nonetheless, graphic and realistic. This is the price you pay for having not learned that skin can atrophy like muscle, when not used for 4.5 months. Her right foot was unscathed. I took this during a layover day in Mammoth Lakes.