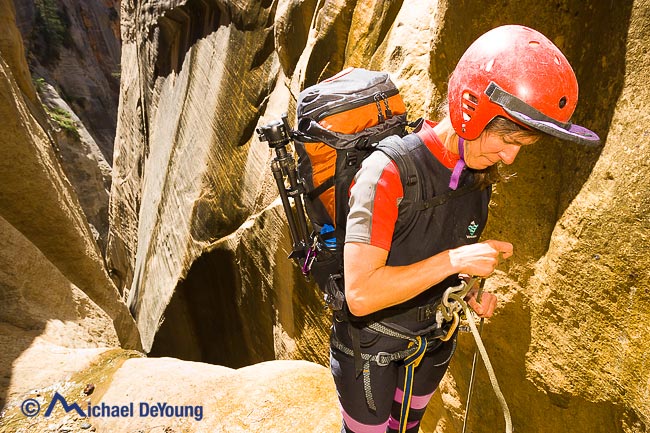 Photo backpacks are not really designed for serious backcountry use. Lauri about to rappel 180 feet in a remote Zion canyon. She is carrying our trusty backcountry Gitzo mini tripod.

Never been a big fan of photo backpacks.   On hike-in shoots I will carry the photo gear I need for the trip in a performance pack designed for real trail use.  Photo backpacks are best suited for schlepping your gear from the parking lot to the overhead bin on the plane and fall short of being serious trail packs.

There are several reasons for this.  To satisfy marketing needs, most photo backpacks meet airline carry-on regulations which means the suspension system is too short for taller people.   Most have too much padding making them too stiff and heavy for a performance pack.  This means the pack doesn’t flex and contour your body well on uneven and difficult terrain.  Camera gear is heavy enough without the pack itself feeling like lead too.   I wish some manufacturer would abandon the airline carry on size limit and make a taller narrower pack that has a more versatile suspension system.  After all, I wear a pack more often on the trail than going to and from the airport.

Other limitations of a photo backpack are that you have to take the pack off to get access to your camera and most don’t have a really good external tripod carrying system.

I got a first glance at a great new pack for adventure shooters from MindShift Gear at Photo Plus Expo 2012 in NYC.  (MindShift Gear is founded by the creators of Think Tank Photo and conservation photographer Daniel Beltra.) The pack is due out in the spring of 2013.

The MindShift has an integral fanny pack that holds a pro body with 70-200/f2.8.  The fanny pack spins around to the front for quick access to your camera without having to take your pack off.   That’s definitely a nice feature! It’s nice not having to worry about where to place your pack to avoid mud or snow just to get access to your camera. Demo’ing this on the show floor, this seems like a very well designed pack.  Some other nice features include optional padding in the top compartment that’s easily removable.  The adjustment straps on the well padded hip belt pull inward like they do on performance packs.

I also would like to see them design a chest holster similar to the Clik Elite model that easily clips on and off the pack.  (I’ve been using this chest pack for a couple of years and it is a great way to carry a camera at the ready with other packs.)  Overall this may be the best photo backpack for real trail shooting yet.

I really look forward to trying one out in the field when they come out this spring! 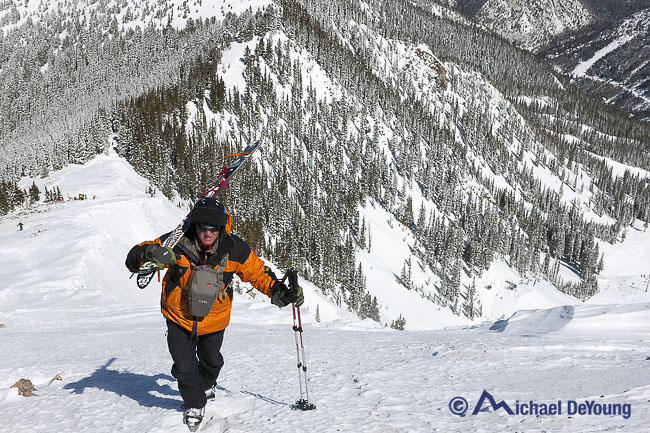 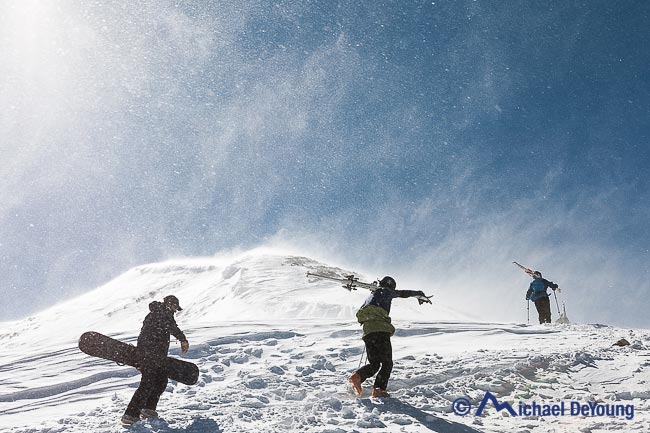 Skiers and boarders climbing Kachina Peak at Taos Ski Valley in gusty ridgetop winds. Quick access to my camera made this shot possible. I also was able to get my camera sheltered quickly again before being pounded by wind driven snow.