Goat Rocks Wilderness: This last section was only 66 miles and I would not have missed it for the world! I knew it was popular and that I would see an increasing number of people as I progressed south. Mile for mile I still think the North Cascades had the most stunning scenery all around you but the Goat Rocks, and specifically the Knife Edge, was to die for. In fact, just south of the Knife Edge we camped after a l9 mile day with the best view and best high camp to date. In addition to the stunning close mountains, we had sweeping views of Washington’s two highest volcanoes, Mt. Rainier, now to the north, and Mt. Adams dominating the southern skyline. Along this route were abundant wildflowers, lots of water, and lingering summer snows. The trail stayed above timberline for a long time and I love that! 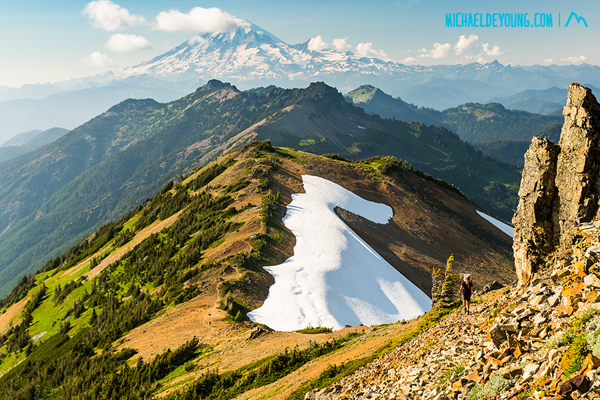 PCT in Goat Rocks Wilderness, Washington. Juliette (on Instagram @in_case_we_die) ascending the Knife Edge with Mount Rainier in the background. I think this says it all about why we hike the PCT. I still love the Washington Cascades.

The best part was hiking this entire section with the company of my new SOBO French friends, Thomas, Juliette (Dirt Arrow), Leo (Rainbow Trout), and Pierre (Refill). I had met them in Stehekin and we camped together the first night in the Glacier Peaks Wilderness then I leap frogged them a few times. We met again in Snoqualmie Pass where we had dinner and drinks. Rainbow Trout had a problem with his Hyperlite Mountain Gear pack and Lauri was able to help him get a replacement pack when we finished this section. (Hyperlite Mountain Gear provided great customer support.) We zeroed together in Packwood and hiked most of the Goat Rocks as a group. I was very appreciative to have them as companions and also as hiking subjects through this stunning section. Even though I was exhausted when we arrived at camp near 7pm after negotiating the Knife Edge, I found enough of a second wind to take some at camp and dinner lifestyle images of them in the warm evening light with sweeping views all around. So our first day was one of the best days hiking the PCT. It helped me, at least temporarily, forget about my agonizing feet. 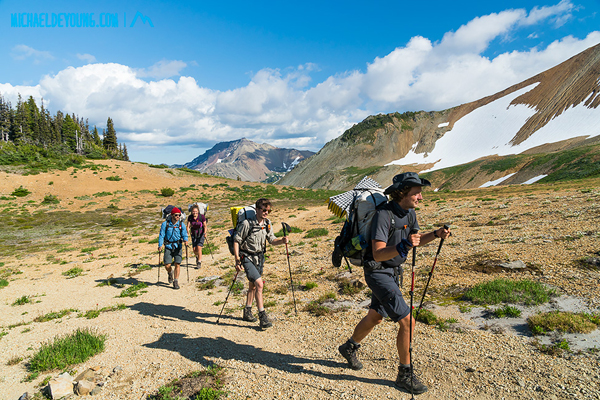 PCT in Goat Rocks Wilderness, Washington. The Frenchtastic 4 ascending toward the Knife Edge, all with HMG packs

Finally a PCT Hiker Rhythm: I was finally feeling like a PCT through hiker on this section. Through the Norse Peak section I was able to link 20+ mile hiking days, in fact 3 in a row. We did this section in 3 days. We left near 9am the first day and only did 19 miles since that day involved climbing above 7000’ again over the Knife Edge. I learned a while back to take what other hikers say about snow crossings with a grain of salt. Yes there were a couple of long crossings around Old Snowy Peak but I did them without batting an eye. Guppy stuff really.

My daily schedule involved getting up at 5:15, doing a little photography up high, and leaving camp by 6:45. Then you walk all day, remaining on the trail for 12-13 hours. Most committed through hikers are this disciplined. The key to making your miles is not to walk fast but walk long. I still maintain a steady go all day pace. My pace was about 2.5 mph when on good track which consisted of wide, smooth dirt with a little give to it and it slowed down to 1.5 mph when going over loose talus or deep, narrow horse ruts. My pace is near that of most hikers on level ground and slower downhill. On uphill climbs I do pretty good. I have lots of lung and leg power and uphill climbs are the easiest on my heels. But the heat slows me down.

On the third day I was hiking by 6am, 30 minutes ahead of the other 4. We finished our 25 mile hike to Forest Service Road 23 above Trout Lake 12.5 hours later. On that day I met 8 SOBOS before 8am. On the second day, I was surprised I did over 20 miles because I spent a fair amount of time photographing alpine meadows and flowers with a Mt. Adams background and then chatting too long with NOBO hikers. 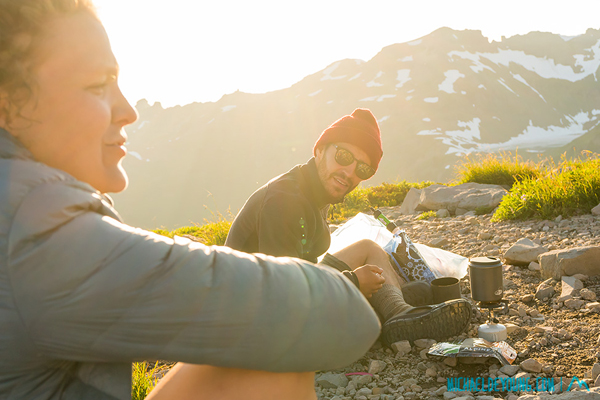 Will my pack ever get lighter? I still have the largest pack of any thru hiker and yes, sometimes I am self-conscious about it. For the Glacier Peaks section, my pack with camera, 8 days of food and 1 liter of water (there was no need to carry more) weighed in at 36 lbs. For Goat Rocks, I carried 4 days of food (we did it in 3) and my total pack weight with everything and 1 liter water was 29 lbs at the start. On our zero in Packwood I tried to get everything into the Hyperlite pack but it was just too tight and I felt like the thinner harness system would become an issue sometime down the trail with that weight. So I am sticking with my 4 lb custom made McHale pack. When the bugs disappear in the fall, I can shed 1.5 lbs of tent weight and the bulk of a small down bag by ditching the tub floor with bug insert on my Hyperlite Ultamid 2 shelter.

The French, as many other young hikers do, are all just sleeping on Z-rests. I can’t do that. I have a Ridge rest and an Exped Synmat air mattress. After 13 hours on the trail and eating dehydrated food and candy bars, I want a shot at sleeping comfortably. Overall I think I just take too much food. All the years of remote travel in Alaska have engrained in me to take extra food. Many hikers seem to cut it to a razor’s edge, coming into trail towns with virtually no food left. I ran into one hiker who was out of food and still trying to hike over 20 miles to White Pass. I’ve run into a fair amount of hikers who don’t set up camp until after sunset.

Pushing it to get the shot: On the second day, I met Click and Data, 2 other gray hairs section hiking. Click was lugging around a Canon 5D Mark III with I think either a 24-105F4/L or 24-70F2.8L. I just had to show him my Sony A6300 with equivalent lens, a Zeiss 16-70F4 that weighed half of the Canon outfit. I do still miss my Canon as I have the same outfit he was using. They told me about incredible fields of wildflowers below the north face of the 12,000’ Mt. Adams that I would encounter the next day. That’s why I got up and moving by 6am the third day. I wanted to push it to get some shots before the light washed out. I pushed 9 miles in 3 hours to make it to the location they told me about. I was a little late as we were getting into high angle backlight of late morning. I also met 8 other SOBOs on the way there and I tried my best to keep my chatting short. 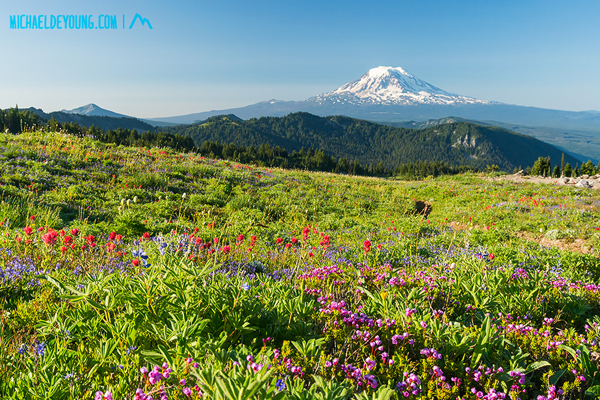 My longest stop was with a very nice solo woman with her white dog, Custard, who had his own saddle bags and permit. I took a few shots of Custard talking to me but I was still half focused on pushing on to the wildflowers. I had a senior moment and forgot to get Custard’s human companion’s name. I feel like an idiot.

I know dogs in the wilderness rubs some hikers the wrong way but I am a dog person and well behaved dogs and responsible LNT dog owners hiking are just fine with me. People who let their dogs run loose, chase wildlife and bark especially in camp do not belong in the wilderness. 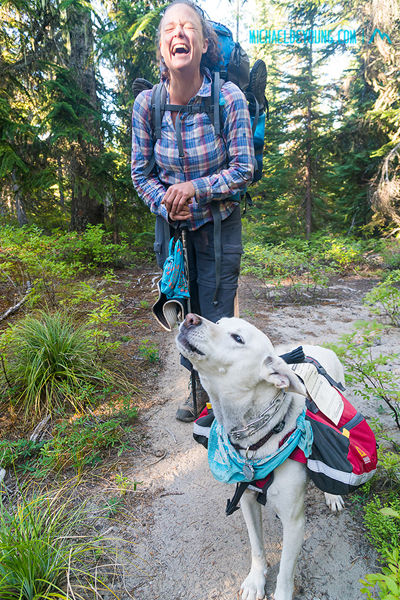 PCT in Mount Adams Wilderness, Washington. Custard, the talking trail dog with his own wilderness permit near Indian Springs

Back to Mt. Adams. Yes, I took images anyway, knowing that none would be sales worthy. I did it mainly to imprint this locations as a place to return to and do it right in the right light with a tripod. Mt. Adams is overshadowed by the iconic Rainier. Rainier also has more road access to fields of wildflowers with the mountain in the background. But honestly, Adams is just as photogenic and I saw potential for calendar quality images here. And it was only 5-6 miles from a dirt road trailhead.

Trout Lake Abbey: This sanctuary is worth the hitch and possible zero day. Trout Lake Abbey is a Spiritual Retreat center and certified organic farm run by Kozen, a bhuddist monk. This had to be the most peaceful place I’ve stayed. In fact we decided to stay another night. The accommodations are simple but beautiful and very reasonably priced. The breakfasts and company were also nice. Lauri found out about this from Cheri and Andrew (Reason Number 7), a SOBO couple I met in Glacier Peaks who are days and miles ahead of us. Not much to do in Trout Lake but eat at the cafe. Even if you are not a PCT hiker, go here. It’s worth it. 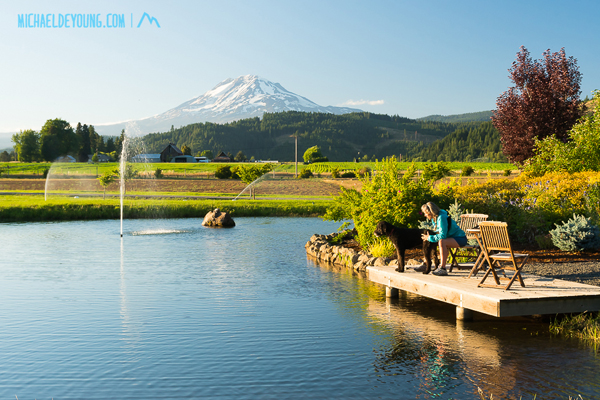 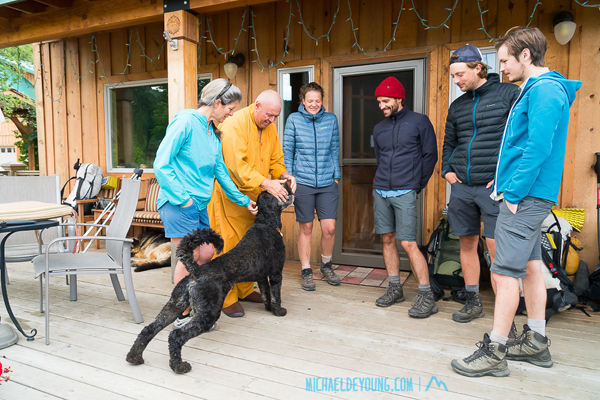 Venerable Kozen with his dog Ven and fellow SOBO hikers Juliette, Thomas, Pierre, and Leo on the porch of Trout Lake Abbey with “Trail Angel” Lauri

NOTE: I am off trail until September 5, principally to help Lauri who needed to return home to begin her recovery from her broken leg from earlier this year. It is time for me to sacrifice some and willingly support her as she begins her recovery and physical therapy after all she has done for me. It wasn’t right (even though she was willing) for her to drive 1200 miles in a day and a half to make her final appointment in Albuquerque last Tuesday (Aug 9), deal with physical therapy, mail my resupply packages, prepare new resupply packages, and then drive 1200 miles back to the Pacific Northwest all by herself. Therefore I am giving up completing the last little bit of Washington and the ceremonial crossing of the Bridge of the Gods as you cross the Columbia into Cascade Locks, Oregon. That day will come later (September). It’s her time now.

I also have to get ready to teach my pro studies workshop: Outdoor Photography at Rocky Mountain School of Photography in Missoula, MT later this month. There is still plenty to blog about and I plan on posting at least once a week for the rest of August and into September. So please stay tuned in for more of my PCT SOBO journey.

Upcoming blogs: What do you think about while hiking all day? and Backcountry Photography on the Washington PCT 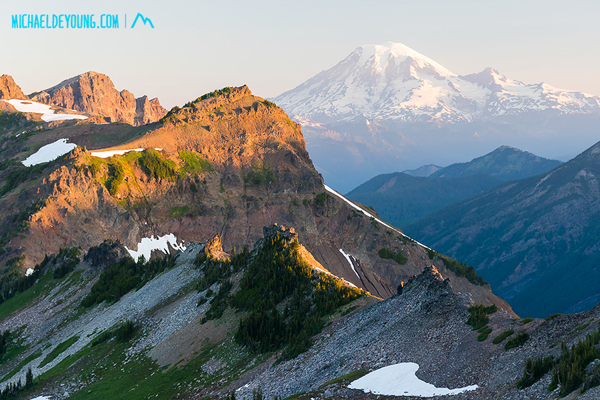 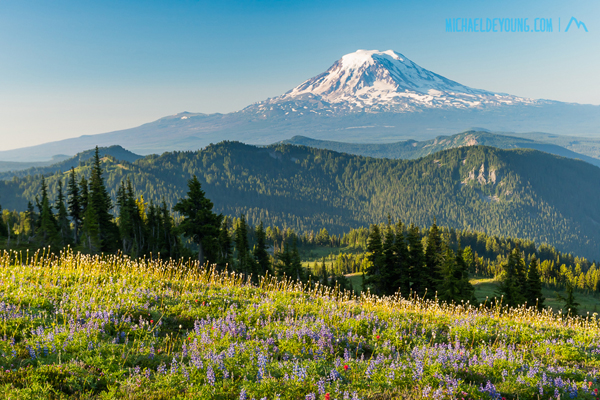 Wildflowers along the trail with towering Mount Adams, the 2nd tallest mountain in Washington State at 12,280′. 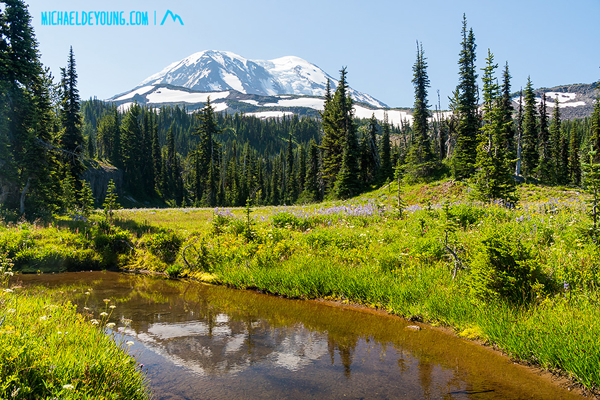 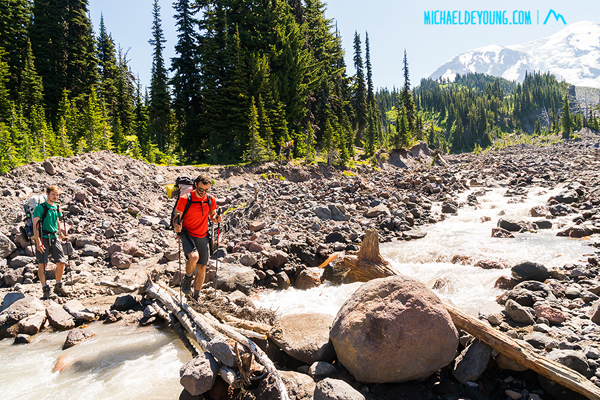 Thomas and Leo crossing a glacial stream along the PCT in Mount Adams Wilderness, Washington 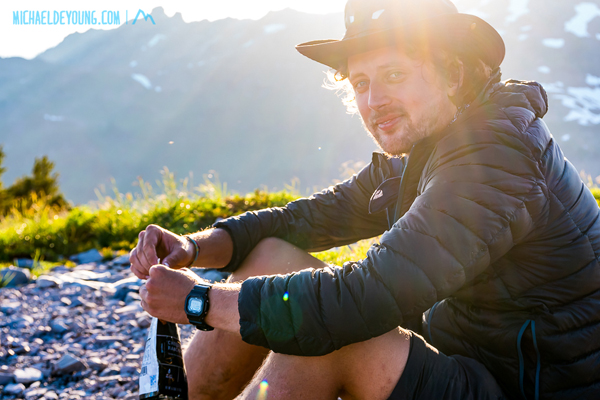 Pierre – trail name Refill due to his excitement that soda and ice tea refills are free here in the US. 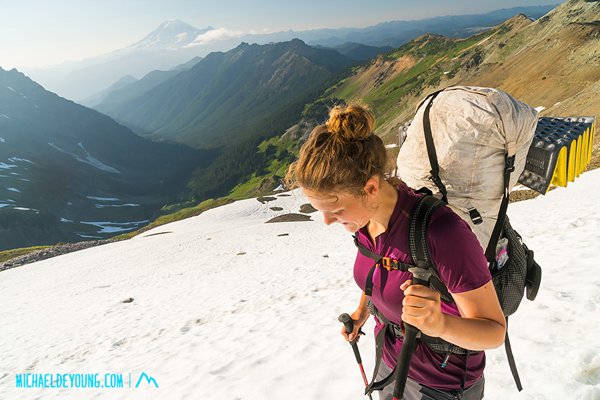 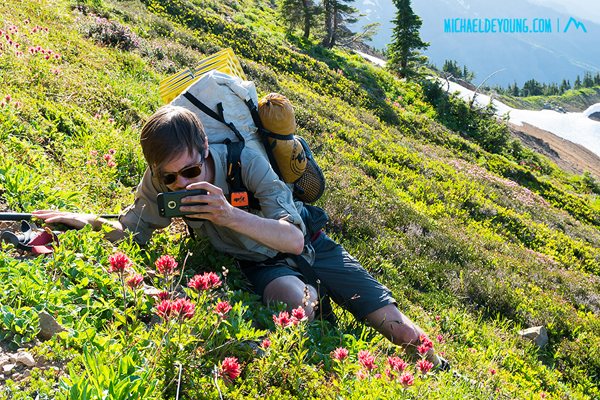 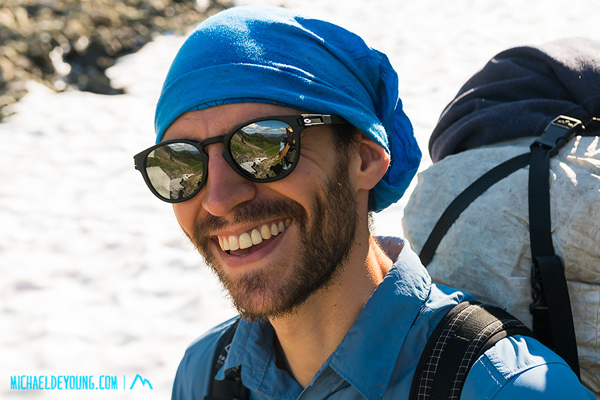 Thomas (hasn’t accepted a trail name as of this writing) hiking in the Goat Rocks Wilderness, Washington