We are now off trail again probably for the rest of the year. After 218 miles through the Sierra and after going over the highest pass on the PCT, Forester Pass at 13,200 (luckily in stellar weather), we bailed out at Cottonwood Pass. Looking at the weather we are having as I’m writing this in Mammoth Lakes where it feels much like Anchorage in October, I am glad we are off the trail. We are hearing reports of 9 inches of snow above 10k. As much as I love backpacking and will NEVER quit as long as I am physically able, I’m not sure if a continuous thru-hike is for us. But we will try again next year. We are already planning a section hike next year doing Washington and Oregon, southbound again. That will only be a measly 950 mile hike. And Lauri gets to see all the awesomeness of the Washington Cascades and maybe it won’t rain and snow half the time.

There are 3 primary reasons we pulled off trail.

First, the photographer in me took over my desires. The late season and drought meant long water hauls the further we got from Forester Pass. I began seeing 12, 18 and 30 mile distances between reliable water sources further south. Our packs were heavy enough without having to carry 8-10 lbs of water.

Like the high Rockies, the high Sierra is off-peak season and all the tundra is brown. I can see the effects of the severe drought here, sadly, and the landscape is starkly lacking in color while lower elevations, such as the Owens Valley, have a lot more color and more photo ops. In this section, I discovered the Minaret Range north of Mammoth Lakes in the Ansel Adams Wilderness and while there, despite the freezing mornings, I didn’t want to leave! In fact that section was the highlight of this section hike. A day either side of Forester Pass was also fantastic. A day south of Forester Pass, the Sierra took a turn for the lower and less interesting. We got spoiled being immersed in this beautiful and quiet high elevation wilderness through the remote sections of Yosemite and Kings Canyon/Sequoia National Parks. All I wanted to do was get back to some of the more photogenic places we had recently hiked by. I know it sounds kind of elitist, but I got bored with the scenery I saw in front of me heading to Kennedy Meadows and the prospect of camping close to roads and undoubtedly hearing vehicle noise and gunshots the closer we got to Kennedy Meadows. Prior to the PCT we have always sought out wilderness areas to backpack in. A big adjustment for me is dealing with the fact that not all of the PCT is in wilderness. Much of it goes near and across roads, dams, power lines and other things I’d rather not be around. I guess I’m not ready to motor through the less desirable sections of the PCT knowing we could be more productive photographically in areas close by.

Second, I really underestimated the impact of the shortening days. Considering the following factors, Lauri’s pace, restricted amount of food we could carry in a bear canister, and an 11-12 hour hiking day it started feeling like a forced march. I felt like we were having less time to really enjoy the trail and had to make miles. The routine was to get up at 6am and pack up everything up by headlamp, half the time in sub freezing weather to hit the trail at sunrise, (about 7am the day we bailed out over Cottonwood Pass) and hike until about 45 minutes before sunset, set up camp and eat dinner as it was getting dark. We camped mainly at high elevation for views and photo ops and thus could not make campfires. So by 7pm we were in the tent for 11 hours to stay warm. Honestly, we were lucky and only had a few cold mornings where water bottles froze and hands became painful breaking camp and hurt for an hour or two until body heat from hiking kicked in and thawed out extremities. 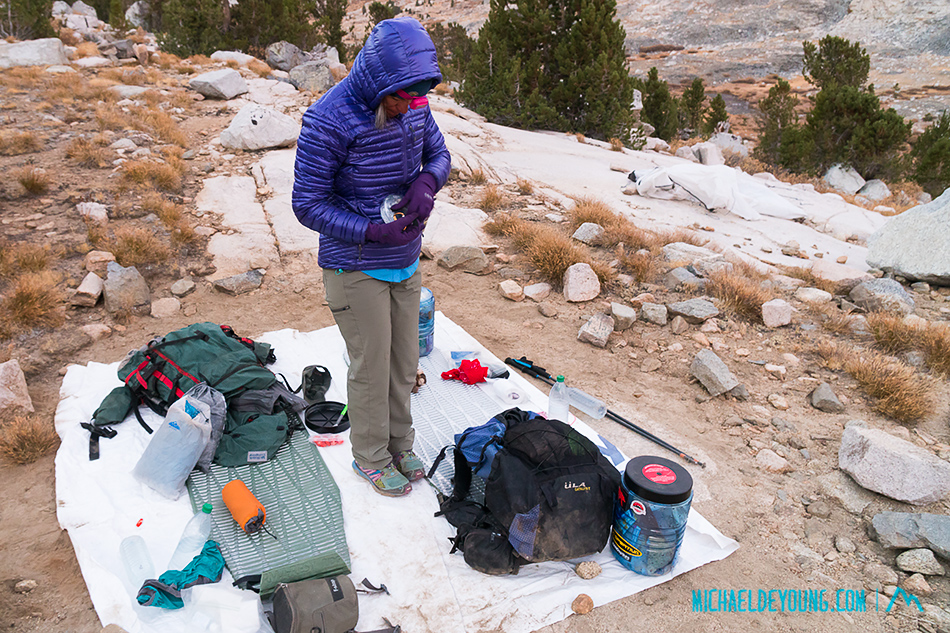 After dressing in all our warm layers and eating, it is easier to pull the tarp tent away and just pack everything up without the confines of the tent walls. We use custom cut Tyvek house wrap as ground cloths. To save weight, we left the bug insert and bathtub floor insert to our tarp tent at home. No bugs or creepy crawlies in the high elevation cold of fall.

Finally, Lauri had to listen to her body and most importantly, the doctor. This hike was a test and was both a success and a setback. I’m really proud at what she accomplished, hiking 218 miles with a 25-32 lb. load through the tough climbs and descents of the High Sierra only 4.5 months from her leg break. Most long distance hikers I spoke with talked about needing 300-400 miles to get really trail hardened feet and legs. That was my experience as well. It took most of Washington for me to sustain daily 20+ mile hikes day after day with out having to live on Ibuprofen. We just simply did not have the time to build up to that before winter hit the high Sierras. She had to try and remain optimistic. The doc said try but that if sustained multi day pounding caused too much pain and inflammation that she might be impeding the healing process. So more rest was called for. All in all, she averaged 15 miles days with a couple close to 18. I think living at high altitude really helped. I marched up Kearsarge Pass at 11,700’ and Forester Pass at 13,200 without feeling affected at all by altitude. 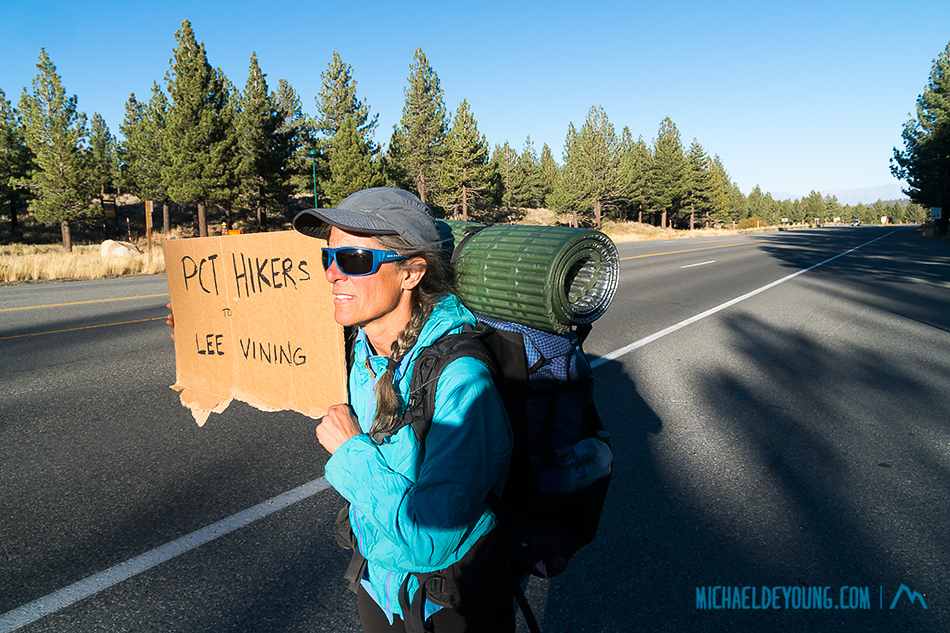 On days when the Eastern Sierra Transit Authority bus was not running, we resorted to hitchhiking

As with Washington, this hike introduced us to some great locations to go back to, and we also met some great new people. I do enjoy the trail culture and hanging out with other “hiker trash” and experiencing the generosity of trail angels who helped us out. I feel like living out of a backpack and hitchhiking on the highway to and from and between trail access points gave us a taste of the 60’s free spirit lifestyle that we missed, since we were only elementary school kids in that decade. That’s OK. Better late than never. Anyone know when the next Woodstock will be? Two young ladies from Seattle hiking the JMT (John Muir Trail) which shares a stretch along with the PCT.

Time to put miles on hold. Luckily, we gave ourselves 3 full days to cover the 27.5 miles from Tuolumne Meadows in Yosemite NP to Mammoth Lakes. That made for a leisurely pace for a thru hiker. When we passed by the small pond at Island Pass in mid afternoon we both knew we would camp there and shoot this stellar scene at first light. The view of the jagged Banner Peak with potential reflection and favorable orientation to first light was too good to pass up. I was living what I preach. In my workshops I stress that 80% of the success of an image is simply finding the right image and being able to forecast when all the components of a good to great image will coalesce. The actual shooting is only a minor part of it. When I hike, I occupy my mind by constantly analyzing what will make a great image. I stay keenly aware of where the sun will be at the ends of the day and what areas give the best color and most interesting lines. As a general rule, I try to camp high where the views and light are. That comes as a risk of dealing with the perils of exposure to the elements.

It’s all a gamble. Sometimes you have to accept that all your patience and determination and what you “thought would make a good photo” just doesn’t pan out. Gotta know when to hold ‘em and when to fold ‘em. In this case it all came together and in the 700 miles I’ve hiked, scenes like this where it all came together were the exception not the rule. The afternoon gave me the time to scout viewpoints and develop my vision for the morning. I thought about the shots all night as I tossed and turned, fearful I would miss my alarm and the best light which comes at you fast at sunrise. Several times during the night the wind blew and I got concerned. When the alarm went off and I looked at the scene, a feeling of calm and elation came over me. I knew we had this in the bag! Yeah it was cold. Get over it. Be numb to it. Get out and do your thing. This is what you live for and it is all right here in front of you! This didn’t fall into your lap. You recognized it, waited for it, and put it all together. This is what it is all about.

We are not quitting hiking. In fact we spent another week day hiking parts of the Eastern Sierra and will post another blog about that. We are off to the Grand Canyon for more backpacking and hiking before leading our Zion Fall Landscapes workshop begins. 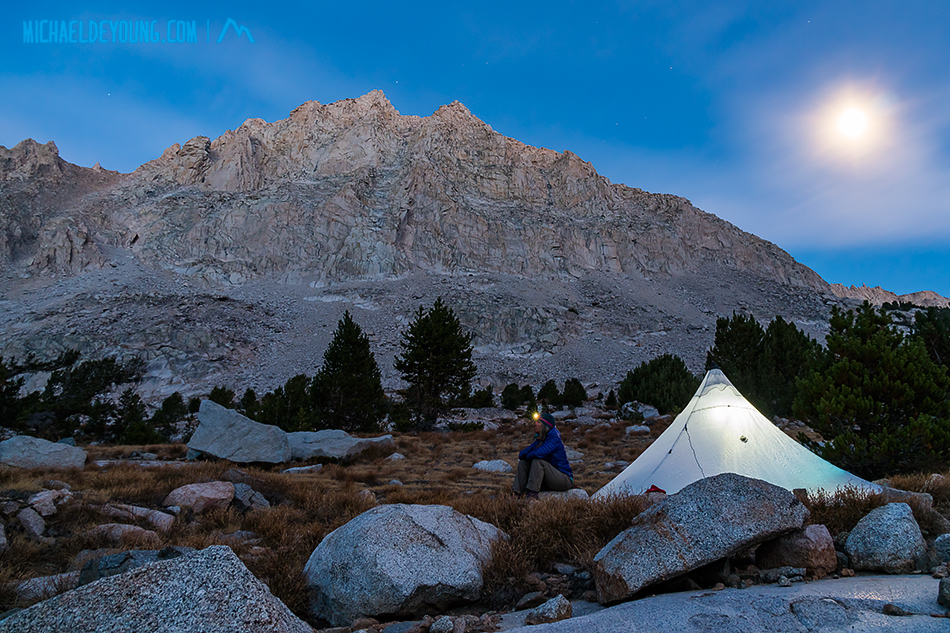 Camped just 4 miles north of Forester Pass at 11,000 feet. Enjoying a few minutes of rest before getting the inside of the tent ready for the night. Fall colors in the tundra along the trail at Island Pass Rocks stairs leading towards Donahue Pass. These stairs are often found as one approaches passes in the Sierras. 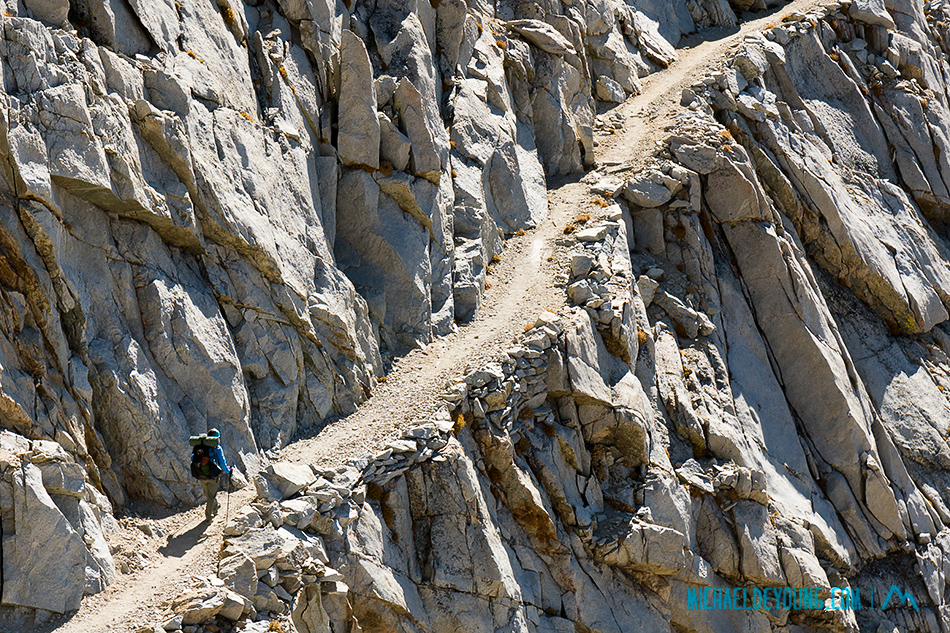 Trail blasted into a granite cliff on the south side of Forester Pass. 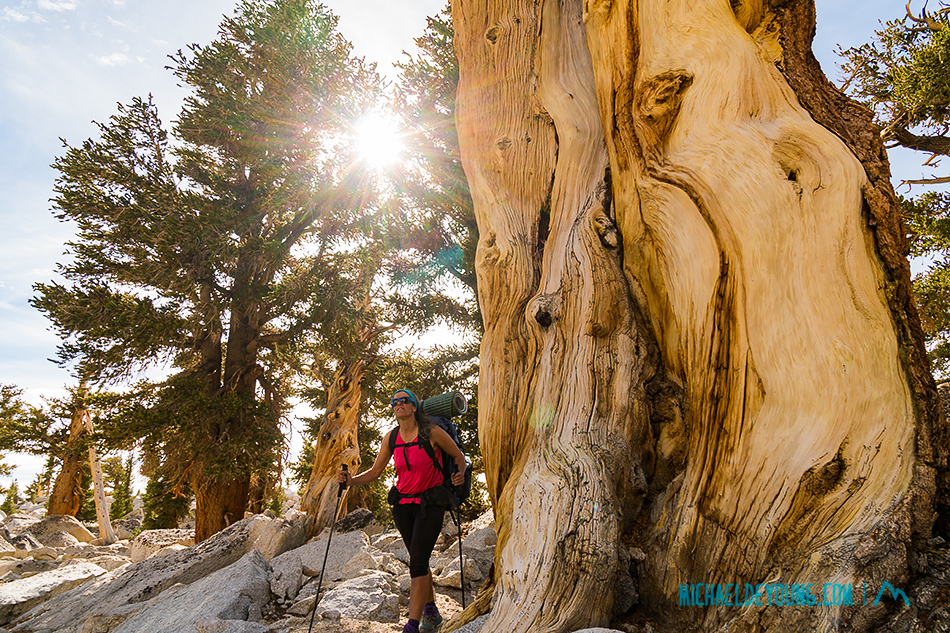 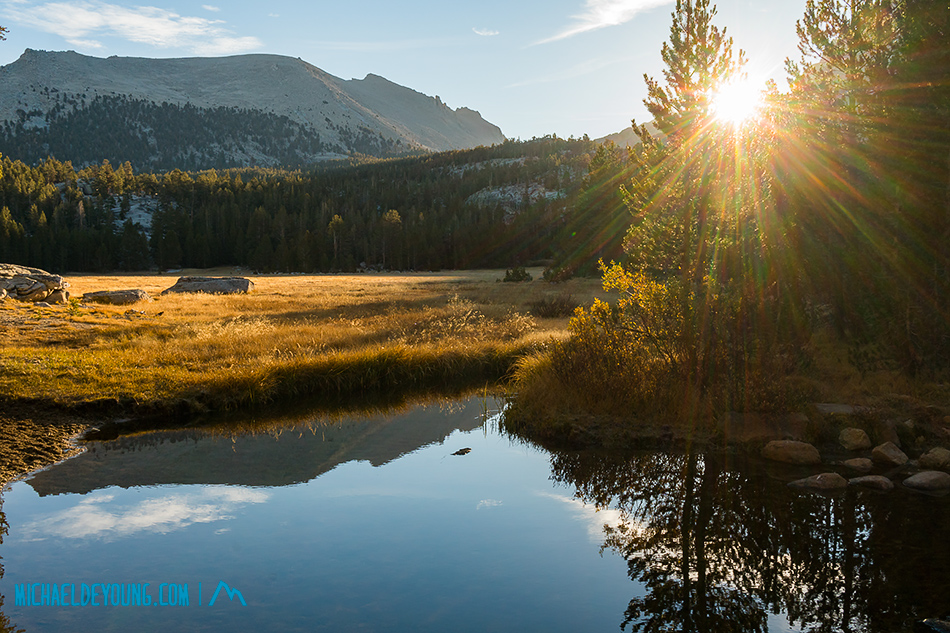 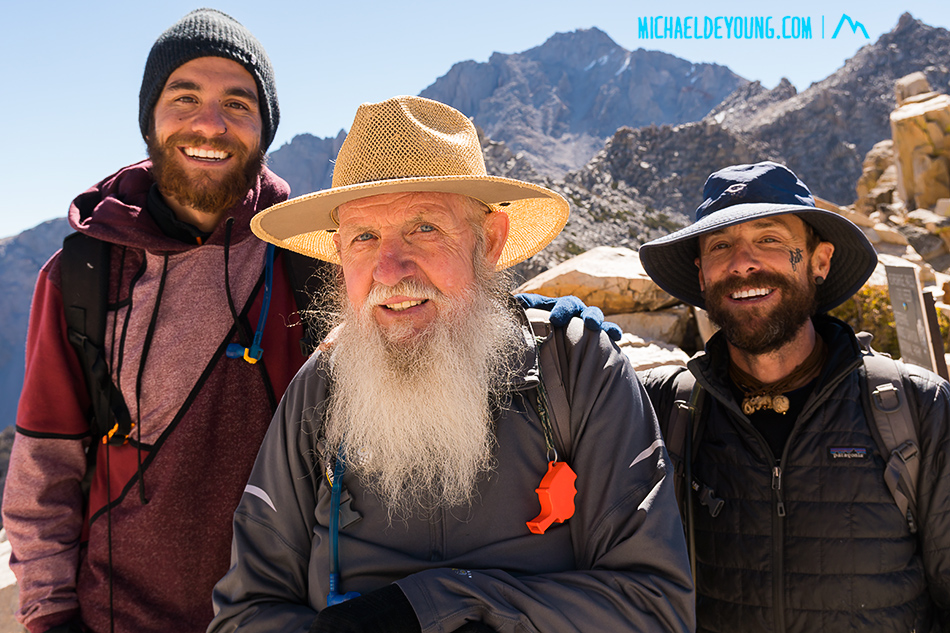 3 generations of hikers on Kearsarge Pass. We met these gents as we were getting back on the trail from our resupply at Independence 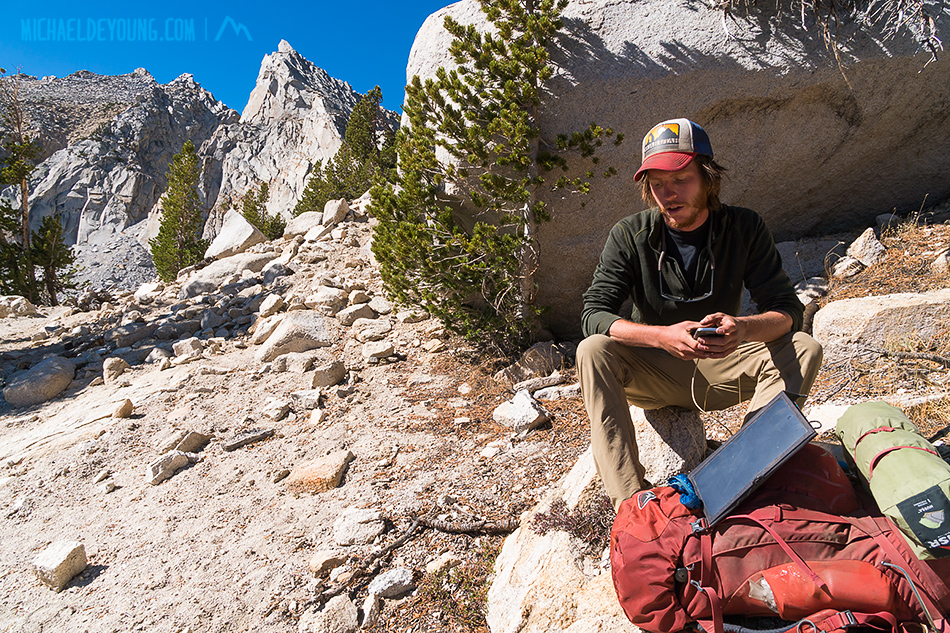 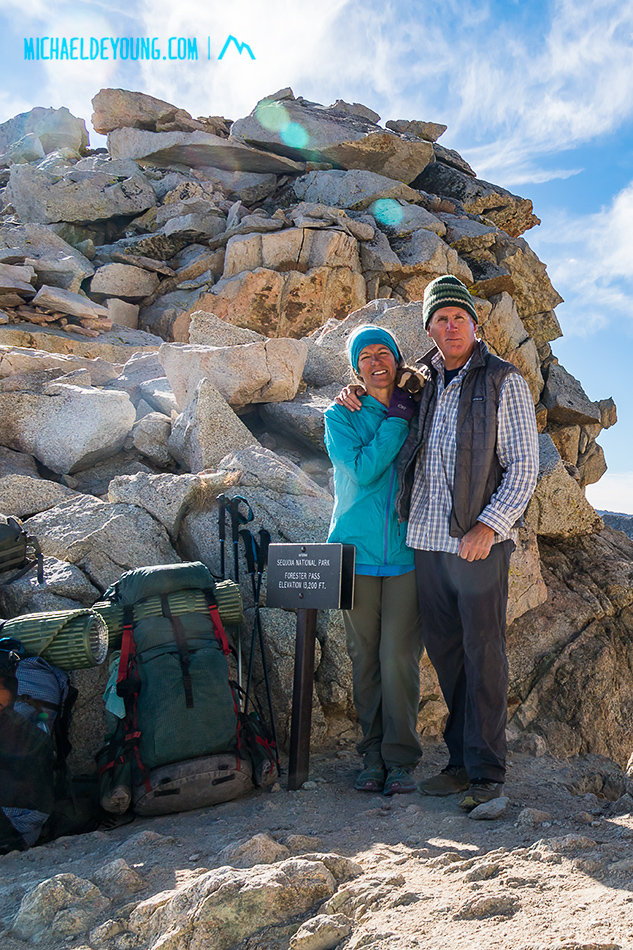 self portrait at Forester Pass at 13, 200 the highest point on the PCT