THE GOOD, THE BAD, AND THE SIERRA. 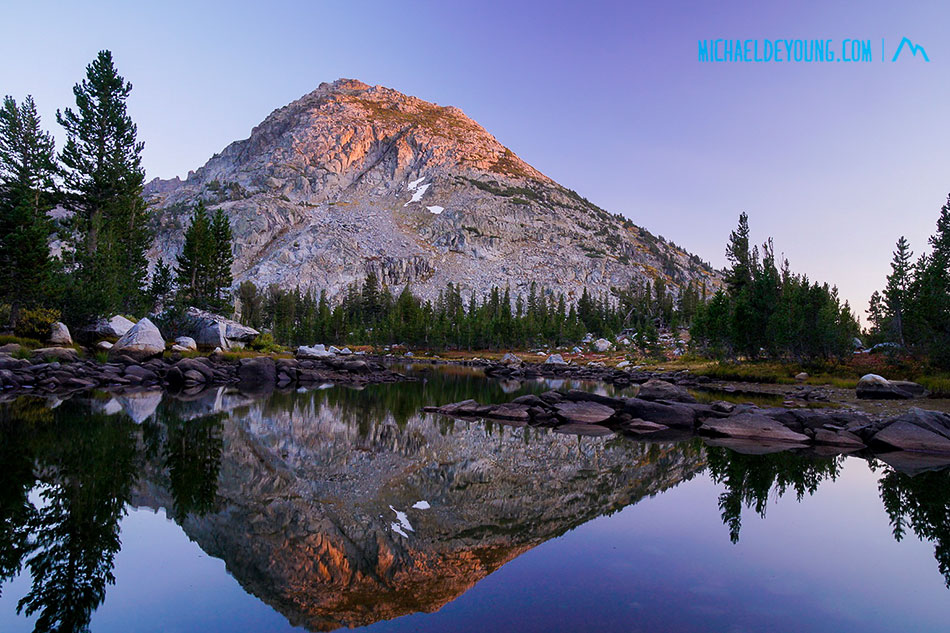 Last light from Dorothy Lake just inside the Yosemite Wilderness.

I’ll try to keep this blog shorter on text, with lots of pics to look at.

This section had many firsts for us. The first first is finally, FINALLY, after 4.5 months of healing from a fractured tibia plateau, Lauri is on the trail! This section was a test to see how her stamina would evolve and whether she would be strong enough for the 125 mile long haul between off-season resupply points (Mammoth Lakes to Onion Valley TH) in the highest of the Sierra with shortening days, chilly mornings and daily big climbs of 2500’ to 4000’ to 11 and 12 thousand feet.

This was also our first time hiking in the Sierras and I was excited about that. The whole region is in severe drought and with late season vegetation mostly brown the landscape is surprisingly stark with only a few colors: grey, brown, blue, conifer green with splashes of riparian autumn colors. I knew I would be challenged visually and have to rely on great light and strong color created by the light to carry my images.

This was also the first time we cold contacted trail angels in South Lake Tahoe who opened their hearts and home to us to help launch the trip. It is wonderful to know there are gracious people out there willing to help adventure seekers like PCT hikers.

This was also the first time we hitchhiked together over a long distance but it turned out just fine. 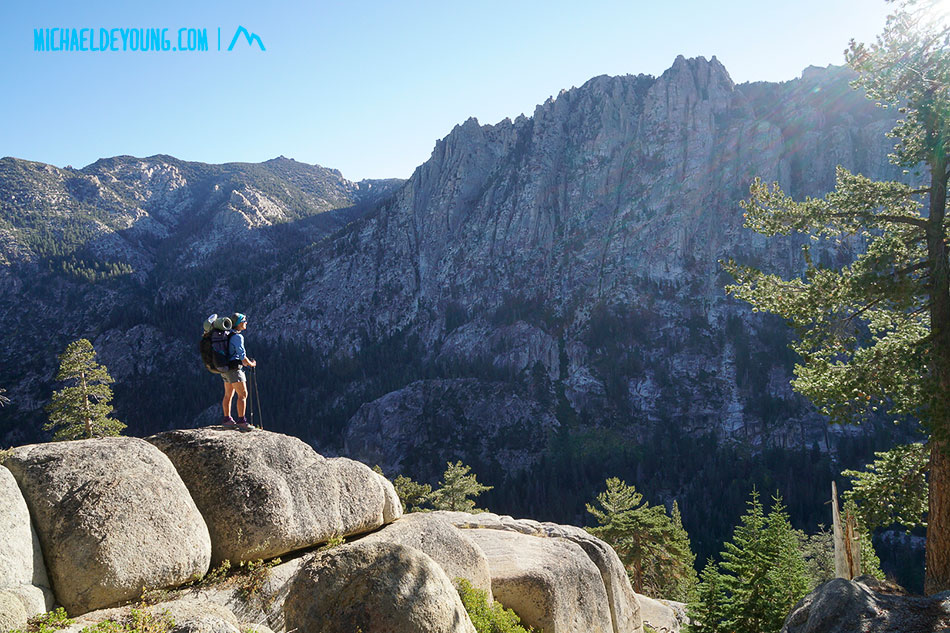 We passed this camp and Yosemite-esque view in mid morning wishing we pushed farther the previous day and camped here! These cliffs would have lit up fiery pink in the last light of the day. Discovery and imprinting of places to return to for photos are part of the journey. In a way it is good to feel the pain of having missed something you know would have turned out great images.

We were fully prepared for and expecting cold, heat, dry, wind and snow and we got it all. It doesn’t mean we liked it but we were expecting it. Hiking through the snow on our last day into Glen Aulin and Highway 120 at Tuolumne Meadows was quite peaceful and soft as we walked through an empty wilderness in off season, knowing that a month earlier this very trail was a highway full of hikers. 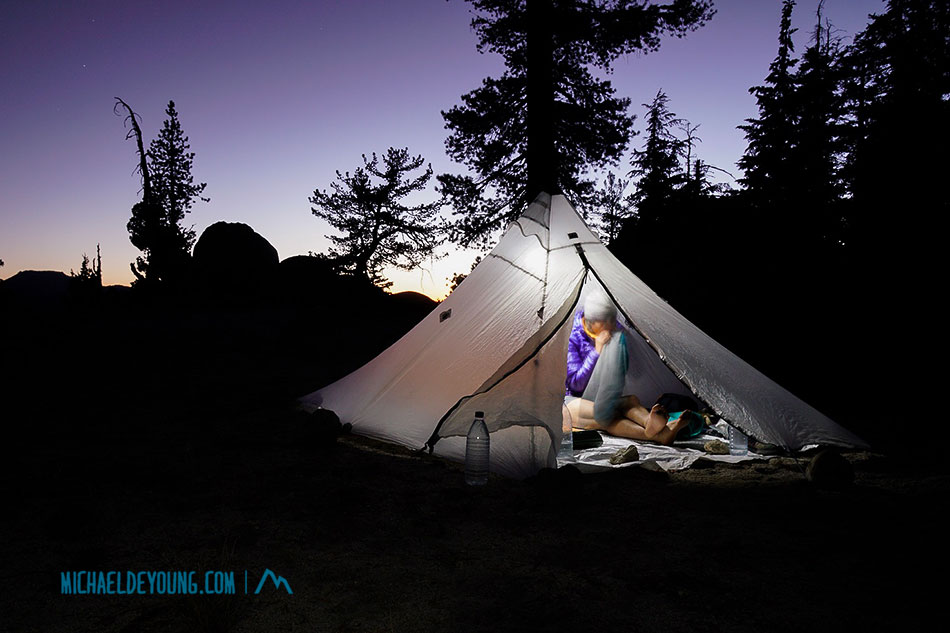 Camp in the Carson Iceberg Wilderness. Lauri blowing up a Sea to Summit pillow. We got used to going to bed between 7-7:30pm. This was one of our warmest nights on the trail camped at about 9000 feet.

Hats off to the Ultamid (www.hyperlitemountaingear.com). It seems like most hikers like to camp in river bottoms with shelter near water. Not me. As a photographer, the views and best light are up high. So is the wind and the full bite of any nasty weather. The Hyperlite Mountain Gear Ultamid can be a bit of a pain to set up but it tests well against brutal winds and, when set up properly, it can easily withstand 40-50 mph winds. We tested that several times on the CDT (Continental Divide Trail) and in Alaska with fierce katabatic glacier winds.

Our first night was started calm with great sunset images. We awoke to brutally cold winds at sunrise and had to pack everything up inside the tarp then taking it down was a two person operation. (We left the bug insert behind to save a pound thinking that in a dry climate and no bugs it was not needed.)

Not all of the PCT is pretty and jaw dropping wilderness and the first 75 miles south of Echo Lake certainly proved that. We crossed 2 paved passes before landing at Sonora Pass for an unexpected hitch to Kennedy Meadows Resort for a shower and fatty salty food. Lauri got a blister on day 2 and it got progressively worse until we pulled off trail on 10/3 after 12 days. Sadly, the Leuko Tape we applied only seemed to make it worse. She wore her sock for the last three days concerned about removing it would re-open the raw skin below.

We started slow, going 12 miles the first day and gradually ramping up to 18 miles. We throttled back on the last 75 miles from Sonora Pass to Tuolumne Meadows. Some of the guide books labeled this section as some of the toughest trail on the PCT. Having hiked Washington, this was hard to believe. The elevation profile indicated some decent climbs with a couple in the 2,000 – 2,500 foot range. But it was the track itself that was laden with loose rock and steep, short step ups and downs that made it slow and difficult. None of the “dangerous” fords existed this late in the season and we only had to wade across a very benign Kerrick Creek. 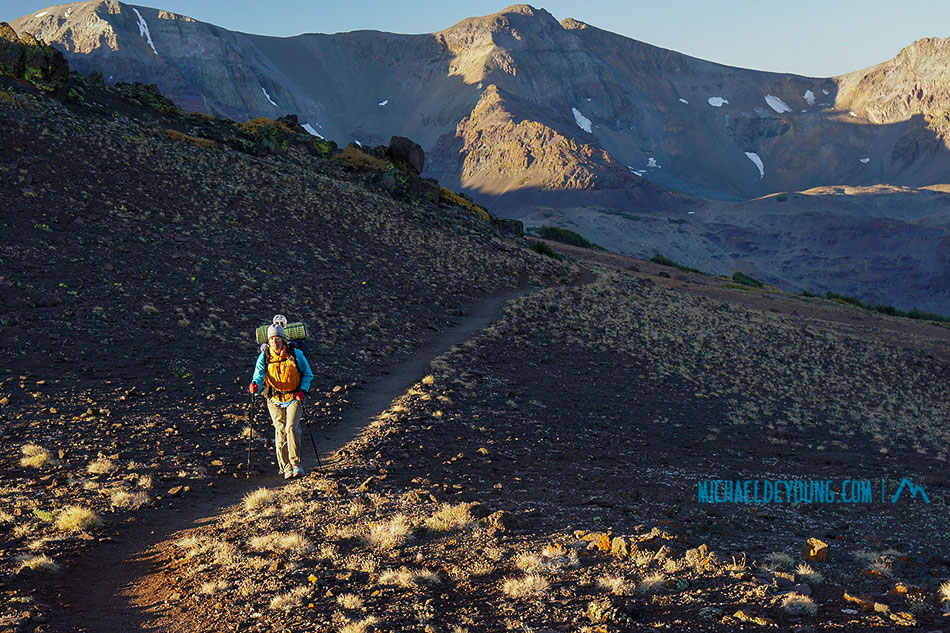 The first 8 miles southbound from Sonora Pass stayed on a high traverse above 10,000 feet with great views of the Emigrant Wilderness. Here we are up and going at 7:30am with sunlight streaming through a pass.

Watch out for Hunters. One of the things I don’t particularly like about the Guthooks App is that I feel it gives you tunnel vision of the trail and does a poor job at revealing when you are around a lot of jeep and ATV roads. The Halfmile Maps are a little better but for someone who needs reading glasses to see that map they are not much better. Unfortunately, we walked from Echo to Carson to Ebbetts Passes during opening weekend of deer season. Only one of the many hunters we saw wore any sort of hunter orange. Along that whole stretch, we could not escape the constant annoying frequency of Harleys, ATV’s or gunshots. After an 18 mile day, we did not realize we were camped a mere few hundred yards from a dirt road running parallel to the trail where we heard 30 rounds fired off near sunset and vehicles running up and down the road. Fortunately, things quieted down after dark. Let your presence be known if you are in a popular hunting area. I think it wouldn’t be a bad idea to have a lightweight orange vest.

Yeah, it coulda been a bear but probably wasn’t. I tell myself and others I talk with that just because you hear loud noises in the woods doesn’t mean it is a bear. Other big animals such as deer, elk, and cows step on sticks in the night in an otherwise quiet landscape. Even a raccoon or porcupine, neither of which are very stealthy, can cause a loud ruckus as they lumber across dry leaves or sticks. But there we were, camped at Dorothy Lake, just inside the Yosemite Wilderness where bear canisters are officially required. As usual, we were in bed near 7:30 with our bear canisters and an OR food bag with stuff that didn’t quite fit in the canister just hanging about 8 feet off the ground in a limber pine about 50 feet from the tent. Just after dozing off I heard the loud crash of a big animal getting ever closer to the tent. Lights on, voices yelling, hands clapping, it took about 5 minutes (an eternity in our mind) for the “animal” or Sasquatch to wander off. Out into the cold, we took our food to the next (unoccupied) camp about 200 yards away and went back to bed. Didn’t sleep well that night but the food bag was untouched the next morning. I guess we had nothing appealing for Sasquatch.

This leg, and especially the first 75 miles, was a test for Lauri. She has done amazingly well and I’m proud of how far she’s come. But it takes more than two weeks of sustained hiking to build your stamina up and get hardened “trail legs.” Given the shrinking daylight, the elevation gains and losses and having to carry bear barrels, she admits she is not ready for the highest of the Sierra. So we are skipping the 125 miles from Mammoth to Kearsarge Pass to Onion Valley TH and saving it to when she is stronger. After ferrying our vehicle around, we will complete the Tuolumne to Mammoth section then transfer south to Onion Valley Trailhead where we will attempt to hike to Kennedy Meadows South and end at Walker Pass before heading to Zion to teach our Fall Landscapes photo workshop.

It has been great to meet new trail angels, new SOBO’s and re-meet hikers we met earlier, including Spicerack and Crusher, and the Frenchtastic 4. Can’t wait to see those folks again. Back on the trail. Until next time … 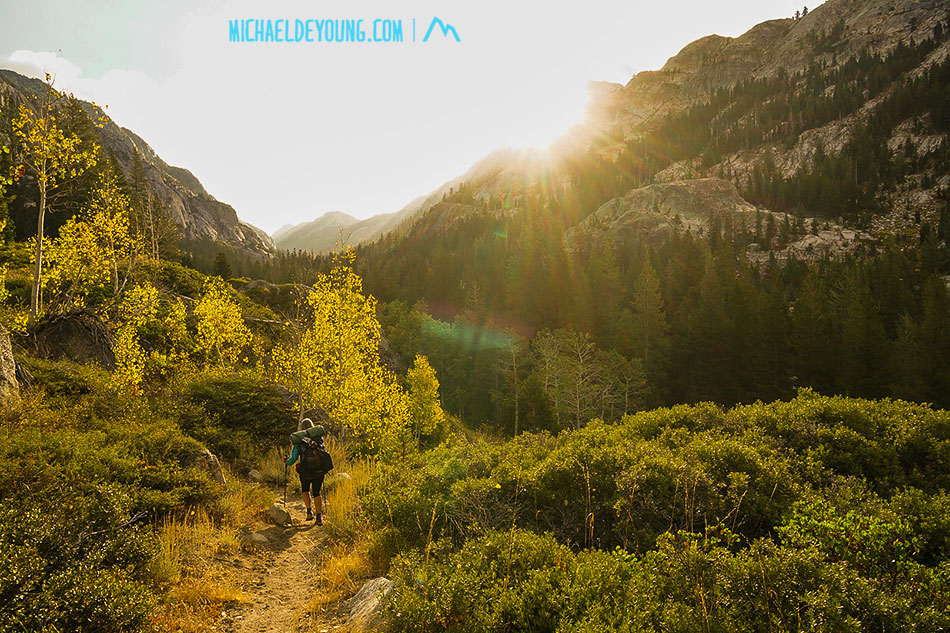 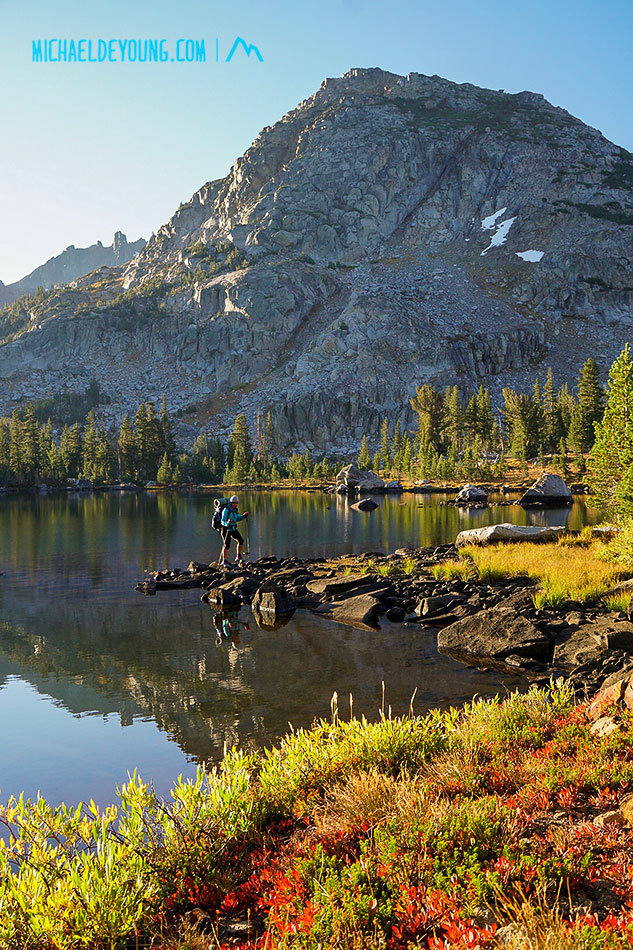 Fall colors at Dorothy Lake near first sunlight. We were filling water bottles as we were leaving camp. We left late this morning due to some photography of the calm lake and fall colors. 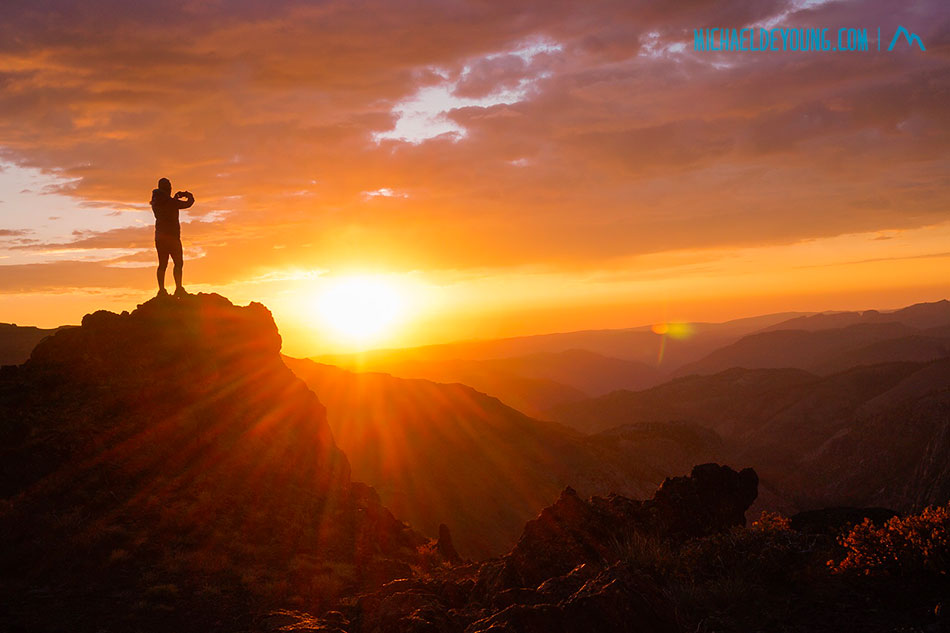 Lauri at sunset just a few feet from our high camp above 10,000 feet close to Sonora Pass. 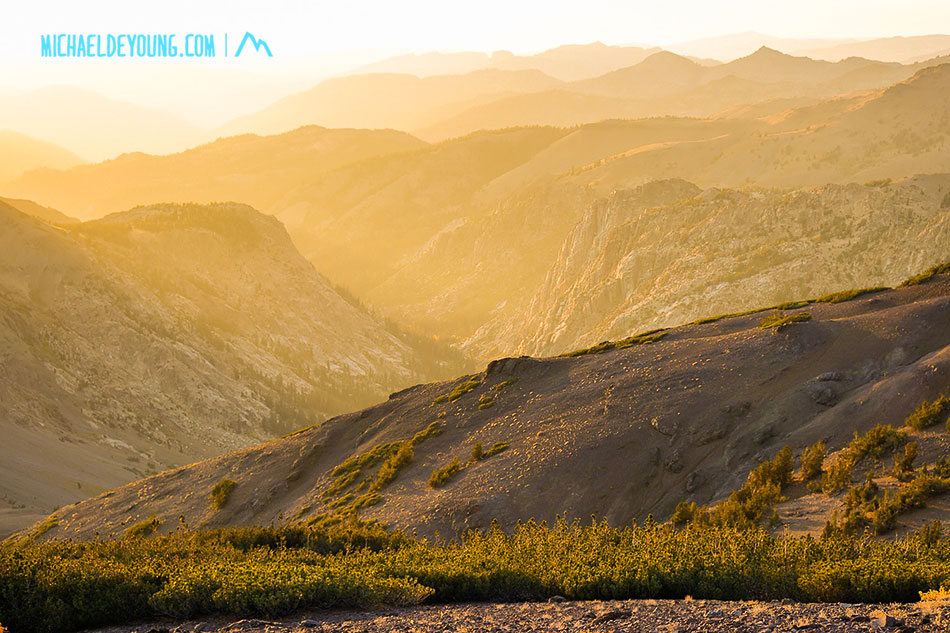 Back on the trail late in the day. Sunset above Sonora Pass above 10,000 feet. 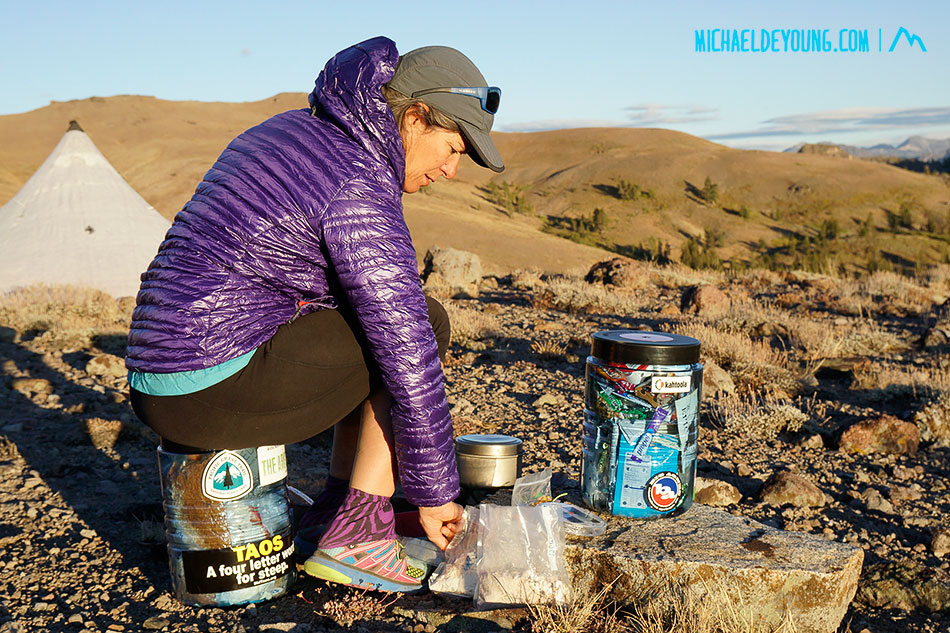 Dinner near sunset our first night on the trail in the Sierra. We camped too close to Carson Pass and woke up to brutally cold winds 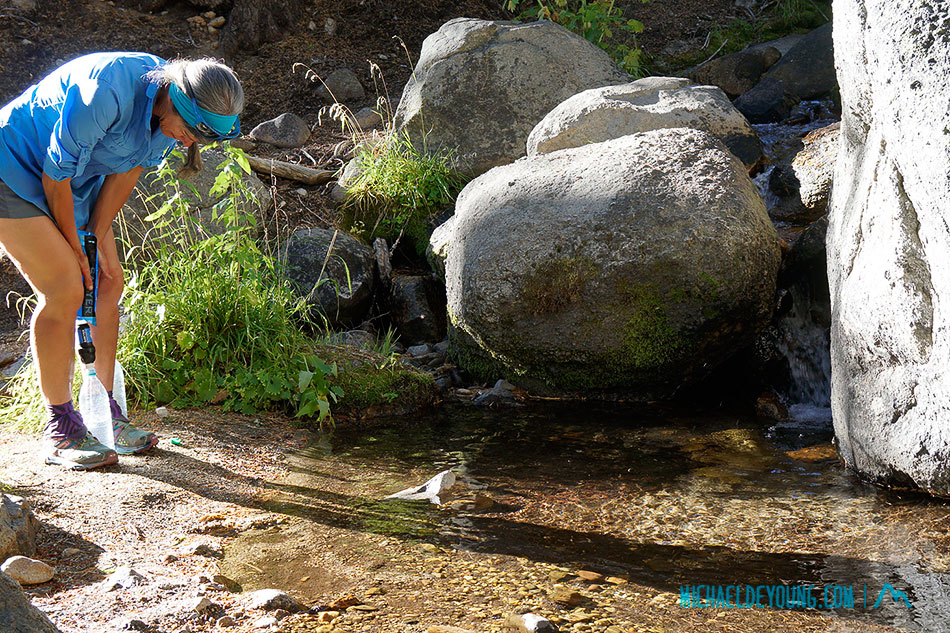 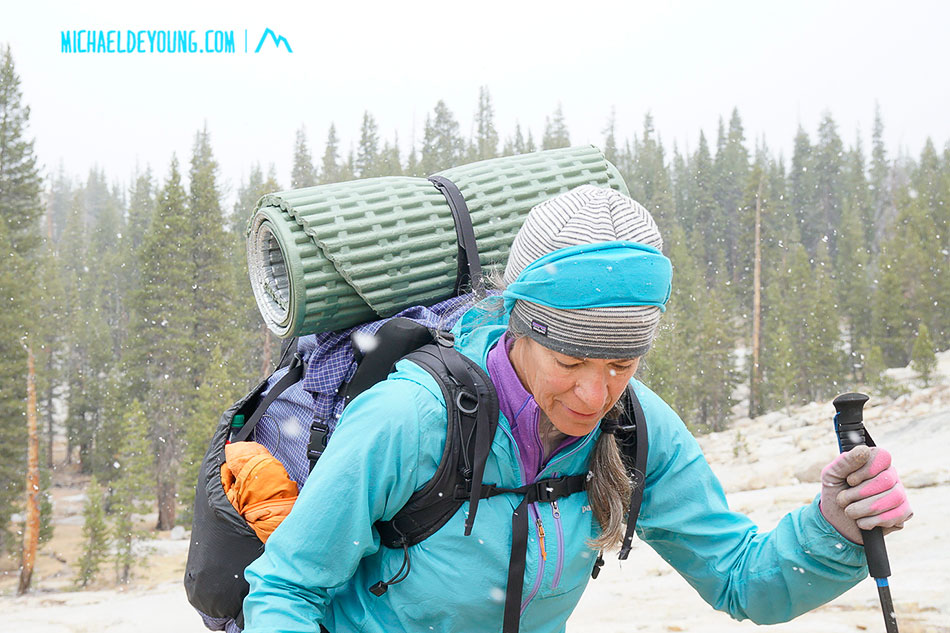 After a frigid mid 20s morning with frozen water bottles and fingers, we hiked most of the day to Tuolumne Meadows in beautiful soft, orographically enhanced stratiform snow. Around lunch time, the snow started sticking to the ground. 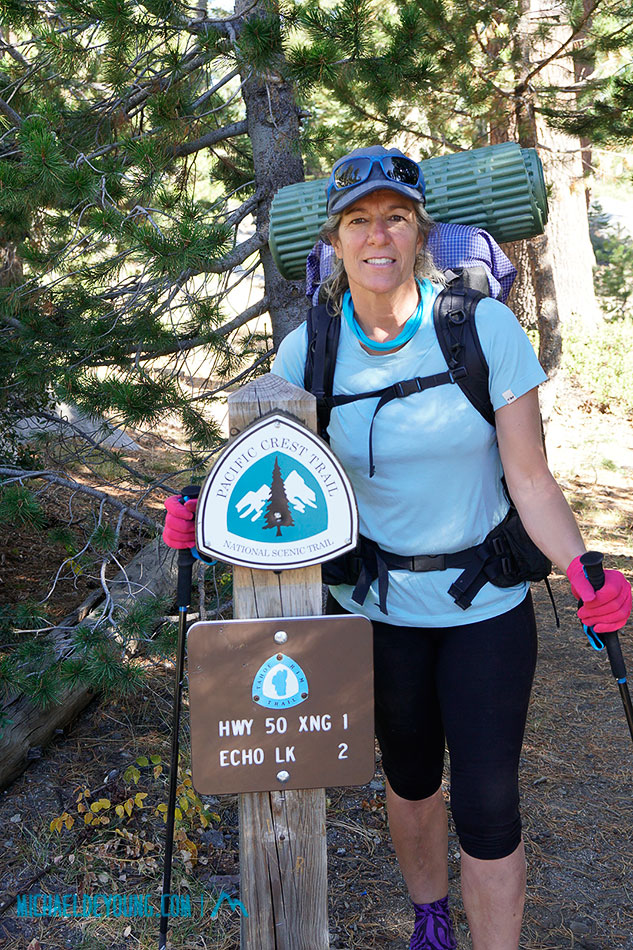 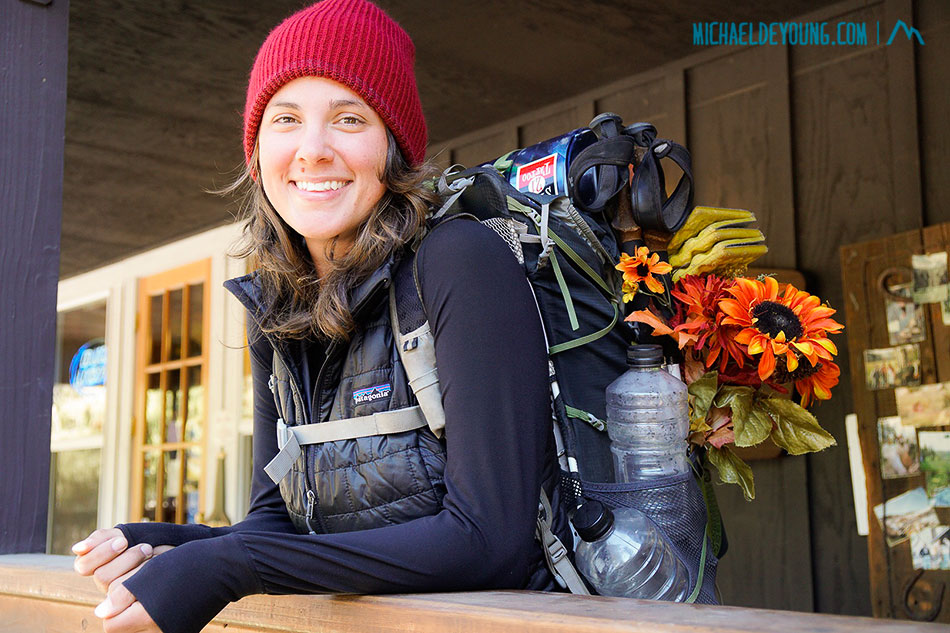 SOBO Spicerack at Kennedy Meadows Resort. She was given a “bouquet” of flowers to which she is carrying to the southern monument in Campo, CA. 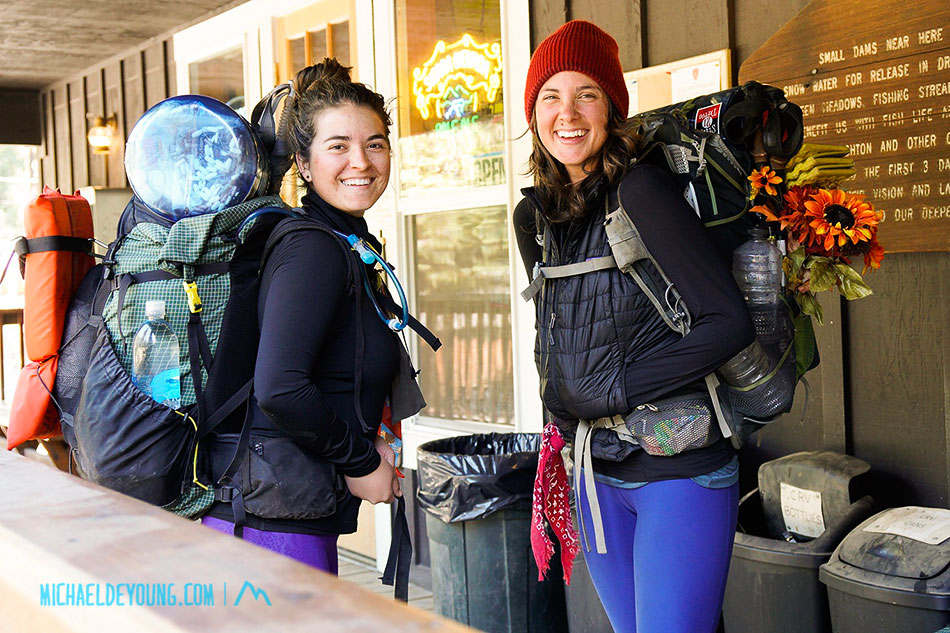 SOBO’S Crusher (left) and Spicerack were some of the first SOBO’s I met north of Harts Pass in Washington in July before any of us had trail names. We met on a cold wet day near Walker Pass. In a senior moment, I never took pictures of them that day like I should have. I was pleasantly surprised to meet them again at breakfast at Kennedy Meadows Resort. I was blessed with a second chance to make some images of them, although not in an ideal location. 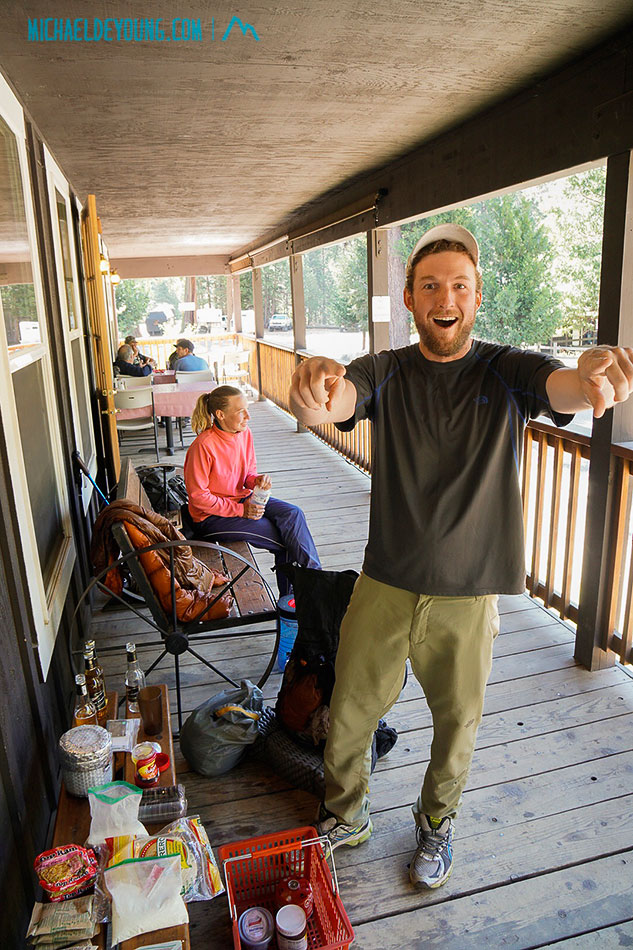 SOBO Hotwater (from Canada) and NOBO Honey Badger in the background at Kennedy Meadows Resort. We passed Hotwater still sacked out in his tent along the trail early in the morning. He passed us about lunch on our final day to Sonora Pass where we both hitched into Kennedy Meadows Resort for a Nero. (“Nearly Zero” miles hiked on a given day.) 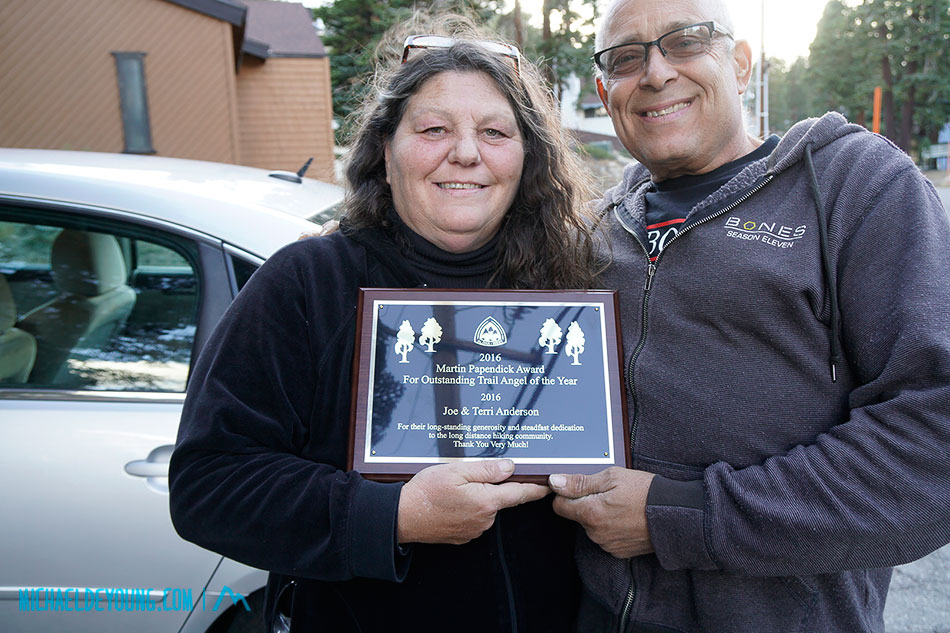 2016 Trail Angels of the Year, Joe and Terri Anderson of Casa de Luna gave us a ride from Lee Vining to the Davidson House Hostel in Mammoth Lakes. 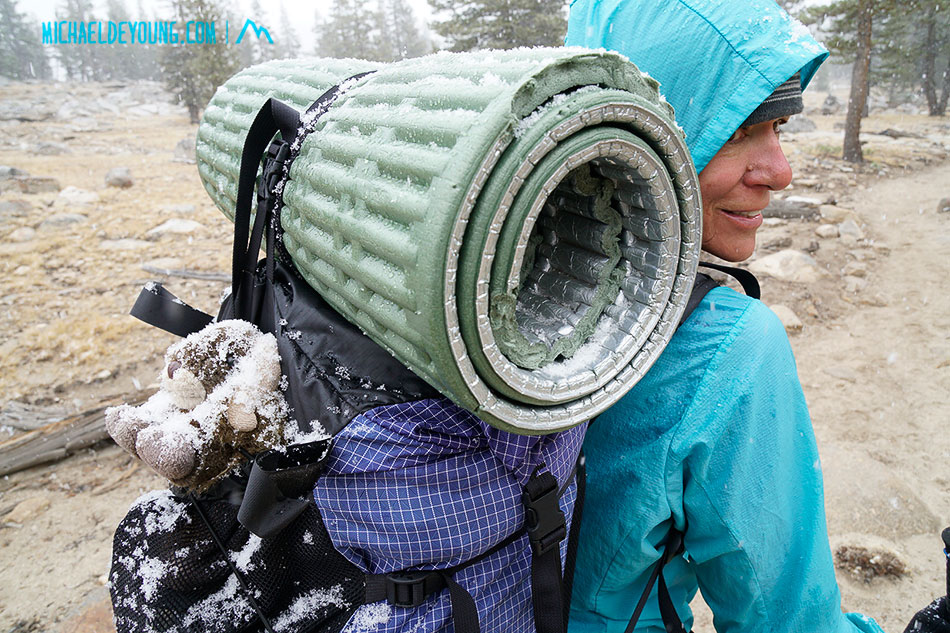 Horton, our muskox mascot, has been going on all of our adventures since 2003. Being an arctic animal, he welcomed the snow and cold more than most of us would.