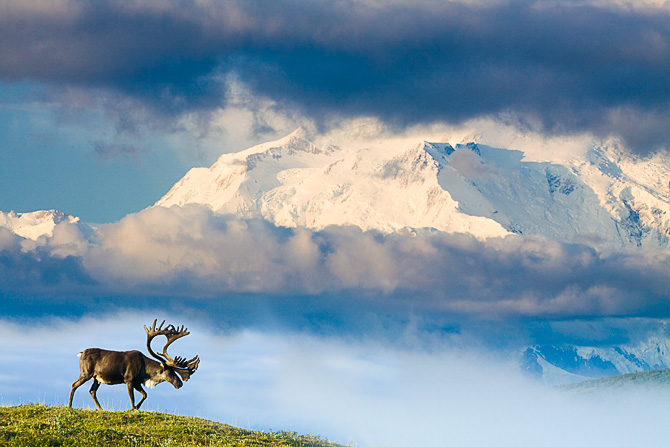 I was excited to learn that my caribou and Mt. McKinley image won first place in the 2011 Great Outdoors (Parks & Safaris) photography contest held by Photo District News. Photo District News (PDN), a Nielsen Business Media publication, is a leading photo industry magazine and is seen by thousands of photography industry creatives.

I have spent more time photographing in Denali National Park, 23 years, than just about any other place. This image was the result of luck, intimate working knowledge of the area and plain old persistence. I typically work the west end of the park from Grassy Pass to Wonder Lake where caribou and moose tend to be seen more frequently toward late summer and fall. My typical sleep deprived day starts very early trying to catch the early morning light on Mt. McKinley from Wonder Lake. The lake was in thick fog and after it seemed it wouldn’t burn off anytime soon, we drove east, climbing to near the top of the fog layer above the McKinley Bar when I spotted a bull caribou we’ve been seeing around for several days. Fortunately, I was able to position myself and sit tight while the lone bull moseyed on by where he would line him up with the mountain which was in and out of the rapidly moving fog. I got maybe 6 shots before he dropped out of sight over the ridge.