Why do I do this to myself? As of this writing on Dec 17, my image count for 2018 so far, which only includes the edited files in my Lightroom Library stands at 15,088. Any photographer can understand the agony of having to pick a baker’s dozen from 15k.

These represent some my FAVORITE images, not necessarily what I consider my BEST images though there is some overlap there. Trusted creative professionals who help with my portfolios and photo editors have picked some of these as my strongest this year but I’m mainly choosing those that have some deeper personal meaning to me. I could have easily picked 20. Or 15. But I’m sticking to my guns and practicing what I preach in my workshops. Edit tight! Less is more!

In 2018 I did 6 assignments, led 3 multi-day tours/workshops as well as 2 one-day tours, and, did several stock productions and personal trips which were mainly hiking on the Pacific Crest Trail, the Continental Divide Trail, and day hikes in Alaska. Surprisingly, most of my favorites were from personal and self-assigned stock productions.

Each image features a short location and subject caption, camera settings and a paragraph describing the story behind the image. They are in random order, not from least to most favorite. That would have been impossible to do. Here they are. 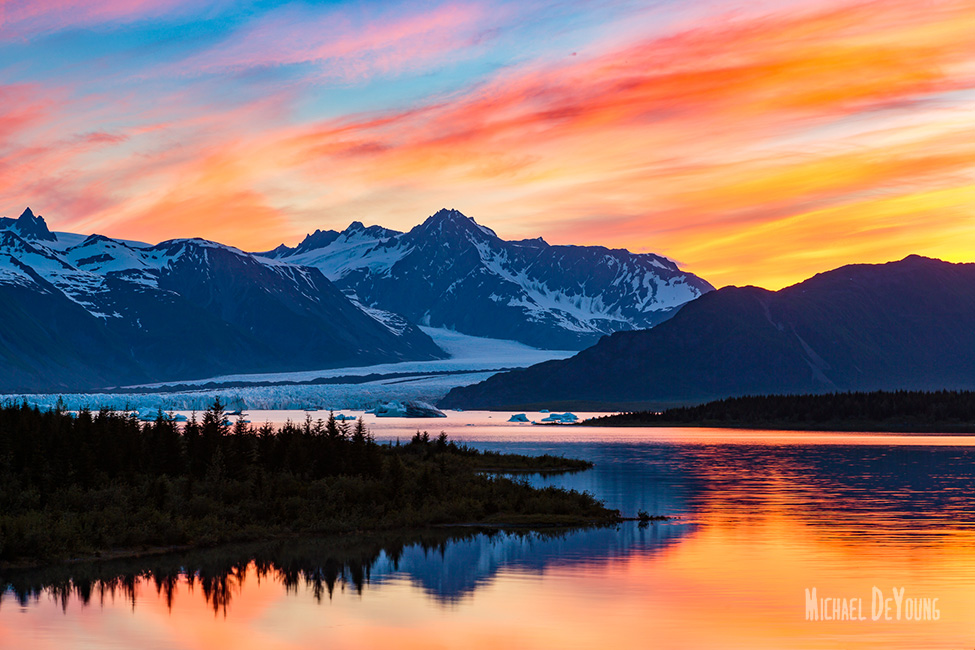 This was from one of my pre-planned stock productions. After a phenomenal and exhausting day photographing two of my favorite people who are both talent and friends, this was the last shot of the day at 4 minutes before midnight on July 5. 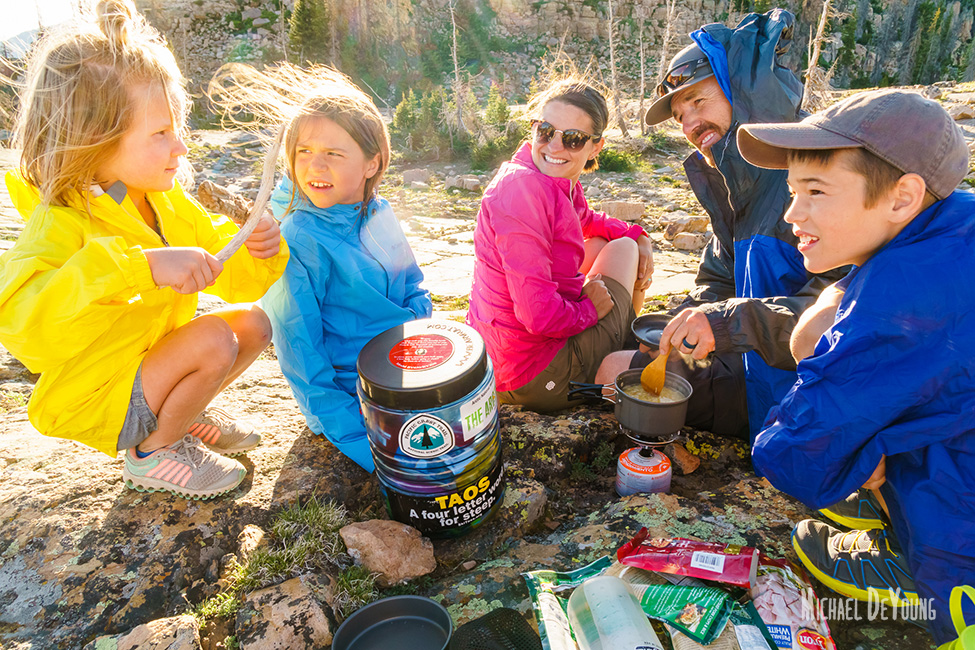 I’ve known and worked with the parents, Brooke and Scott, since they were dating, and with Brooke, the mom, since she was a teenager. Now they are taking their family on super duper adventures and we are honored to be with the kids on their first backpack trip. We hiked to a pass at 10,600′ in the High Unitas on a clear but chilly and breezy mid-June night. I was thrilled to catch the whole clan in a completely candid moment preparing dinner hanging around the stove and bear canister. We had a family group of mountain goats come through camp the next morning. The best part was the kids expressing how they didn’t want to leave and go back home. Super cool! 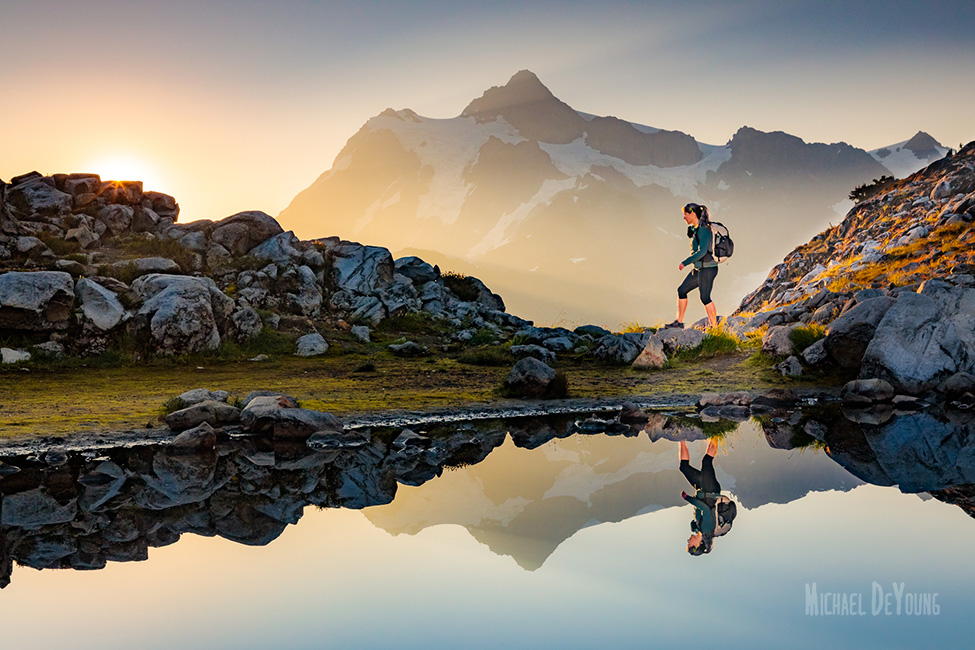 I’ve always wanted to see Mt. Shuksan, one of the most beautiful and most photographed mountains in the North Cascades. Most photos of the iconic peak are from Picture Lake and in the evening. We came here during a break between hiking the Pacific Crest Trail.

When shooting very popular places, I look for ways to do it differently and didn’t want a shot from the well established tripod holes at Picture Lake. Having hiked and scouted the evening before, we went back to Artist’s Point at sunrise to a small body of water, a remnant snow patch, that was no larger than your average living room and about 8 inches deep. Getting low, like a foot off the deck to maximize the reflection, I just had Lauri walk by several times as the sun rose to capture this. 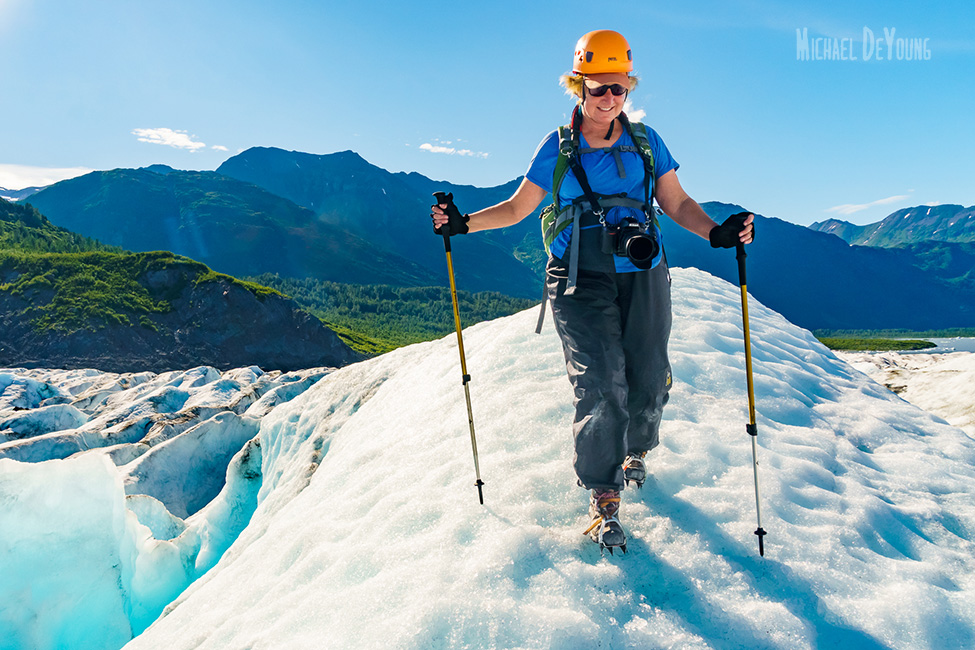 This is my long-time dear friend, Cathy, who is also a fellow pro photographer and damn near lifelong Alaskan, on my guided glacier landscape tour. I love this because it is truly a candid shot of her happy as can be to be in a beautiful location on a stellar but rare sunny August day, on Spencer Glacier. Cathy still takes workshops from me and has been a rock of support to me as my photography career has evolved over the past 25 years. 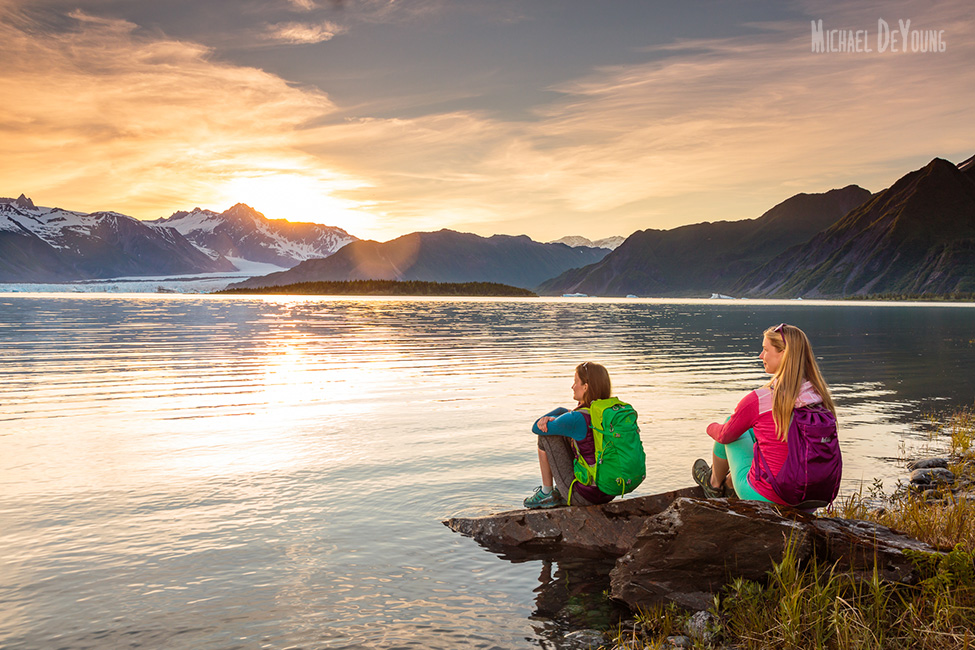 This was my favorite and most rewarding stock production this year with friends and great talent Kelly and Lila. I’ve worked with them for years. This is from a remote camp and we spent 1.5 days here shooting a lot of travel and adventure images. We are usually doing something active like hiking, climbing, yoga, paddling and they never complain about bugs, cold, rain, or walking out on a frozen lake in biting wind. I wanted a chill shot, so we just sat and enjoyed another magical Alaska scene near sunset at about 11pm. One of the other top 12 shots was from this same location 45 minutes later. When the weather and light are nice, coastal Alaska is just magnificent. 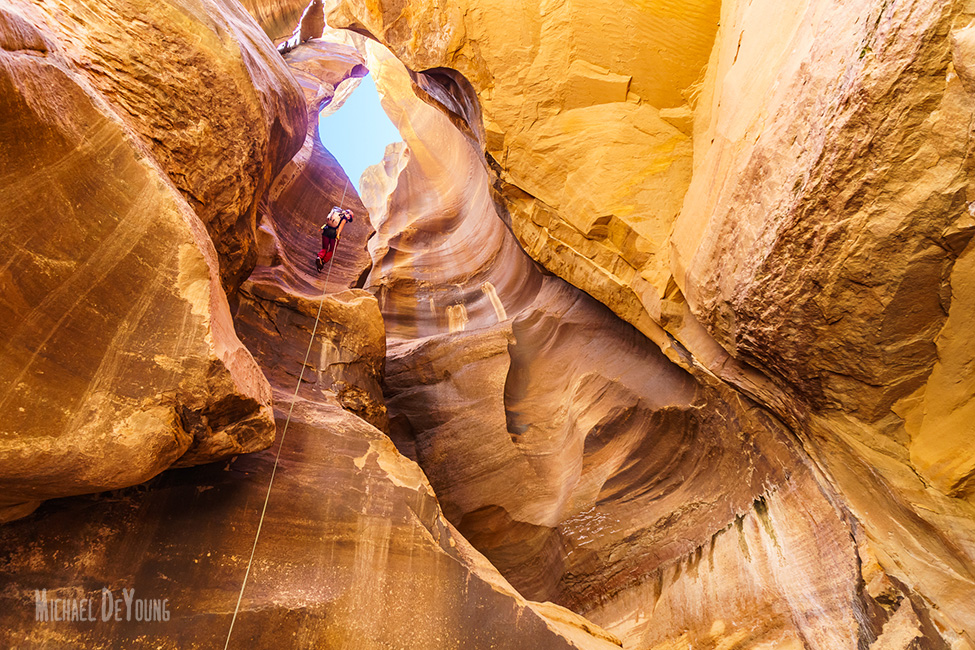 I was so fortunate to get to go on another Pine Creek trip with good friends from Zion Guru. Pine Creek is a technical slot canyon that requires a permit to visit. The last time Lauri and I did Pine Creek was in February when we did it with flowing water in dry suits. It was nice to do it in June and it was a great way to beat the 100 degree desert heat. This is Celie on the last rappel which is about a 100′ free fall into a beautiful emerald green pool. The main attraction in the canyon is the ethereal light and beautiful sandstone textures and patterns. 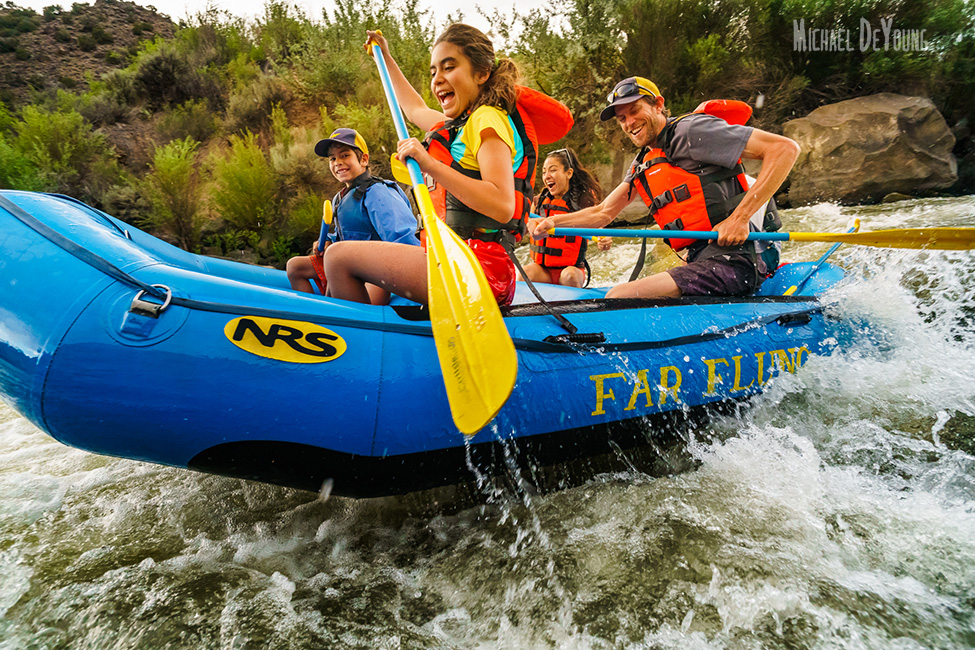 This was part of my assignment creating new marketing visuals for the Town of Taos. It takes almost no arm twisting to get me on the water for a shoot. It was a very low water year and the rapids were smaller but thanks to Far Flung Adventures and Pamela and family, we had a great shoot. Despite the low water I was able to make it look fun and captured them with candid expressions plowing through Souse Hole, the last rapid on the Racecourse Run. 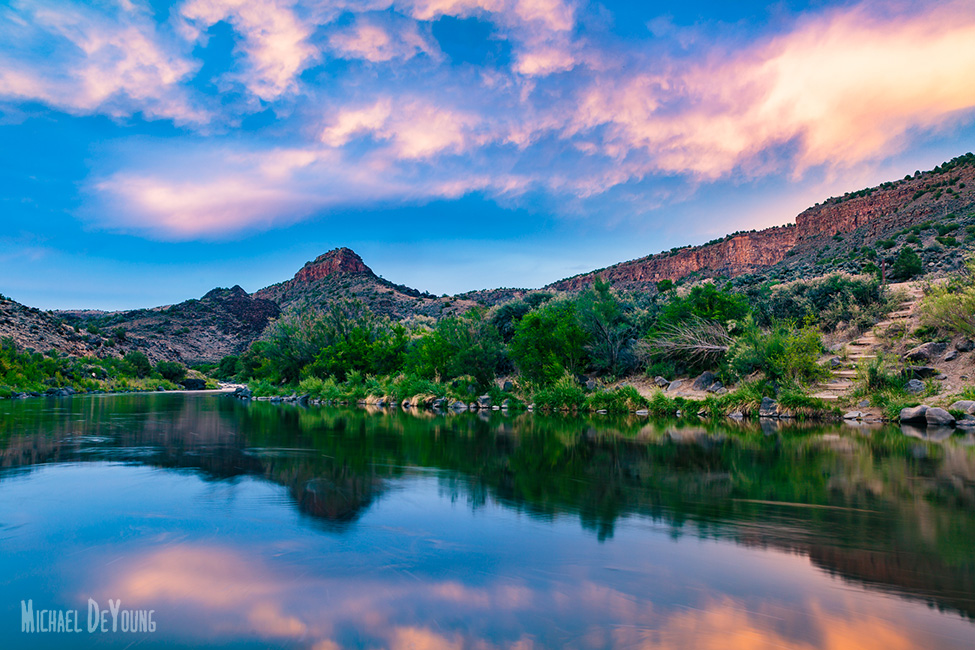 This is one of my favorite views of Rio Grande del Norte National Monument from the Taos Junction Bridge toward the confluence with Rio Pueblo. This is one of those shots where persistence and using my meteorological knowledge paid off. I have come here frequently only to strike out as this is a very difficult place to capture in optimum light. In a canyon bottom the light often goes flat as the sun sinks behind the western canyon wall well before sunset. The only time you get light like this is when cirrus clouds, as seen here, extend well above the canyon with clear skies where the sun sets. In most sunsets, scattered cirrus low on the horizon only turns color toward the sunset. On this day I finally saw extensive high clouds covering most of the sky except for the west. This was a predictable scenario where clouds would turn color across much of the sky and create the indirect warm light from the clouds that I wanted. It’s more about being there at the right time than technique or equipment. I just showed up and waited for the light to evolve. With indirect colorful light everything here fell within dynamic range of the sensor. All I needed was a polarizer to intensify the color and remove glare off the water. 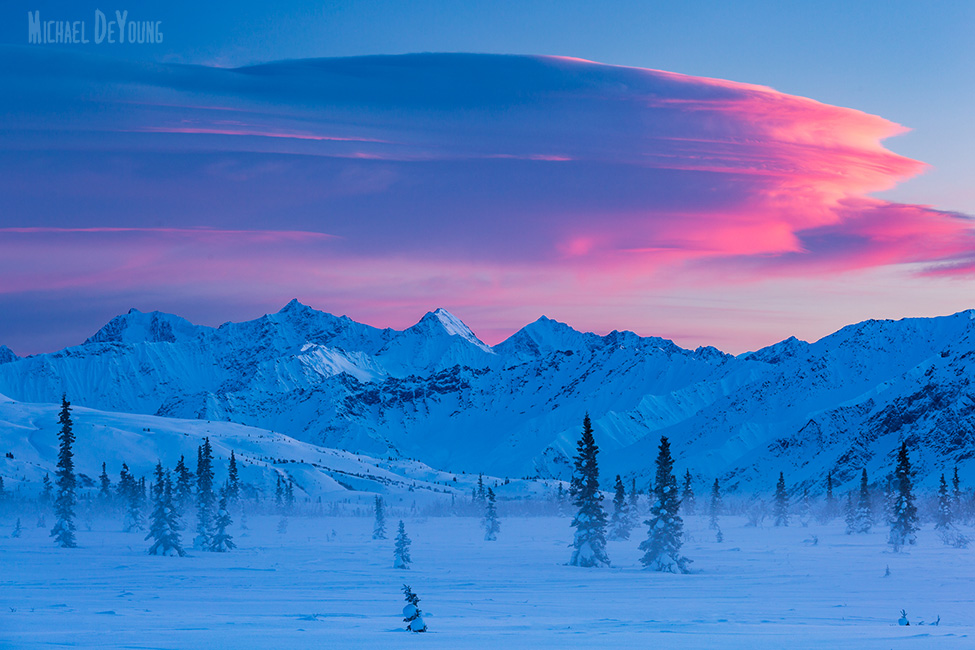 We went to this spot in anticipation of seeing aurora after dark. We got auroras but they were not stellar.

Over the years, the views off Alascom Road has always been productive for me. The area is a big swamp with shallow lakes and even in deep cold you still see a bit of radiation fog forming. In the far north, the coldest air is in low lying areas. Our rental car read -13F at sunset which is warmer than average for this location and time of year. 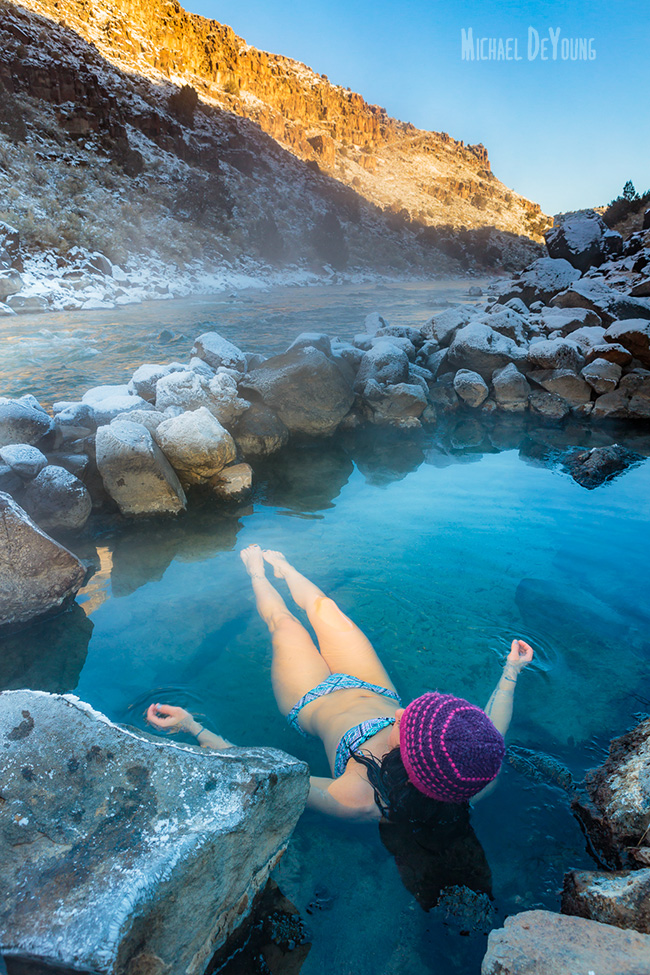 This was part of my 6-month assignment for the Town of Taos for marketing assets. Local dancer and fitness trainer and motivator, Julia, hiked down to Manby early in the morning in January at -9F. The water temp was in the 90’s. This was one of the few days where it was challenging to keep my hands warm while shooting as the sun never reached the canyon bottom during the morning shoot. Julia was a trooper dealing with the cold and hiking up and down in the snow – not to mention also being great talent for the shoot. 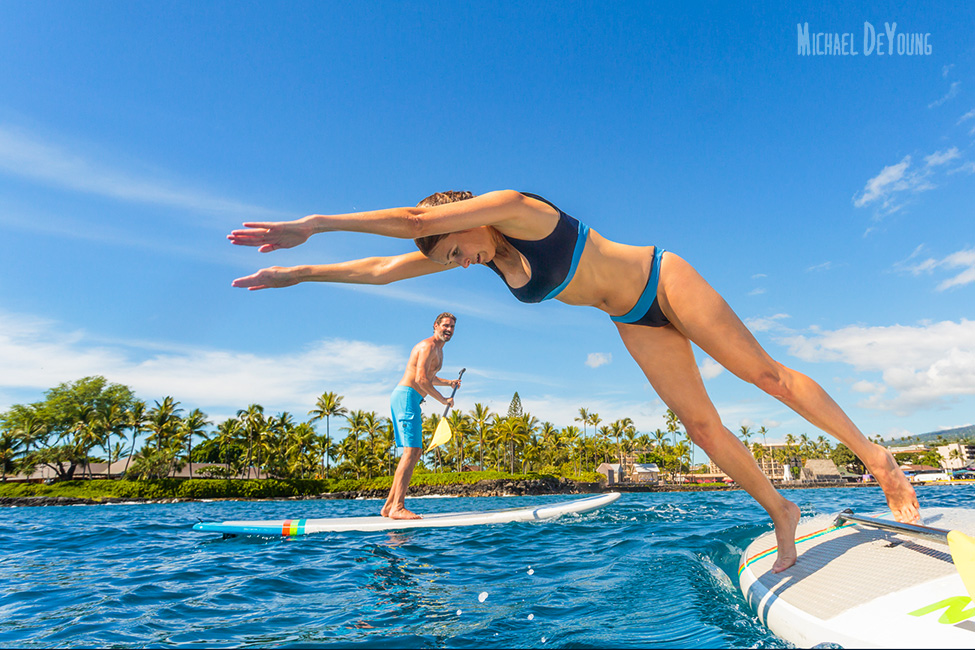 Kyna diving off her stand-up paddle board in Kona, Hawaii.

This is an off script shot from our assignment in Hawaii. Our two talent, Joel and Kyna, spent many hours that day in the hot sun paddling around. After all the key frames were shot, I got an opportunity to play a bit. It was still challenging to shoot in harsh mid day tropical light. Swimming around with my camera in a splash housing this was one of several shot ideas I had. I had to find a way to use the water and white boards to provide adequate fill light. 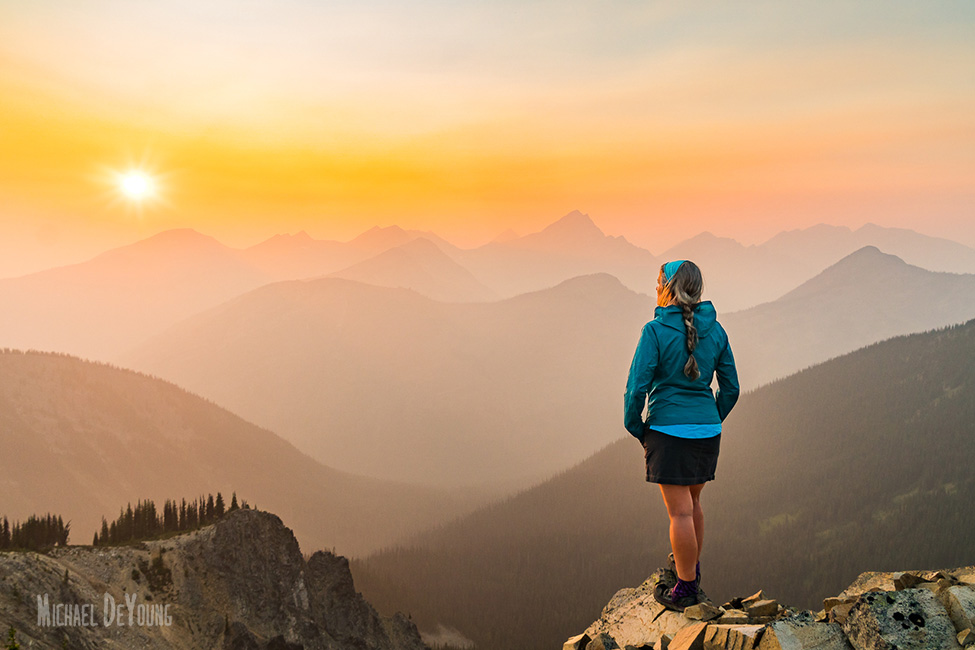 Sunset from camp on the Pacific Crest Trail, North Cascades, Washington, 8 miles from the northern terminus at the US/Canada border.

This was our longest day, at 23 miles on our longest continuous segment which was 112 miles from Hart’s Pass to the northern terminus to Stehekin, Washington. Heavy forest fire smoke dominated our entire hike. On our second day we hiked to the border then backtracked another 8 miles to this high camp at about 7000 feet. This was the view into the smoky sunset looking west toward Mt. Baker. This was the last photo of the day before we crashed our aching bodies for another 20 miler the next day. 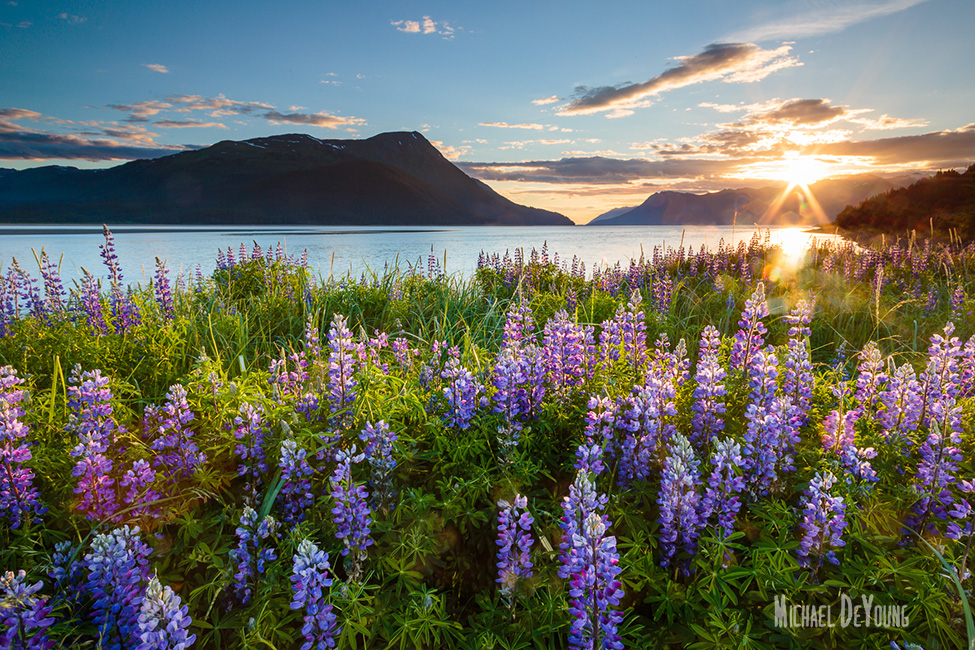 You would think I’ve had enough of shooting the same lupines and same background after 28 years but NEVER! There has always been a good reason to re-shoot a familiar scene and never get complacent with past successes. The reasons were: feeling more creative, better or different light, new film, new lens, new digital camera with a bigger sensor, wireless strobes, new filters – the list goes on. Unfortunately, these lupines are disappearing due to invasive species and road construction. I’ll admit it gets challenging to see the same scene in new ways after 28 years. But I keep telling myself to not dismiss the familiar. When all the good ingredients for a good shot line up, you shoot it!