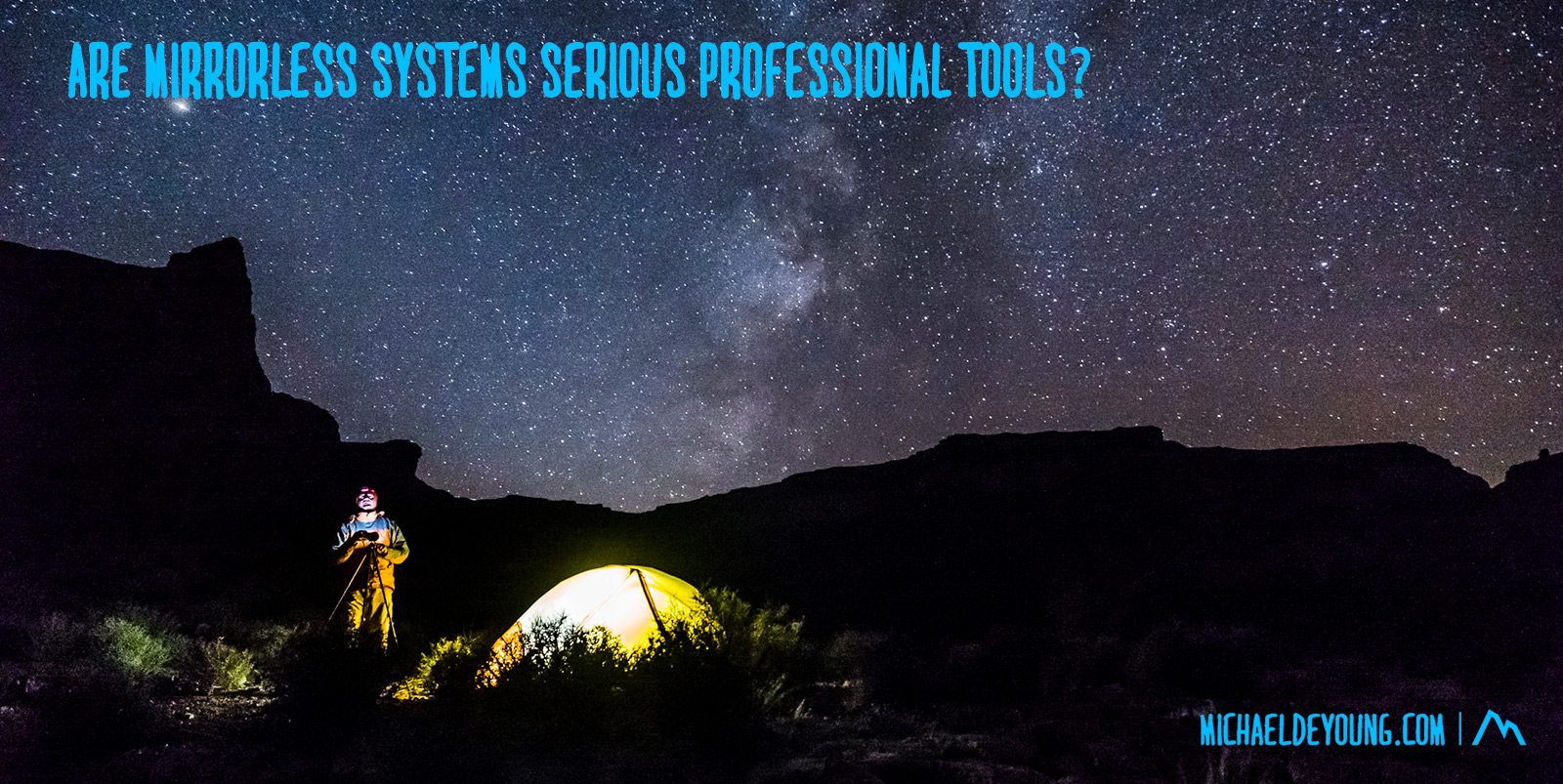 Ike shooting the stars with his A6000 from camp on the Tonto Trail in Grand Canyon National Park. I shot this at ISO3200 at 15sec. @F/4. Focusing at night is a little tricky with an electronic view finder (EVF). In low light there is a lot of noise and I used the MF mode which magnifies the image for focus assist. It helps a lot but takes getting used to. Ike is illuminated by his Sony’s LCD. My image at ISO 3200 looked amazing and moving the luminance and color noise sliders to about 45 in Lightroom resulted in a beautiful image. The smaller lenses allow more depth of field than the equivalent full frame focal length.

There is a wealth of reviews of virtually every piece of photo gear made, both on dedicated review sites as well as thousands of customer reviews on retail sites such as B&H. My review is not meant to re-hash what’s already been revealed. My goal is to offer a performance perspective from a working pro with broad outdoor photography interests. This is non-scientific review about quality and performance of this camera. Is this $1000 smallish camera body a serious professional tool capable of performing and delivering pro results?

Last spring I knew I had to get a different outfit for the type of hiking, canyoneering and skiing I do. I was tired of carrying heavy Canon gear long distances along with all the other gear I needed. Every pound adds up. With my plans to hike long sections of the Pacific Crest Trail getting a lighter outfit without sacrificing pro results and performance was critically important to me. I looked at a lot of options including using a lighter entry level Canon DSLR with my existing lenses. That option seemed to offer very little in weight or cost savings. 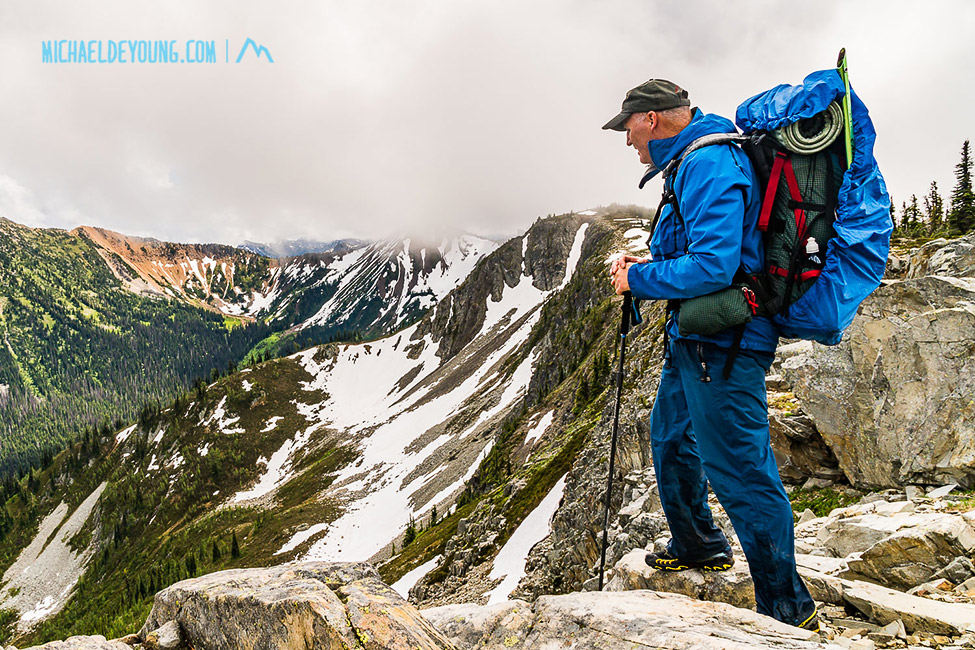 Self portrait on the PCT in Washington’s North Cascades, 4 miles from the US-Canada border. The camera is on a mini tripod with 10 second self timer. The first 10-days of my hike were wet and cold. The Sony in the f-stop’s Navin Pack mounted on my chest remained pretty resistant to the near constant wet and cold. I never had any condensation problems in the lens.

This was an agonizing decision. I looked hard at the modern crop of 1” sensor point and shoot cameras. They are fantastic, fun to use travel photography tools with great optics and zoom ranges. I just wasn’t ready to go that small and sacrifice not having files I felt were suitable for large prints and large magazine use. Going with the full frame Sony A7R only saved weight on the body. The full frame lenses are as heavy as the Canon L lenses, so no real savings with a Sony full frame system. So I settled on the mirrorless APS-C system.

After all the years of shooting pro level Canon DSLRs with L series lenses, it was hard to believe that now I was holding a camera and lens (24mp with equivalent to a 24-105F/4) literally a third of the weight, size and cost that was capable of delivering images of equal quality. Since acquiring the A6300 with 16-70F/4 last I have landed a 1.5 page spread and cover of Backpacker Magazine with this camera/lens. 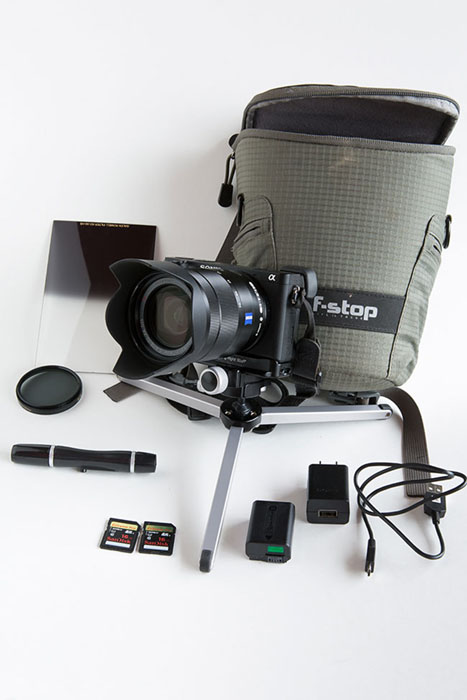 Initially purchased for a niche landscape outfit for personal backpacking trips I have since used it on ski action and backcountry adventure work for both stock projects and on assignment. More on that later. With a smaller base outfit, everything else I need is also smaller like filters, cases, tripod head and camera plate.

Prior to the A6300 I was not a big fan of cropped sensors. In fact, I sold my Canon 7D and 50D a month after purchasing it. The files were inferior to me compared to the original 5D. I don’t know what Sony did with their cropped sensors, but they are considerably better than the earlier Canon cropped sensors.

When new cameras come out, reviewers go hog wild with descriptions of all the technological advancements. No camera/lens combination gets any consideration from me unless the optical quality for big prints and pro results is there. That’s the foundation. Beyond that, I try to see through all the hoopla and remind myself that ALL cameras are still the same basic thing: a light proof box with 2 functions – exposure and focus. The ease and accuracy of the 2 basic functions determines performance. I value performance and practical function over whiz-bang bells and whistles, most of which I never use.

There are 5 functions and operations I use and change regularly when my eye is to the viewfinder. They are:

The ease of using the 5 functions mentioned above is why I chose Canon in the first place years ago. The layout and ergonomics just made sense to me. The A6300 has some serious performance and ergonomic design issues to improve upon. I can’t reduce the size of my hands without serious loss of blood, so I don’t know how much smaller they can make camera bodies. Sony can, however, put a little more thought into button and dial layout. For example, I operate mainly in Aperture Priority mode. I change the aperture setting by spinning a wheel with my right thumb. It is easy to accidentally change the shooting mode as that wheel is close and similar in feel when your eye is in the viewfinder concentrating on the image! The thumb wheel is too small and often jumps functions. I can’t just change focus points unless I turn the focus point selection on. 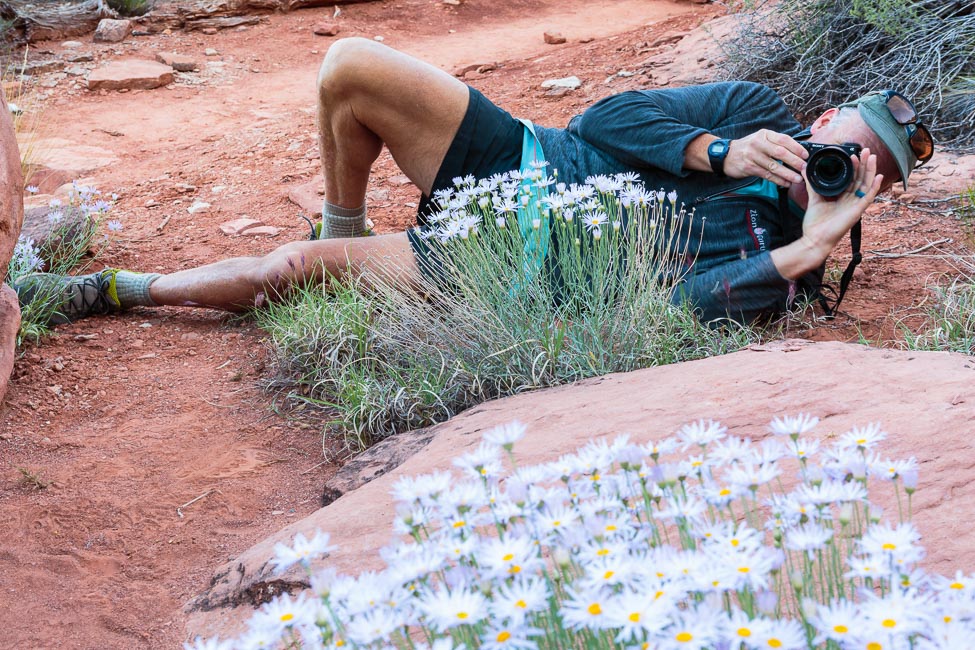 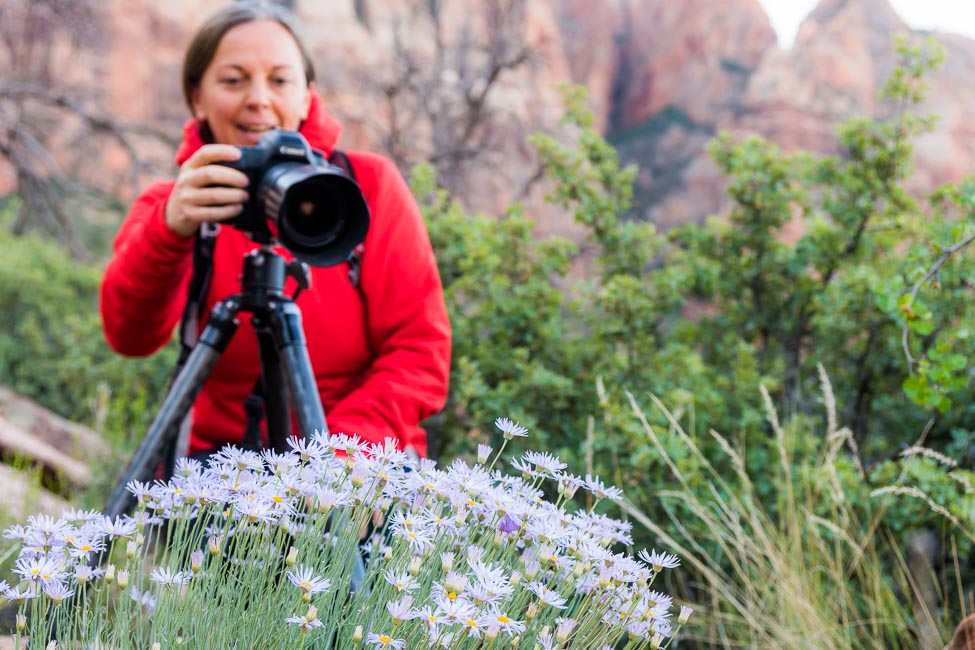 This is my friend Catrin, with my Canon 5D Mark III with Canon 24-70F/2.8 L on the Really Right Stuff tripod and head. This is what I saw while lying on my side in the previous image. The Sony A6300 has liberated me somewhat allowing enjoyable photography when I need to be light and mobile. HOWEVER, I am not ready to sell off my Canon system. On important assignments and all day shoots, the Canon still reigns supreme.

Performance as a landscape camera. The Sony A6300 has everything you need to create excellent landscape images. And you never have to lock up the mirror. My favorite mode is DMF (Direct Manual Focus) where the camera lets you set a focus point, and uses a keyed color display to tell you what is in focus and what is not. I find this very useful. I can turn the focus ring and the camera will do a 5X magnification to assist with critical focus. This has been helpful in twilight shooting. When on a tripod, Sony recommends turning IS off. On the Canon, this is a nano-second flip of a switch on the lens barrel. On the Sony, I have to press 3 buttons needing reading glasses to get to the same point. Again, they have all the right stuff. They just need to improve performance. Switching IS modes should be a one button function. 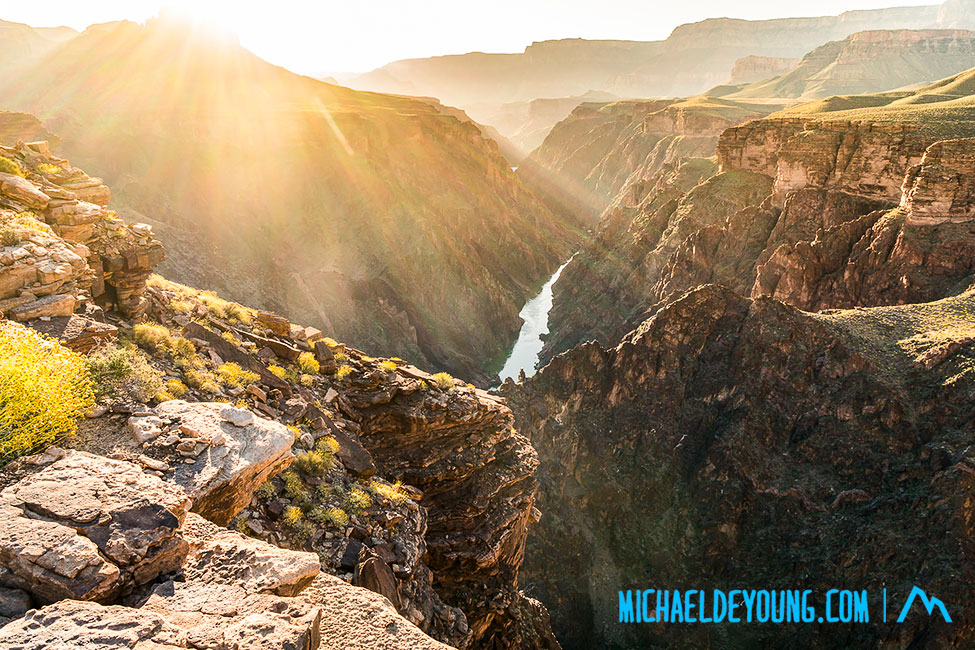 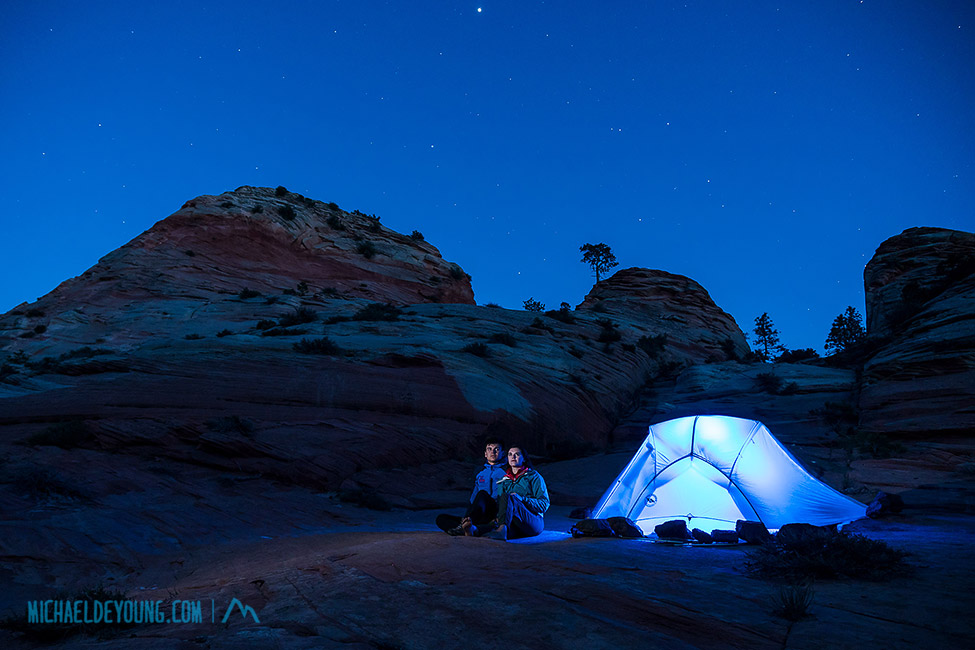 Emily and Jordan Star gazing in the Zion backcountry near Northgate Peaks. Sony A6300 with Sony-Zeiss 16-70F4 lens at 16mm. ISO1250, 8 seconds @ F4. The DMF (Direct Manual Focus) mode was the most helpful. By pressing down the focus button while turning the manual focus ring, the camera does a 5X magnification, allowing easier focus on the tent and couple in low light.

Performance as an action camera. All new camera systems seem cumbersome at first. Thankfully, I stuck to the golden rule of never using an unfamiliar camera on an assignment. I am also glad I waited until I’ve used this camera for 10 months before writing about its capability as an action camera. I wanted to rule out the bias of newness and learning how the camera functions. Although I’ve used the A6300 on a ski action assignment and a backpack assignment with success, I still believe the A6300 really needs help as a performance action camera. 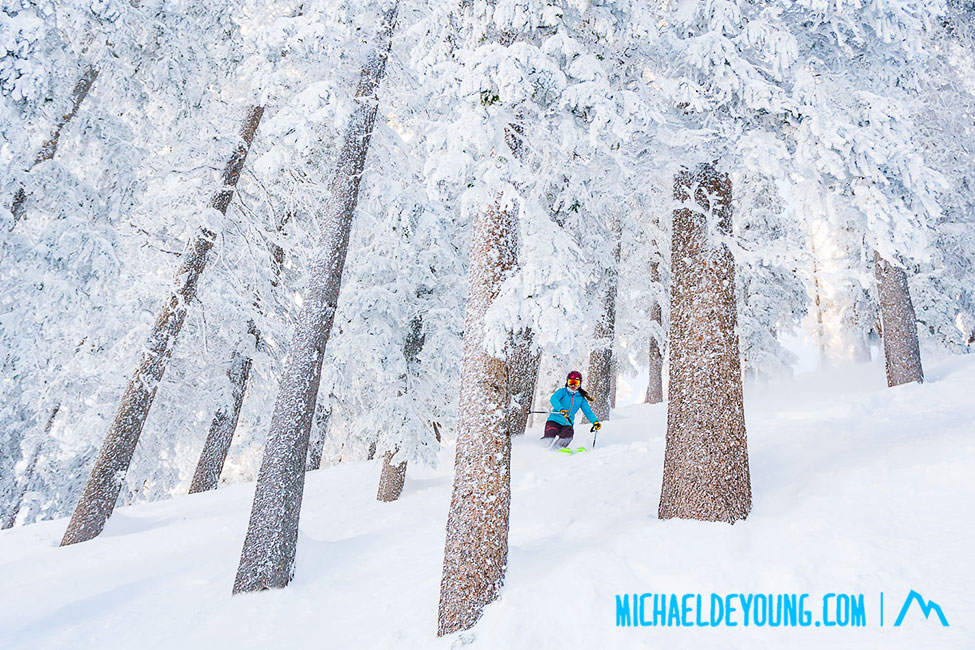 This is from my first winter stock shoot with the Sony. We had single digit temperatures and the Sony battery, NP-FW50, drained fast. But, the AF-C focus mode did will tracking this skier in the trees in flat light. 16-70 Zeiss lens, 1/400th second @F5.6, 400 ISO 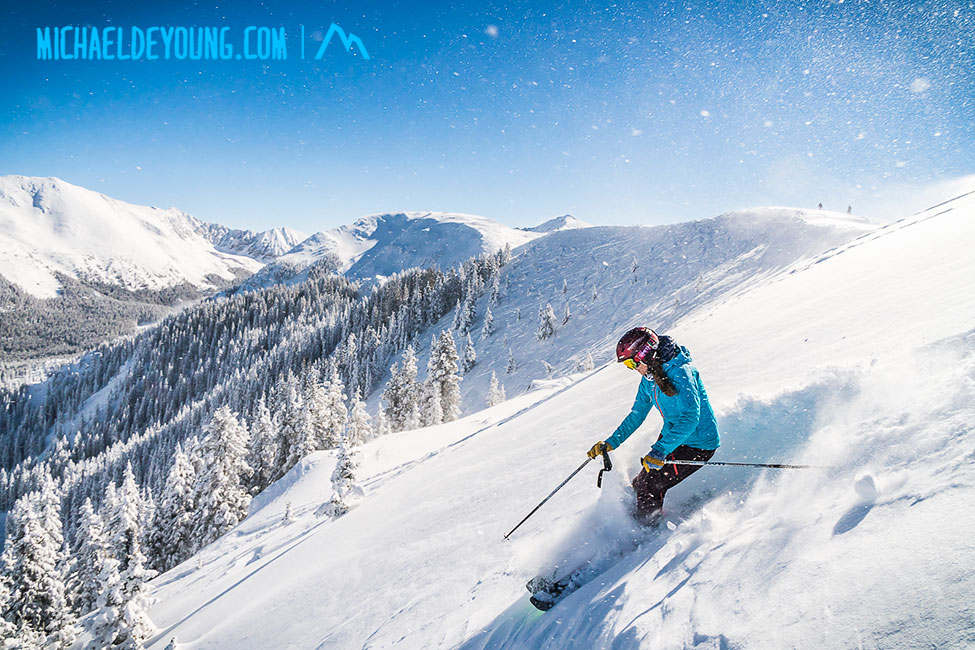 I did a few stock shoots with the Sony before even considering using it on a paid assignment. This camera has trouble locking focus in strong backlight in continuous (AF-C) mode. With grainless images at ISO 400 and with lots of bright light I was able to zone focus this image using the DMF (direct manual focus) mode with the viewfinder indicating what was focused and what was not, using a keyed color display, at 1/1000 second at F/11 at 16mm (24mm full frame equivalent)

These were shot on assignment where I finally had some confidence in the AF-C focus mode. We had a very advanced skier flying downhill with trees between him and the camera. I shoot in conditions like this frequently and have developed the motor skills to keep up with my subject. The sensor stayed locked on the skier on this sequence even though trees were moving rapidly in front of the selected focus point.

They boast about their fast frame rate (11fps, almost double the 5D3) and speed and accuracy of their hybrid phase and contrast detection focus systems. You have more of the sensor available to you for focus points allowing more flexibility in image composition with moving subjects. The focus tracking accuracy (AF-C) in backlight is dismal. In most other situations, it is great. With phase detection, the camera doesn’t “search.” It knows it needs to focus closer or further and it locks on very fast. Like any other system, focus performance accuracy varies from lens to lens. The 16-70/F4 Sony-Zeiss is much better than the 12/F2.8 Zeiss Touit. 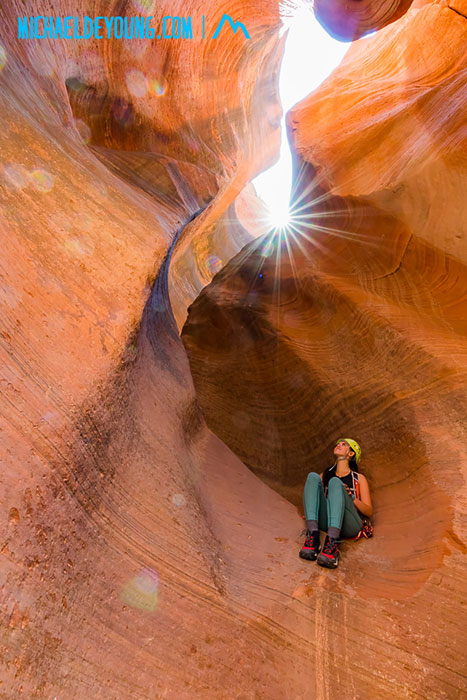 I had to learn to turn off the auto review feature so I can track my subject live as I’m shooting an action sequence. They don’t make it obvious or easy to do this and at first I couldn’t track a subject because all I saw in the electronic viewfinder was a review of the first shot I took. The Sony does everything you need to do for action work. It is just more clunky than using pro level 1 or 5 series Canons.

I’ve witnessed 2 major camera technology revolutions in my career as a photographer. The first was autofocus lenses in the early 1990’s. First seen as gimmicky and a crutch for hobbyists, predictive autofocus with multiple focus point selection changed action photography standards forever. The next tectonic shift was, of course, the transition from film to digital SLR cameras. No elaboration needed. In a practical sense, mainly for commercial work, film is long gone. I think we are on the verge of a third major shift. I believe mirrorless cameras with interchangeable lenses along with the evolution of smartphone cameras will make the digital SLR near obsolete.

Over time, Sony will hopefully improve the current ergonomic and performance shortcomings and mirrorless image making bodies will out perform the top pro bodies we know today. This is just a prediction and I don’t know when this will happen. It’s not going to be in the next 12 months but probably within 10 years. Glad I jumped in on the upward emergence of mirrorless cameras as serious professional image making tools. 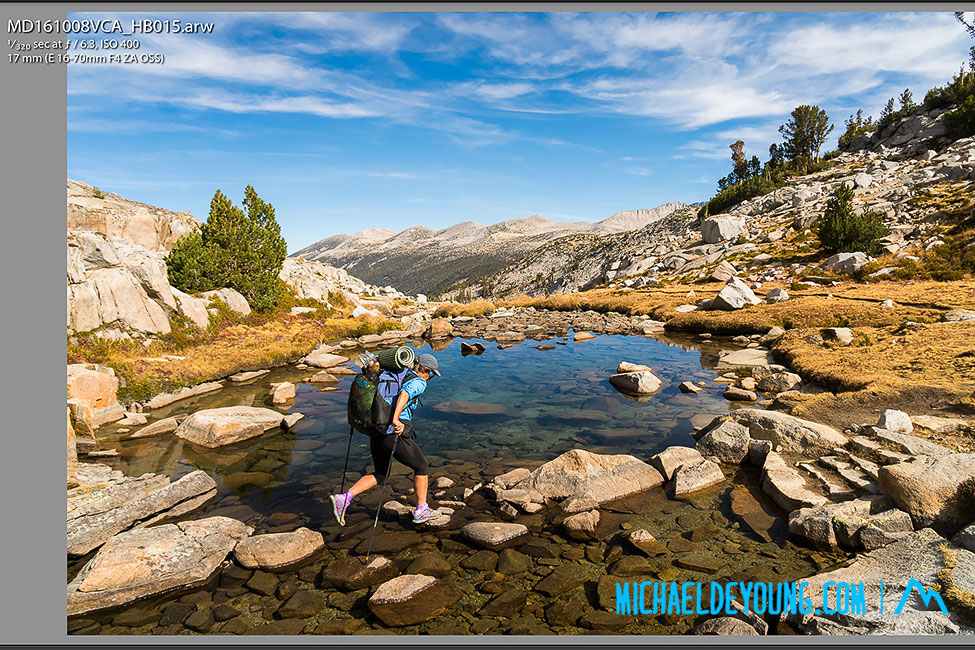 This is a screen grab from Lightroom showing how an image looks with my default develop preset I made for this camera. In normal daylight, the focus tracking, or zone focus, worked great with a distant action shot of Lauri hiking the High Sierra last fall. 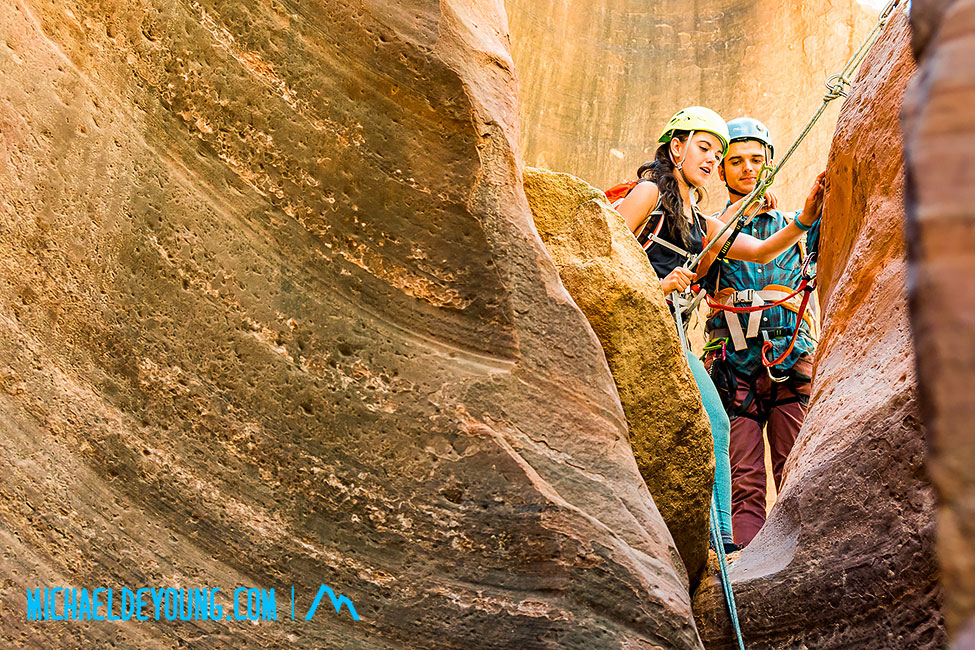 The smaller Sony has made it much nicer to shoot in tight spaces with low light such as in slot canyons near Zion. A lighter load with smaller camera pack makes rappelling and down climbing in narrow walls easier. 16-70 lens at 43mm. ISO800, 1/100th second @F4.5